Oh, how I love examples of creative body work.  It seems the Kroger parking lot has yet again yielded me rich comedic fodder.  I wonder if the duct tape is simply holding the front fascia on or if the unfortunate owner of this POS is asking duct tape to do more than it was ever intended to do.  I don’t think the celebrated silver strapping would be terribly effective as a weatherstrip, so whoever is sitting in the driver’s seat better be prepared for a wet butt on rainy days.

I have driven things worse than this, but not by much, and that was a very long time ago.  When the air was dirty, sex was clean, and Steve Perry looked awesome in Spandex. 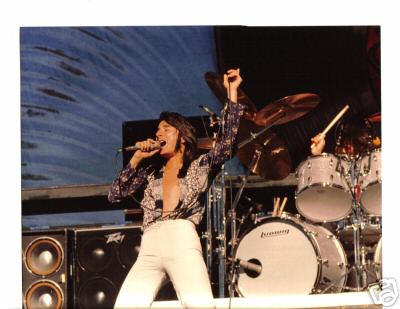 Last night I was treated to an impromptu road trip to Cincinnati to pick up Steve-o.  I was also reminded why I don’t buy used cars with the exception (and I wouldn’t do it now because leasing is not a good option for me any more) of my own lease returns.  He bought that tasty Audi he was eyeballing forever back in September, and it appeared to be well-maintained.  He did his research and inspections and for all intents and purposes it seemed to be a good solid ride.   For what mysterious reason I have absolutely no clue, he decided to have the ECM flashed to change the presets- the things that motorheads will do in the name of performance- only to have the clutch plate fall apart on it as they were pulling back into the shop.  It was an interesting failure- the pressure plate springs were bent, the disc itself was warped and missing pieces of lining, and the rear main seal was leaking to top it all off.  Then again anyone who replaces a clutch without doing a rear main and input shaft seal is a bloody fool.

Pity be on those technicians, as putting a clutch in an all wheel drive car (worse than a 4X4 truck by all accounts) with a longitudinal engine (longitudinal: the crankshaft runs from the front of the car to the back, rather than transverse which is side to side- most front wheel drive cars have transverse engines) is no easy task.  I really pity them if Steve-o doesn’t get his car back tomorrow after paying the extra freight to get his clutch goodies overnight.

I figure after 20 years I might not get stuck being his deus ex machina every time he gets in a spot, but at least I’m not paying for this repair work. I got off easy just having to get him and Spencer and cart them back as far as Columbus.

As the return roadtrip progressed and I treated the boys to dinner at Taco Bell (I am still paying for that 5 layer beefy burrito, but where else can three people eat for $17?) the conversation somehow turned to creepy things.

Dad and Spencer had the misfortune of meeting up with the male biological contributor of Steve-o’s DNA at a car show last summer.  He thinks Spencer is Steve-o.  That’s fine with me.  It’s also fine with me that I didn’t have to witness his transformation into Jabba the Hut.  Jerry has his faults, but he would never be mistaken for livestock or for a beached whale.  Apparently my illustrious ex has gotten a tad bit portly in the past 16 years.  However, the way Spencer described him, it sounds as if he’s munched and pieced and gorged himself into the “morbidly obese” category.  Sad thing, that, especially because I can remember a time when he was not only thin, but obsessed with remaining so.  I wonder what the hell happened – for a minute- but in the grand scheme of things, since I don’t have to pay for his chow, replace the furniture, smell him, or clean up after him, I could pretty much care less.

Any dude with a swinging johnson (one that works anyway… but I really don’t want to go into my musings on the sad and deprived world of ED) can be the male contributor of a child’s DNA.  That doesn’t take brains.  I am sure that if one were to investigate the number of convicted felons, chronic government moochers, correctional institute inmates, and so on that it could be proven that some of these low lifes have sired many offspring.  There are plenty of “baby daddies” out there who have done absolutely nothing to contribute to the physical, emotional or spiritual maintenance and growth of their offspring.  For these types of scrounge puppies I have nothing but contempt.

Granted, it can also be said that it is in a woman’s best interest to scope out and screen any potential breeding partners so that only the gainfully employed and nominally vertical and breathing get through, but it doesn’t always work out that way.  Sometimes decent women for whatever reason end up procreating with the scum of the earth.  It happens, especially for those naive enough to “listen to the heart” instead of being like my oldest sister and examining the dude’s bank statement and earning potential before getting emotionally involved.  Then again some of us can pick and choose while others of us don’t have that kind of luxury.  Hindsight being what it is I should have simply gone to the “lives alone with cats (and dogs)” step, but life is to be lived and learned.  The difference between ignorance and stupidity is in learning from one’s mistakes.

I have confidence that Steve-o will be more than just a sperm donor.  He better be.  Or I will kick his ass.

I said I was going to put it up and I did.  What a delightully tacky pink tree, complete with all the Hello Kitty ornaments and so forth that I could scrounge. I know Jerry hates it but (unlike his normal whiny self) he’s not really making a point to protest, even though it is in the picture window where God and everyone can see it lit up from the road.   I have been so unfailingly, maddeningly busy that it’s been an effort to keep up just on survival things like eating, bathing and personal landscaping.  I am surprised I did this much decorating.  It’s sad because I enjoy Christmas for the most part, and this year I am not dead broke like I normally am this time of year.  The trade off is that I don’t have time to do anything extra, so whoever doesn’t enjoy their check and bag of little goodies can go blow.

I think the most frustrating part of the holidays is dealing with crowds.  I detest shopping and traipsing about amongst the unwashed hordes anyway, but from about Halloween to January 15th or so, it’s like perennial Welfare Day at the grocery in every store you have to go in.

Then the stores compound the problem by having limited time specials.  The Kroger Marketplace ran an interesting special where you got points to buy non-grocery merchandise based on your spending, which was cool, except that the entire Central Ohio area had exactly three days to redeem their points.  Those three days (Dec. 1,2,3) would normally have been “avoid the grocery at all costs” for someone like me already, because the 1st being a Friday AND Welfare Day means the place is going to be a farking zoo.   But my greed got the best of me- since they owed me $90 worth of non-grocery merchandise and I wasn’t going to pass that up- and I ended up getting folded, spindled and mutilated all the way through the Kroger store to get a vacuum cleaner.  Granted, it was a free vacuum cleaner, and the way I burn through them because of the dogs, I wasn’t going to pass up the opportunity despite my claustrophobia and borderline agoraphobia.   I just don’t understand why on God’s green earth that a store would run a limited time promotion on days when they are already going to be insanely busy to begin with.  Why not do something like that at the end of February when nobody wants to go anywhere or do anything and the stores are pretty much desolate?

If it were up to me Christmas would be in August.  Nothing else happens in August other than it’s bloody hot, but there’s a lot more daylight available for all that traipsing about in the stores.  I don’t like wandering through miles of parking lots at night trying to seek out my car.  It’s dark and there is usually at least one form of precipitation going on too which makes the whole process all the more miserable.

I am delighted that relatives generally don’t come to stay with us.  Jerry alone is like cleaning up after a horde of hogs.   Being invaded by house guests at this point in my life would drive me positively apeshit.  I don’t mind going to other people’s houses for holiday functions, etc. because I can leave when I’ve had enough.  It’s harder to throw people out when you’ve had enough of them, and truth be told most people wear on my patience very quickly.   The good thing is, not too many people want to stay in a house with three large dogs, especially when two of the dogs only like a very select few people.  Sheena pretty much likes anyone with a pulse who will pay attention to her, including kids.  Clara’s approved list is pretty short.  Lilo’s is even shorter.  All the dogs love Steve-o and Hannah, and Bob and Debbie, but beyond that, there aren’t many people who can come in the house unsupervised.  I like it that way.

It sounds pathetic to most, but I would genuinely enjoy a few silent sanity days to myself.  If I could do the ivory tower get away for awhile I would- three or four days of silence and contemplation would be a dream, but it’s probably not happening anytime soon.  I’ve not even had a chance to start on the Stephen King novel I’ve had for a month now.

Jerry has taken it on himself to get into the zombie movie genre.  I’ve always enjoyed the classic ’80’s slashers but the only zombie movie I really got into was Shaun of the Dead.    Go figure, as it’s British humor.  I get to see enough real life zombies every time I have to fight my way through the grocery store at the beginning of the month.

Go zombies.  I saw this one in the grocery store parking lot on an old Crown Vic: 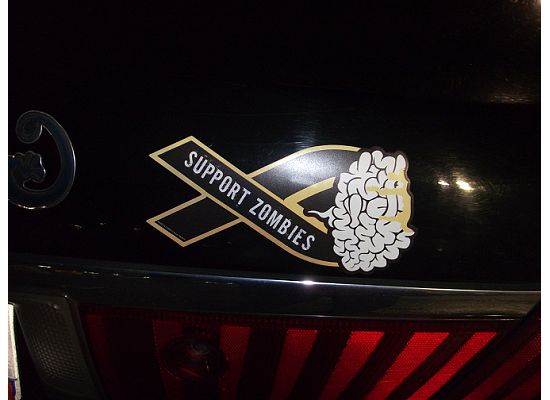