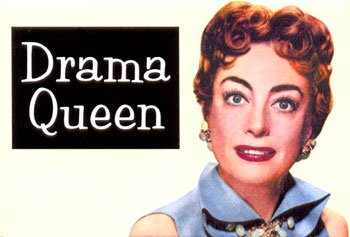 I find it hard to believe all the stories I hear about celebrities and their horrible childhoods.  I don’t see where it could be possible that every celebrity with some bizarre addiction or other weird behavior is that way because their mother was Joan Crawford.  I don’t see why rich people would bother with tormenting their kids when they can use their resources to shield their offspring from some of the nastiness of life.  Poor kids have the shittiest childhoods, believe that.   I got to experience everything from daily beatings (both from the sadistic oldest sister and the kids at school) to midnight toilet cleaning rages with Mom.   I’m not going to say I turned out anywhere remotely normal, but I am somewhat functional.  Perhaps the real reason why there are so many silver-spooned whiners is that they were handed too much.  Mommy was too damned nice.  Celebrity Mommies don’t  generally make their offspring scrub the piss stains off the base of the toilet with an old toothbrush at 1AM. Suffering, while not fun, builds endurance and character.  If it doesn’t kill you first, that is.

I knew that they couldn’t afford me getting sick, and as a child I was sick a lot, so to avoid the inevitable parental arguments over not being able to afford my medical care, I never told them when I was sick.  Unless I was so deathly ill I couldn’t function, I feigned wellness until either I could no longer remain vertical, or I got better on my own.  I didn’t know (at age 10) that one gets rheumatic fever by getting strep throat and not doing anything about it.  I figured the more stuff I could tough out the less money they would have to pay out.  That’s how I ended up with blood poisoning (twice) and pneumonia (several times.)  You can’t win for losing.

If frogs had wings, they wouldn’t fall on their asses when they land.  I can’t change the past.

I don’t have much sympathy for someone who claims to be warped for life because Mom bought him an Audi for his 16th birthday instead of the Porsche he wanted.  Considering the place and time in which I grew up, I was damned lucky to have survived at all.

Oddly enough, when considering the demographics of the geographical location where I grew up, my family was affluent compared to most.  Unlike most families surrounding us, Dad was able to earn an income in the five figures.  My sisters and I were some of the few kids at school that didn’t always eat lunch- because we were three out of four kids in the entire school who didn’t qualify for the free lunch.  If Dad didn’t have any money to give you, then it was pack your own lunch (have fun with that one, especially at the first of the month, when it’s a toss up between the mortgage and utilities or buying food) or just don’t eat.  Admittedly I took option 2 most of the time, even if Dad did give me money.  School food was nasty.

Today there is all kind of outcry against bullying.  Back in the day, I just assumed it was a normal part of life.  My oldest sister tried to suffocate me with a pillow as soon as my parents brought me home from the hospital.  Her cruelty went on pretty much non-stop for the next 17 years.  It stopped abruptly after she had taken my car without permission. When she came back, I saw red, and I took out 17 years of repressed aggression out on her in the front yard.  Dad had to peel me off of her, or I’d probably still be kicking her in the face.  She ended up having to get stitches in her mouth.  Had this occurred today I’d probably been thrown in jail for assault or even domestic violence.  Since it occurred in 1986, Dad stood on the porch and silently enjoyed the show until he thought she’d had enough.  When he saw blood he decided it was time to pry me off of her.   Even he admitted that it was payback she richly deserved.

I am not by any means a good fighter.  Given my poor coordination, physical fragility and weakness, I try to avoid physical confrontation at all costs, but at that moment my overwhelming rage overrode any restraint I thought I had.   She got 17 years’ worth of payback in about 5 minutes.  I felt sort of bad about it, and was extremely physically sore for about the next month, but I did learn something.  Anyone, no matter how harmless they might appear, is capable of Major Shit if they are provoked enough.  I try not to let myself get into situations in which I would be compelled to pound on anyone like that ever again.  Today that would land me in jail, which is a bad place for a straight woman with a number of medical issues.

I can remember some good things about childhood too- like party stores, where you could go and buy penny candy and Lik-m-Aid, which is really nothing but pure sugar that is lapped up with a solid sugar stick.   Nobody had even heard of anything as ridiculous as a car seat.  Most of the time you would see kids jumping around in the back seats of behemoth cars such as Mom’s friend’s ’69 Cutlass Supreme, or the ’75 Ford LTD Country Squire Wagon.  These old land yachts, with their highly inefficient carburetors, idled rough and always smelled of partially burnt gasoline and butt-funk from people sticking to the hot vinyl seats.  I don’t miss those hot, hot, hot vinyl seats or the scorching hot metal seat belt hardware in those old cars.  None of them had A/C either, so in high summer you would inevitably stick to the seat, and the smell was ghastly, but they still had a sort of odd charm.