Woof.  I don’t see any bridesmaids though, which means this chick either a. Didn’t have any female friends, or b. Was kind enough to her female friends to refrain from asking them to be bridesmaids.

The cruelest thing that one woman can do to another (and believe me, we bitches can be sadistic) is to ask a “friend” or unfortunate relative to be a bridesmaid at her wedding.  There are many reasons for this.

Traditionally the bridesmaids have to pay for their own dresses.  Now if I had the audacity to ask someone to be in my wedding, I really can’t justify requiring her to buy something that she probably can’t afford and probably will never wear again.   Considering what some bridezillas expect their “friends” or unfortunate female relatives to wear, just having to wear it one time is punishment enough without the pain of actually having to buy it. 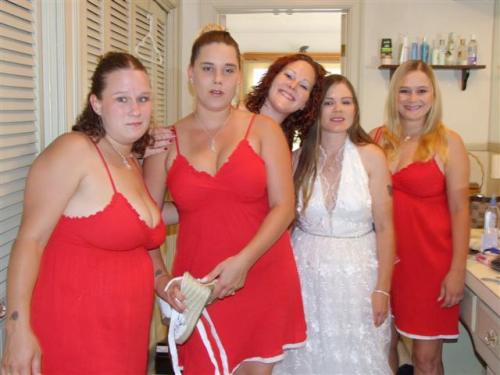 Give me a break.  One would think you wouldn’t want your wedding pictures marred by Big Fat Bertha’s meaty arms and that overall overstuffed sausage casing look that large women lend to slinky no-sleeve dresses.  It’s no crime to be large, but if you want large girls in your wedding, please find dresses that will flatter ALL your bridesmaids’ figures.  Dresses with sleeves!!! Dresses that will restrain the “puppies” at least enough so that they don’t fly out the top of the dress every time the wearer bends over!

I like pink.  I really do, including hot pink.  However, this dress is only suitable if you are four years old and playing with Barbie dolls.  It will only fit properly on those with the proportions of a Barbie doll too, so please remember, Big Fat Bertha is going to look like a tarred and feathered giant pink whale in this monstrosity. 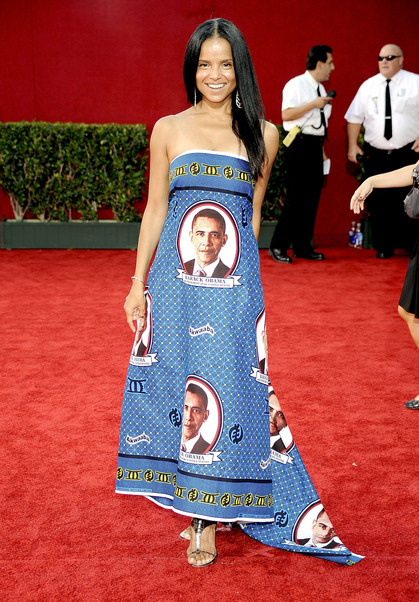 This is the absolute WORST dress on the planet for many reasons. I didn’t think in all my trolling that I could find a dress this bad, but I did.  I don’t think I’d like it even if the President pictured on it were to be the late, esteemed Ronald Reagan.  I particularly abhor sleeveless dresses of any kind because they are only flattering to the Calista Flockhart set.  Women like me who are all upper body and are proportioned like mutant trolls look really horrible in sleeveless dresses of any sort.   They bring attention to our meaty arms and ample chests.   However, the worst thing about this dress is the most obvious.  Anyone who would even think for one minute that I would wear, much less buy, a dress with Obama’s picture on it, can shove it where the sun don’t shine.  ACCK!

Thankfully I am old enough now that it is highly unlikely anyone would want me to be one of their bridesmaids (given that most of my female friends and acquaintances are either married or happily divorced already) and I would have to vehemently (though politely) refuse due to poverty anyway.  The last time I was strongarmed into doing the bridesmaid thing was when my oldest sister got married, and that was only because Dad wanted her to shut up.  That cost me $300 for a dress I never wore again, and $800 in car repairs from damage inflicted to my suspension on the road trips to and from the lovely Detroit area.  I don’t think there are shittier freeways than in the Detroit area anywhere. Never again.  My sister got her last sadistic laugh on that one.  I don’t understand why she just didn’t substitute a far prettier, more affluent and more photogenic friend.  That was pretty stupid on her part, but I think she got a certain satisfaction just in getting her way, and in the delicious knowledge that it was a major hardship for me to play her game.  When she got married I was in the process of arranging my divorce and needed every dime I could save to get away from my ex.

There is, however, no arguing with a bridezilla.  My pleas of poverty and desperation fell upon deaf ears.  I expected my Dad to defend me, but even he couldn’t stand up to her incessant whining about it, so I got roped in and acquiesed to keep the peace with my Dad.  I will NEVER allow anyone to do something like that to me again.  It would have been different if I could have afforded it and/or my situation in life would have been different, but it’s pretty damned cruel to expect a woman in an abusive marriage who is trying to get out and get a divorce, to take her freedom fund and blow money to be in someone else’s wedding.  It may have been a happy occasion for her, but to me it was just another pointed reminder of what a dismal failure my life up to that point was.  I know I should forgive and forget, and I do try, but the sheer insensitivity and cruelty of  it made me feel like a bad puppy getting her nose rubbed in shit.  Having to pay for that fugly dress was hard enough, but having to deal with all the car repairs on top of it really added insult to injury.

Then again, asking someone who is on the brink of divorce to be in your wedding is pretty damned callous to begin with, and I don’t care who you think you are.

The things that bridezillas will do.

I can’t see the logic in the big behemoth weddings anyway.  I see it as a huge waste of money and time.  I am grateful for one thing about Jerry and my wedding- we simply went to the courthouse, paid the county their $50 fee and got married by the justice of the peace du jour who was a Methodist pastor filling in for one of the judges.  No special clothes, no extensive travel, no fanfare, and it was just fine by me.  Of course we did not make any mention of it until after the deed was done so my mother couldn’t barge in and turn a wedding into an all-you-can-eat free for all for all her friends, most of whom I don’t know from Adam’s housecat.  Jerry does have his good points, and in this his frugality was a huge advantage.

Admittedly most women are not as minimalist as I am, and most women have more female friends than I do.  Even so, expecting one’s “friends” and female relatives to put up huge outlays of cash just so they can be there for you on your “big day” is a bit much.  It’s different if they are invited and can decline gracefully if circumstances don’t allow them to participate. 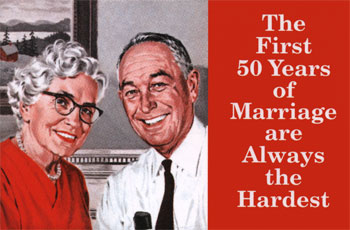 I think people should remember that marriage isn’t all that it’s cracked up to be.  There’s no such thing as a knight in shining armor or a woman who is perpetually a celestial vision, even if you plow through thousands of dollars to maintain that illusion for one day.  I say you might as well jump into reality.  Prince Charming he ain’t, she’s no prize either, so you either want to deal with that or not.  Romance is dead, and there is no such thing as true love.  If you can get by from day to day without throttling the son of a bitch, you’re doing good.

Of course it is always possible to simply live alone with the dogs.

2 thoughts on “Woman to Woman Cruelty and Other Wedding Insanity”