I should always remember to have my camera ready whilst driving down Morse Rd.  I find the most hilarious and out of place things. For those unfamiliar with the term “trucker bomb,” Urban Dictionary defines it as:

Trucker Bomb (n):
A plastic container that a truck driver pisses into inside the cab of his truck during daylight hours to be later pitched out usually on the side of the road. This practice has come about by the increasingly strict laws about indecent exposure. Years ago if a truck driver got caught pissing on the side of the road by the Po Po, he was given a ticket, end of story. But now if convicted of indecent exposure, you must register as a sexual predator where you live. Much safer to piss in a wide mouth bottle and a whole lot legally less complicated.
Billy Bob Big Rigger builds a trucker bomb every day on his run though Ohio. After dark when the bottle is full, out the window it goes to be later detonated by the poor dick that has to mow the shoulder.
Given that most truckers dispose of these while driving along on the Interstate (though I do also see them deposited regularly along the exit ramp from Northbound I-270 to Morse Rd.,) it was odd to see one at the intersection of Morse and Sunbury Rd.s, just catty corner from the UDF/Mobil aka: the Armed Robber’s Late Night Wet Dream.
I also found it a bit odd that in lieu of the typical 2 liter Mt. Dew bottle it was a Sobe bottle.  Either it was a New Age trucker, or perhaps a young punk out partying who just couldn’t wait to make it to the UDF crapper.
I have to envy dudes on this point.  If they absolutely can’t make it to the nearest comfort station, it is relatively easy for them to take a tinkle in an empty plastic bottle.  This does NOT happen for chicks.  I find it exceedingly difficult to cop a squat out in the woods (usually because you end up pissing all over your pants) and most likely impossible to go in a drinky cup or anything else that isn’t a toilet. If a woman has to make time on a road trip, I think Depends might be the only way to bypass the gas station toilet without making an unholy mess.
This morning (yes, Memorial Day) when I would normally be visiting my grandfather’s grave (he was a WWII Veteran)  and then taking a trip to whatever party or BBQ was going on, I was actually at work getting the month-end stuff finished.  While it did bother me that I wasn’t able to make that road trip today,  I don’t mind too much because a.) I’m getting paid for it, b.) I was done relatively early, and c.) I have tomorrow off when everyone else has to be at work.  I don’t mind working alone.  In many ways I prefer it because I get more done when nobody is pestering me. Even when I am duly compensated (and especially when I am duly compensated!) I have to be careful of getting caught in the cycle of overwork.  Working into oblivion can become an addiction for me.   It’s too easy for me to get lost in the task at hand and forget things like eating, sleeping, maintaining contact with family and friends, etc. and so on.
Even for the last two weeks that I’ve been more or less living at work, I have had some time for guilty pleasures.  I am a huge Journey fan from way, way back, and I have currently been enjoying their latest release, Eclipse.  Working alone is especially nice for cranking up tunes on the MP3 player while I work -it might seem like multitasking in a weird kind of way, but I get more done when I am listening to good music. 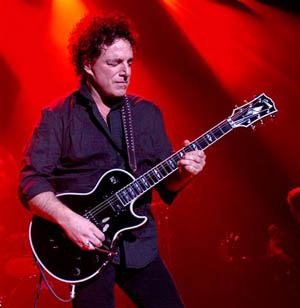 As much as I rave about Steve Perry in Spandex, that was then, and this is now.  I can’t go back to 1981, but I can appreciate something new if it’s good.  Eclipse is good, strikingly good, and that’s saying a lot from someone who really hasn’t kept in touch with the music scene since about 1985.  One of the things I like about Eclipse is that Neal Schon pretty much had his way and this is a beautiful thing.  Neal is probably one of the best, if not the best living rock guitarist today, and getting new stuff from him (even better yet, as part of Journey) is awesome. It warms my soul to know that not every new song coming out is boy-band tripe, cop-killer-sister-raping rap, or sappy-yucky songs about girls kissing on girls.
Arnel Pineda is not Steve Perry.  That’s OK.  Arnel has a great voice and a lot of fire and can stand on his own merit.  He has an extremely wide range that he uses well- which I enjoy (this is challenging vocal material- take it from a student of voice!)  I like listening to him.

Tomorrow’s adventure is getting the Cougar Pool up and running.  I have it, but now I have to figure out how to get it to stay up and hold the water in.

One thought on “Trucker Bombs, Overwork and Music Reviews”