Suffice to say I’m not in a terribly great mood today.  The pragmatic side of me says that Jerry was a bit overdue for a drunk-n-stupid episode- it’s been almost a week- so I should be happy with conveniently being out of town and missing the Monday Night drunk-n-stupid.  The only problem with that was I got the Wednesday Night make-up round complete with two of the three elements I hate about the drunk-n-stupids.  One, he started in about money, blissfully ignorant of how much I just plain pay out for his skank ass, and also blissfully ignorant that when you sell crap on E-Bay you have to pay a fee on it, and you have to pay to ship it.  Explaining anything involving money or expenses to him when he’s trashed is like nailing Jell-o to a tree.  I should have just nodded my head and agreed with him- because when he’s shitfaced (even more than when he’s sober) he thinks any crazy shit that pops up in his head is Gospel truth, but I was stupid and decided to set him straight on a few things.  Mistake.

Cigarettes.  Even back in the day when I smoked, I had the common courtesy to wait until AFTER the deed was done to light up.  Now that I haven’t smoked for years, just smelling cig smoke is enough to make me gag- without waving the damn thing in my face, ashing all over the place, and getting way too close to putting burn holes in my sheets and my skin.

Few people are more passionate about their hatred of smoking than ex-smokers.  Believe it.

Being shitfaced.  Natty Lite is not good for the breath.  Especially when you’re belching up used Natties in my face.  Waving the half-full beer can around in my bed, and possibly even spilling some of that embalming fluid swill in my bed sheets while doing so, does not earn any points for charm either.  Go back to your own hole and be shitfaced by yourself.

If you drink your dinner, do the world a favor- sleep alone.

Country music.  Country music has to be the #1 anaphrodisiac for me, save for extreme body odor.  Being that I am nothing to look at, and am proportioned like a mutant troll I can’t be terribly picky.  But start playing that awful song about saving a horse and riding a cowboy and you might as well understand that you’re not getting any action from me until you turn that torture off.

I may be poor and white and mostly self-educated, but my family tree does actually fork.

Needless to say, even though he hasn’t had a woody since Bill Clinton was president (and probably never will again), last night was not the time to try to resurrect the dead.  It was certainly not a good time to start in pawing and slobbering on me.

Normally his drunk-n-stupids are just part of life, but last night’s really got on my nerves.  Dad is in the intensive care up north awaiting bypass surgery on Monday.  I spent most of the day Tuesday with Mom while the Dr.s were trying to figure out what was going on with him and what to do.   Now that they know what’s going on and what they’re going to do, they’re pretty much just watching him and trying to get his sugar and sinus infection under control before then. I decided he can watch History Channel just fine in the meanwhile without me sitting around up there not getting anything done except exposing myself to exotic germs and various funky assed diseases- whilst sticking to the god-awful uncomfortable vinyl hospital chair.

Even so, I’m worn out and freaking out at the prospects of Dad having to have open heart surgery and all that, so I don’t need a ditzy assed drunk keeping me awake and being an obnoxious little titty baby.  Granted, I know that Jerry is both a ditzy assed drunk and a titty baby- he is truly helpless -which is aggravating as hell to me. 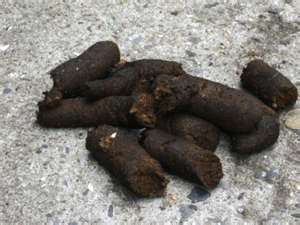 Shit: one of the most common elements in the universe.  Stupidity is the other.

This is a guy that if one of the dogs gets a case of the shits and unloads on the floor (fortunately the girls are trained, and this does not happen often) the first thing he will announce when I come in the door is, “Somebody shit on the floor and you need to clean it up!”

Oh, how many times I have wanted to rub his nose in it.  I don’t expect him to get the rug cleaner out, but at least make an attempt.  Scrape it into a bag or something.  It’s just shit.  As long as you don’t eat it, it shouldn’t kill you.

I know he was raised by wolves, but come on.

2 thoughts on “Everyone Has a Purpose, Apparently Mine Involves Graciously Accepting Others’ Shit”