I don’t have too many strange little pieces of kitsch lying around, but this is one of them.  I even know where it should have been at one time.

This is a ’69 Cougar.  The emblem, above, that I happened upon in some yard sale crap box, is the same as the one on the LF fender.

I never was a true believer in old Detroit iron.  I’m still a bit of a car snob- I love, but can’t afford and don’t want to deal with the high maintenance on the European stuff, so I am happy with a utilitarian Toyota that is easy to maintain, reliable and efficient and I leave it at that for now.  Unless I come into money and can buy that ’69 FJ40, the ’69 Karmann Ghia and the ’83 GTI I’d like to have to play with.

Even back in the ’80’s when all the other motorheads were into Camaros or Mustangs or (heaven forbid) anything Mopar, I was playing with VW Rabbits and air-cooled VW rail buggies.  However, if you are/were into old muscle cars, the ’69 and ’70 Mercury Cougars were somewhat rare, and are aesthetically very cool.  Mom actually had a ’70 Cougar, with a 351 Windsor no less- the one she sold way too cheap because my cat, LeRoy, decided to take a leak all over the back seat.  As part of the same eliminatory session, LeRoy also left a huge dump right on the driver’s seat.  That’s why you never leave the window down.  Leaving windows down on any unattended car in Ohio is a bad idea for a number of reasons.  First, it can get jacked that way.  Second, it can rain anytime, regardless of what the “forecast” indicates.  Third, outdoor cats may mistake your ride for an upholstered toilet.  No matter what she tried, the piss smell just wouldn’t come out.  LeRoy lived outside because he wasn’t neutered (I was only a little kid and couldn’t afford to get the poor cat’s nuts cut so he could live in the house) and now I know why neutering a tomcat is pretty important if you want him to live inside.  Male cat urine does not ever come out of upholstery.  “Little Trees” don’t help, either.  The dude who bought that old Cougar freely admitted to having no sense of smell. He smelled worse than the interior of the car to begin with, so I understand why he could have cared less. It was a good match.

LeRoy looked like Morris the 9Lives cat, but Dad hates cats, so LeRoy it was, since that’s Dad’s middle name.

LeRoy (in spite of having my Dad’s rather unfortunate middle name- Grandma sure had a sense of humor) was a really cool cat.  He was about Fanny sized- 16#-17#, and I could do anything with him, up to and including putting him in doll clothes and walking him around in a doll stroller.  He actually was a street cat, but he knew where the food was (I did bring him food) and he was one of those twisted big cats that liked little kids picking him up and playing with him.  Leave to me to attract the neighborhood misfits and strays.

Speaking of misfits and strays, we have discovered why Sheena is so difficult and seemingly incorrigible.  On top of all her other issues, Sheena is deaf.

No wonder she doesn’t listen.  She’s deaf as a post.

I don’t know why we didn’t figure it out before.  She follows the other dogs and will usually do what they do- but when there’s no other dog to watch and she can’t see a human, she’s lost. She does not respond to anyone if they’re behind her and she can’t see them. You can’t wake her from sleep unless you touch or shake her- sounds do not wake her up. I had thought she was just an incredibly sound sleeper, but that is not normal dog behavior.  A dog that can hear will be roused from sleep by a loud noise close by.  She is also much more intent on being able to see everything than a normal dog.  Jerry is having a dog trainer come out to evaluate her tonight to see if she might be able to learn sign language since she is so visually focused.  I have found some information that deaf dogs can learn commands in ASL, which would be a good learning experience for the other two dogs also.   In a way I feel bad because we simply thought she was mentally off, but for being deaf and having to navigate that way she compensates amazingly well.  Fortunately she already has some things working to her advantage.  She is able to follow the other dogs and work off their visual cues and body language, which is beneficial for a deaf dog, and in some instances (case in point) a deaf dog living with hearing dogs can cue in on their behavior and adapt so well that no one can tell they’re deaf.  Sheena has no fear of humans and she’s very trusting- probably because she knows that the humans have the food.  I am anxious to see what the trainer has to say when he works with her.

I took this pic whilst getting Jerry’s lottery tickets at the Speedway (gas station) last night.  Getting stoned in a Mom van.  Go figure.

I do find some funky things to photograph.  I wish there had been digital cameras back in the ’80’s.  Then again, maybe not.

The boy can sleep- and drool- anywhere. 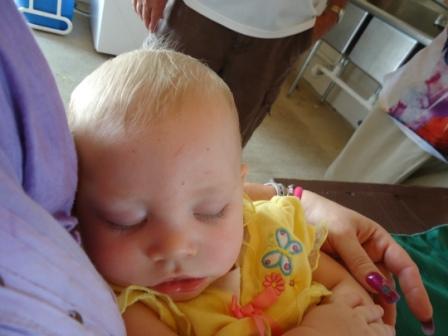 2 thoughts on “Suffer the Old Cougar, Sheena’s Special Needs, and the Things on My Memory Card”