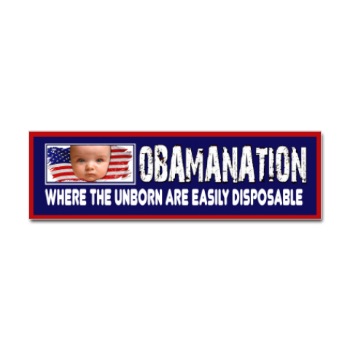 “Abortion is an atrocity that takes the lives of over 3,000 children every day. Abortion is an atrocity that wounds women and destroys relationships. To be in favor of such an atrocity is symptomatic of a certain moral view of life that has broader implications as well. What kind of morality do we want in our leaders who will be making decisions about human embryo research, genetic manipulation, cloning, assisted suicide, and euthanasia? The redeemed people of God are compelled to take action in favor of a morality that reflects God’s love for life as exemplified on the cross of His Son, Jesus Christ.”-

I have heard arguments of,  “Well, abortion isn’t the only issue,” in which Christians attempt to rationalize voting for candidates who advocate or at very least see no moral conflict with abortion on demand.   “But so-and-so supports a more fair tax system” one person may say, or “This guy has a better position on foreign policy and immigration.”  If “so-and-so” or “this guy” supports abortion rights no matter what their views on other topics, a Christian should be morally opposed to voting for them on those grounds alone.  Support of  “abortion rights” is the primary disqualifier- one who sanctions the slaughter of innocents is inherently unfit to hold any sort of public office.

The reason  Christians  cannot green light pro-abortion candidates is that we are given our rules for living in Scripture.  We are clearly instructed both in the Ten Commandments and in the teaching of Jesus,  “do not murder.”  There is no clear or definitive teaching in Scripture on tax codes or foreign policy or governmental social programs.  Our choice of  whether or not to support the police and fire levy, or to build a new library, or to cut taxes, are issues for which Christians can and will differ.  There is, however, no moral grey area  for Christians concerning life.  Scripture gives us clear and definitive teaching on the sanctity of life:

” Before you were formed in the womb, I knew you, I set you apart…”

“Your eyes saw my unformed body. All the days ordained for me were written in your book before one of them came to be.”

“As you do not know the path of the wind, or how the body is formed in a mother’s womb, so you cannot understand the work of God, the Maker of all things.”

The bottom line is, how can a Christian trust someone who has no regard for the most defenseless and fragile of God’s children?

“Abortion rights” has been the rallying call for so-called women’s advocacy groups.  “It’s my body,” they cry, but neglect to remember whose body it was when they consented to the conjugal act.  There is plenty of opportunity for choice before the act, and the biological reality is that women who are not ready for parenthood have more of a vested interest to prevent conception (either by abstinence or appropriate contraception) than do men.  A child does not magically appear in a woman’s uterus, and most women who engage in the conjugal act are aware that there is a risk of conception (even when using contraceptive methods.)  Either accept the risk, or abstain.

We embark upon a slippery slope when we try to arbitrarily determine “when does life begin?”  In less enlightened times “quickening” (when a mother can first feel her child’s movements, usually at or near 20 weeks’ gestation) was the standard because it was tangible evidence that there is something –someone- there, a separate organism from its mother.  Now that we can witness the very moment of fertilization- when the fertilized egg has its own unique set of chromosomes and becomes its own entity- who are we to say?  Since we have Biblical examples- of people who God created and set apart, set aside to God before their birth (Samson, Jeremiah, Samuel, John the Baptist and Jesus Himself) who are we to determine when that fertilized egg becomes human life?  Is life not God’s to give and take?  Is He not the Potter and we merely the clay?

Non-Christians insist, “Well, you’re trying to impose your religion upon us.”  While every Christian should strive to fulfill the Great Commission- to grow disciples for Christ- the fact is that people only come to saving faith by the Holy Spirit’s call and power.   Protecting life is a matter not of doctrine or dogma but of law- even non-believers will attest that certain things are right and certain things are wrong.  The aim in protecting life is not evangelization, per se but it is working for justice and upholding the law.  Christians are called to work for justice for all people, especially those who cannot speak for themselves.

Those who would support abortion rights start to apply a value scale to human life.  First abortion on demand is seen to be OK, then infanticide for less-than-perfect or ill infants, then well, guess what?  Grandma’s in the nursing home with Alzheimer’s, and she’s lost her cognitive ability, so she’s disposable too.  As Christians we are called to value all human life- to help mothers in difficult pregnancies to give birth to and provide for their children, whether it be through adoption or skills training and other support for mothers in distress.  We are also called to care for the infirm and elderly among us- especially when their cognitive or physical abilities decline.

Support of abortion rights is only one issue but it is a foundational issue. If you cannot trust a person to stand up for the most helpless and innocent among us, what can you trust them with?  Certainly NOT your vote!

One thought on “Election Time: The Primary Disqualifying Issue”