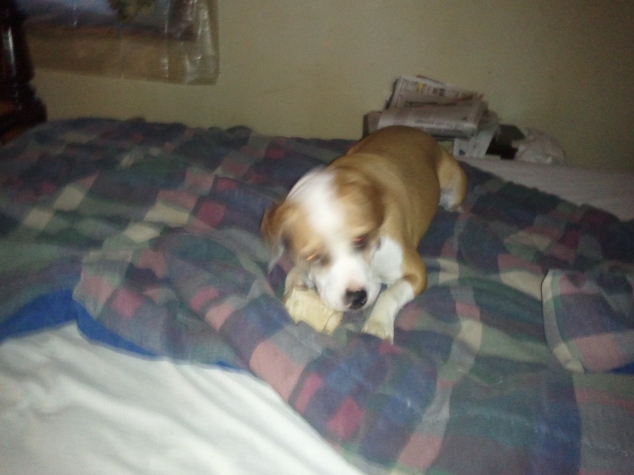 Let me explain the logic behind the cat hole. 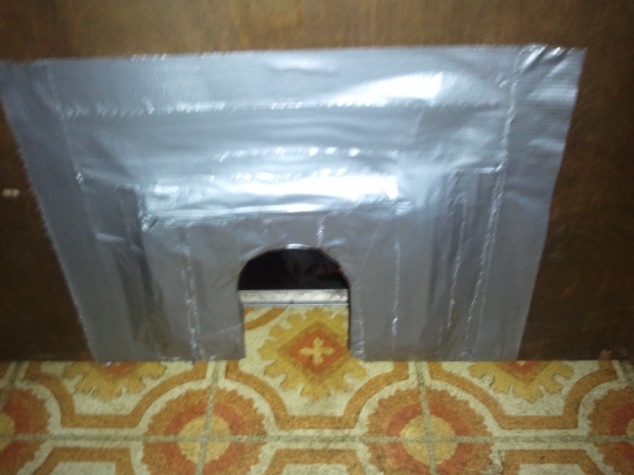 Dogs absolutely lust over cat food, and most dogs are inexplicably enamored of snacking on cat shit as well.  Neither cat food (too high in fat and protein for a dog’s metabolism) nor cat shit (well, it’s shit, ’nuff said) is healthy for dogs to consume in any kind of quantity.  It’s sort of like humans living on bacon and candy- it might taste good at the moment, but it’s just plain unhealthy, and such a diet can lead to serious disease. Dogs are not the best arbiters of healthy eating, and they really shouldn’t be left to free-forage.  As George Carlin once wisely pointed out regarding “gourmet” cat food, “How many gourmets lick their ass?”

Since we have four cats and three dogs, the cats need a safe place to hide when the dogs get on their nerves, as well as a safe place to eat and crap.  The dogs need to be kept out of cat food and kept out of cat shit.  In our house, the dog-free zone is the basement.  There’s a roughly cat-sized hole cut in the basement door that (in theory) keeps dogs out while letting cats move freely in and out. 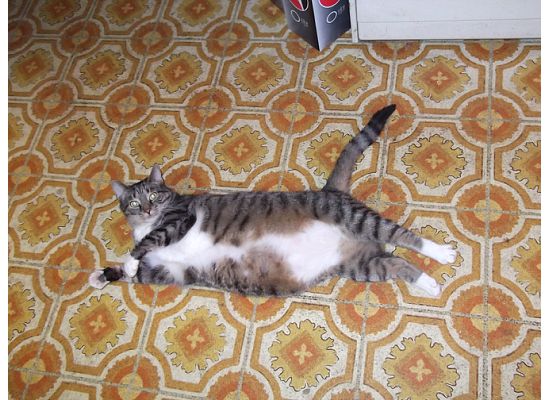 Big Fat Fanny- that’s what I get for naming the cat while listening to Queen.  The dreadful 70’s linoleum- not really my choice.

The original oversize cat hole worked just fine for Clara and Lilo, who have long since realized that they aren’t going to get to go downstairs to munch.  Clara is slender but even so, she’s still 65#.  Lilo is about 55#, and not terribly motivated to pursue anything that doesn’t afford her easy access.  Lucy, at a comparatively tiny 45#, however, decided to use her thick skull to worm her way through the cat hole.

The cat hole was a bit oversize because Fanny is a bit oversize.  Our cats range in size from 4 1/2# Jezebel to 17# Fanny.  Isabel is just slightly bigger than Jezebel at right around 5#, and F.B. is about 8#.    I have four cats and only one is “normal” sized.  Go figure, and I have no idea why the two black ones are so tiny.  Jezebel eats more than any of the other cats, but she’s still the smallest.  Her (Jezebel’s) feral relatives that live on the body shop lot are all petite cats as well.  Perhaps city cats have some sort of advantage in smaller size vs. farm cats who tend to be large like Fanny.  Isabel and Jezebel were both city ferals at one time.  Fanny was from out in farm country, and I have no idea where F.B. came from before we took her in when her first owner died.

As long as Fanny fits, and Lucy keeps from ramming it, the reduced size cat hole should keep cats and dogs in their proper places. 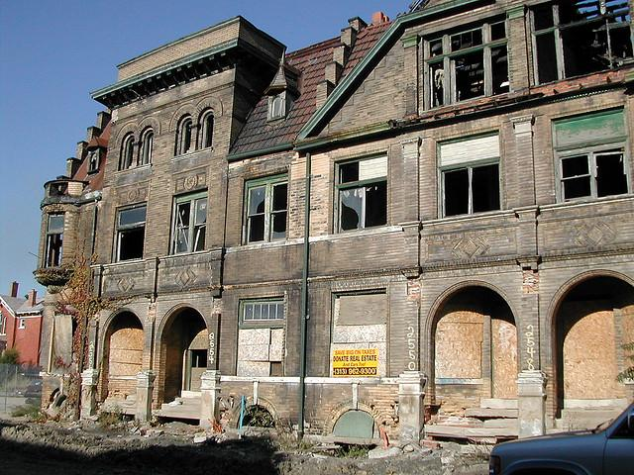 If Obama gets his way, the rest of the country will be just like Detroit.

I’ve tried to keep my mouth somewhat shut about the political rancor and just plain stupidity going on in Washington right now, but I can’t understand why there are still dimwits out there who don’t get it about Obama.  Including Jerry’s Dad, the former Klan member. 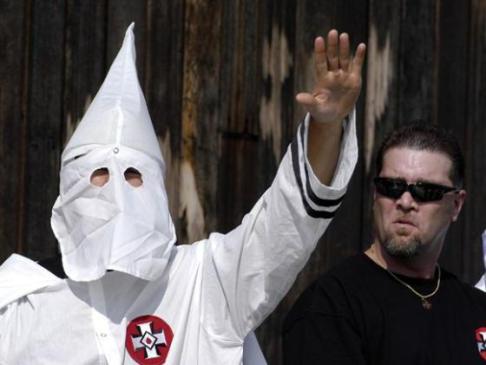 I can’t say I condone the Klan, but frankly I’m tired of any racial or ethnic group demanding preferential treatment.  The white supremacists are just as stupid as the Al Sharptons and Jesse Jacksons and Muslim extremist crazies of the world, believe that.  But Jerry’s Dad seems to have done a 180° to think Obama’s the best thing ever, and I really don’t understand why or how he would.  Maybe he’s gone senile and he’s feeling guilty for 70+ years of unabashed racism?  Or maybe he’s just batshit crazy.  I tend to believe suggestion #2. 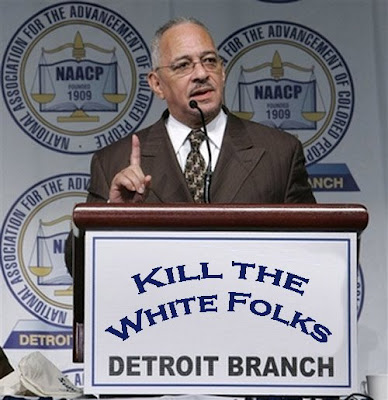 The thing is, I can feel bad over injustices committed against black people – or any other oppressed group-in the past without feeling a need to offer a free pass to Obama’s present ineptitude, incompetence and malice.  Equal opportunity includes the obligation to own up to your own epic failures.  If you can’t run with the big dogs, I don’t care what color, gender, ethnicity or whatever you are.  Stay the flying flip on the porch.

Instead of working together with others in government toward responsible leadership, Obama has established a thugocracy- a culture in which there is one central premise: that big government knows what’s good for you, and we’ll take what you have by force, ostensibly in the name of “the common good.”  In reality it is about big government feeding itself at the cost of those who work, produce and create.  Communism / socialism didn’t work in the (former) Soviet Union and it doesn’t work now.

I don’t know who came up with this summary but it’s pretty good:

Joy and rapture.  Welfare day at Walmart.  I think I’ll wait until the second week of the month to do my shopping. 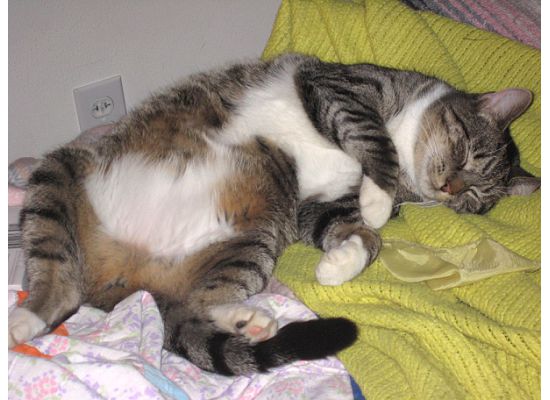 I love double entendre, but no, I’ve not managed to misplace my ass.  Yet.

Fanny, for the occasional reader, is my 15# silver tabby and white cat.  I named her whilst listening to a classic song by Queen: “Fat Bottomed Girls.”  Fanny was only a 12 week old kitten when I rescued her from the side of the road in rural Fairfield County, (way out in BFE)  and I didn’t think her to be terribly large at that time, but the name took on a life of its own as Fanny grew.  It seems rural barn cat type cats grow really well on premium cat food and relaxed, climate-controlled indoor living.  By the time she was old enough to be spayed, even the Vet commented, “This is going to be a BIG cat.”

One of the reasons I like our Vet is that she is very seldom wrong.  She was not at all wrong about Fanny being a behemoth.  I wish she were wrong about how difficult it is to treat Lilo’s (our crosseyed and bowlegged GSD/Chow mix) allergies.  Lilo absolutely hates the baths in the special shampoo, but it does help keep her skin from getting all nasty and crusty.  Seborrhea really sucks.  It is manageable with good diet and frequent baths (and occasional cycles of Prednisone) but I wouldn’t wish it on any poor dog.  Especially Lilo, because she is very sweet.

I’ve seen larger cats- somehow our Vet ends up with the same sturdy barn cat types like Fanny, and she’s had some males that have been over 20#, but female cats tend to be smaller than males.  Fanny is probably in the 90th percentile of cat size.  She is large-framed, but she does have some big meat on those big bones too.

One thing Fanny likes to do from time to time is to sneak out the door when the dogs go out.  Usually I catch her- she’s not a fast runner by any stretch- but if I don’t see her slip out I can’t catch her.  Thursday night I have to admit I was not at my most aware.  Between camping out at Children’s Hospital with the kids and a very sick baby girl, and trying to keep up with the end of the month rush at work, I was pretty strung out at 11PM.  I’d been up and running since 4AM.  I remember letting the dogs out.  Friday morning I realized Fanny must have sneaked out with them as she wasn’t readily available to suck down her morning portion of wet food.   Fanny does not normally miss out any sort of feeding opportunity, and has been known to shove dogs out of the way to get what she has coming.  Fanny backs down to no dog.

I was so preoccupied with my granddaughter that I really didn’t get too worked up about poor Fanny.  By the time the baby was released from the hospital Saturday I was an exhausted mess, and such a sorry sack of shit that I didn’t even go out to try to find Fanny.  I did make some excursions out back Sunday but was unsuccessful.  By yesterday (Monday) I was really getting frantic that she hadn’t appeared at the back door acting as if she were starving to death, so I made yet another foray into the back lot behind the fence under the junk truck and in the middle of the burr bushes.  Finally I heard a weak little mew (for a large cat Fanny has a very tiny voice) and saw her pointy little head peek out from under the truck.   She simply hunched down and let me scoop her up.  So I am delighted to get her back even though I was covered with those damned burrs.

I think I’m going to have to collar and microchip that cat even though she despises a collar. I don’t know where her head is at getting out- there’s no food, the ferals absolutely hate her, and they chase her off before she can even get to the food scraps we throw out for them.

Just a transient thought- I hate pompous assholes who think they know it all and their shit doesn’t stink, but who go to great lengths to rub other people’s noses in their mistakes.  Never mind that the person who is getting ripped on is the one who actually does something other than fart off and run their mouth about sports and other stupid shit.  The only reason people like that don’t appear to screw up is because the only things they bother to do is showboat, nitpick those who are doing their jobs for them (because they’re either too lazy or  too stupid to do their own work) and bitch about what other people are doing and nosing about in their business.  These same people who seem to be first to make a mountain out of a molehill are always willing to let me do their work as well as my own while they fart off and get into some stupid assed discussion about sports or gambling or other stupid shit.  I really, really, really hate that- although I won’t mention any names.  I would like to engage in some passive-aggressive revenge, but even that’s not worth it.  Those sorts of people are just not worth the effort or the aggravation.

I know, I know, the best thing I can do is ignore such commentary, and usually I do.  I can take criticism a lot better from those who aren’t lazy snobs who are obsessed with sports, and who admit that from time to time they screw up too.  Dad always said if you never screw up it’s because you aren’t doing anything.  No shit.  Maybe it’s my own fault because I never got interested in sports, but I don’t have the attention span for such bullshit. It’s just too much of a waste of time.  I do really want to throttle the pompous asshole who I am being kind enough not to name….must…think…of…something….else.

On a brighter note, The Bob and Doug McKenzie version of the 12 Days of Christmas has got to be one of my favorite holiday themed songs.  And a beer in a tree indeed.   I love the visual: