It’s that time of year again. Most of my life I have approached the holidays with a combination of dread and loathing. From my earliest memory I still can feel the disappointment and fear that comes from being a child in tough economic times – money, or more rightly the lack thereof- was guaranteed to get Mom and Dad at each other’s throats.

Christmas time was always a really turbulent time of the year. Dad, especially, always wanted to do the large and lavish holiday things but the money wasn’t there. So he would get bitter and depressed. If only he would have known that a quiet and frugal observance of the Incarnation and birth of Christ with sharing and love would have been so much better than just another series of money fights.

It was better to put up simple decorations and lights and to make homemade candy with Grandma than to dance around the tension at home.

I have gotten to the point where I can barely tolerate the retail bonanza that accompanies the holiday season. I love Advent and the religious observance of Christmas. I can even get into the decorations and baking, but no, I am not into buying tons of crap for people who (like me) do not need tons of crap.  Meaningful, needful and useful gifts are one thing, especially for someone you know is in need, but simply procuring a piece of vapid kitsch to wrap up so you can say you gave someone a gift is just not my thing.

Maybe that sounds sort of Scroogish but there’s no need to get me anything either. I do not need any bath sets, Walmart knockoffs of colognes that give me migraines, or socks and granny panties.  I don’t mind a good gag gift, a raunchy calendar or good theological books (that I would have to choose…)   The only things I really want are intangible anyway.

And off to the intangibles. I really want that one thing I have found to be so elusive- to be loved, to belong, to be accepted the way I am even though I wasn’t made for this world.

That’s a lot to ask, and maybe even wrong to ask, but who know 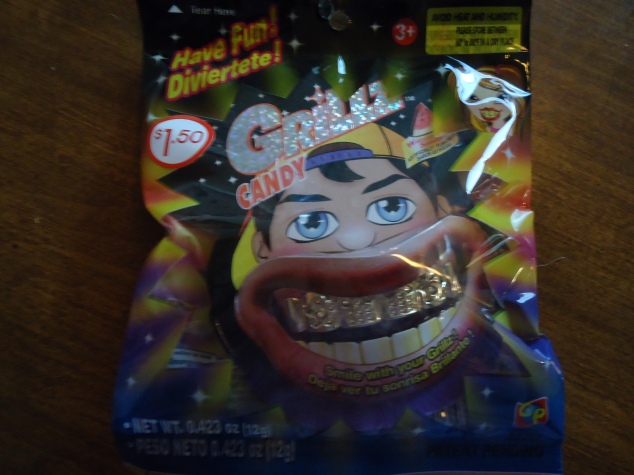 Wrong on Many Levels: “Grillz” Candy

Just when you thought candy cigarettes were beyond the pale, we get another frightening candy choice marketed to the unwashed masses.  What’s so terrible about “Grillz?” you implore?  Well here we go:

1. Appealing to “gangsta” culture, which is inherently inappropriate for children.  I can just imagine the kids playing “Let’s Make a Dope Deal.”  Why not just play “Hos and Johns and Pimps” too?

2. Undermining parents’ efforts at teaching dental hygiene.  Eat this candy-rot out your teeth-get yourself a gold grille.  That’s the message I’m getting here.  I’m sure the dentist would love this one.

3. Check out the chick with the downright yellow teeth on the wrapper, as if she’s proud of it or something: 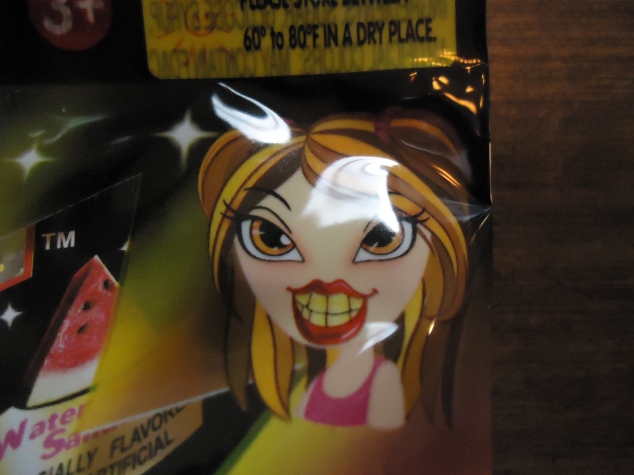 Now you could take it one step further and go directly from ghetto ho to trailer queen: 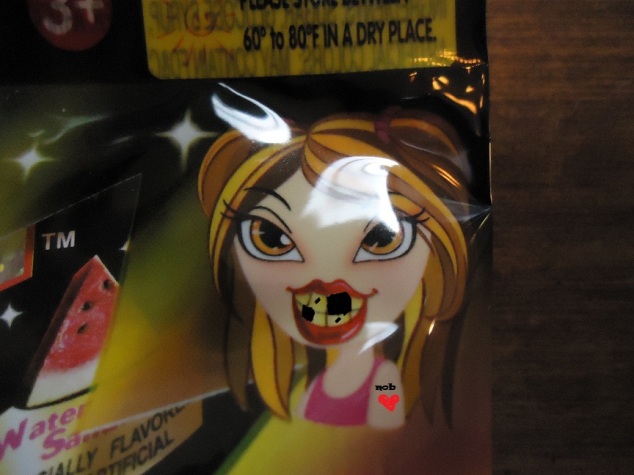 Still not a role model, even if she does look like your mama.

There’s a certain irony that I got this candy at the dollar store.  They are getting the demographic right- let’s just say the “Baby Einstein” crowd does not generally shop here, and “designer” children aren’t eating candy anyway.  While the One Percent’s offspring are eating organic fru-fru granola made with actual fruit, yogurt and grain, (have to say these days I’m right on that healthy eating train) here’s what the ghetto babies and neophyte rednecks are treated to.

I know my sisters and I munched a LOT of equally disturbing and unhealthy candy- candy cigarettes, Lik-M-Aid, Pixie Sticks, and other stuff that was just plain noxious on the sugar content alone.  The 70’s were the Glory Days of candy though- Tootsie Rolls, Hershey bars, the cinnamon gum shaped like hot dogs, Bottle Caps, root beer penny candy and so forth, but probably the closest things to socially objectionable candy were the candy cigarettes.

In the 70’s, smoking wasn’t considered socially objectionable.  You could tool right on in the supermarket burning one, and even hang out inside the hospital whilst enjoying a Marlboro Red.  The Dr. I went to as a small child smoked cigars in his office.   So nobody really thought the idea of candy cigarettes to be as abhorrent as people do today. 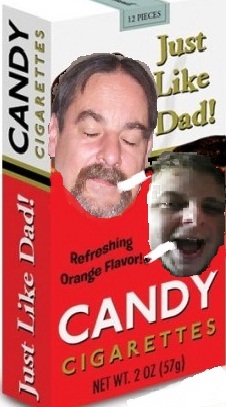 Just another motivational illustration on the “Steve-o, Stop Smoking Crusade.”

I hate smoking, but then the most militant anti-smokers of all are ex-smokers.  He’s turning those lovely crowns (I paid dearly for) a rather nasty shade of pasty yellow, and that sort of torques me.  Jerry, well, he’s incorrigible, but Steve-o is still young enough to ditch the cig monkey and get over it.  He already doesn’t smoke in his car (doesn’t want to ruin the smell of whatever fine leather upholstery the folks at Audi installed in his ride) and doesn’t smoke in the house.  Just take that next step and stop altogether already… but that’s probably my inner Joan Crawford going off again, except that Joan Crawford was a chain smoker.  Never mind that analogy.

Perhaps it was a bit ill advised of me to let Jerry eat Isabel’s food Saturday.  I let my penchant for passive-aggressive revenge get the best of me.  That stuff is $1.10 a can.  There’s cheaper things for Jerry to eat in that fridge. If he’d developed a taste for Miz Izz’s food it would cost me a fortune, when you figure that a can of tuna (intended for humans to eat) is only 70¢.

Over all I can’t complain about the illustrious offspring too much.  I think I might just get him that rebel flag decal he wants.

Some things never change.  You can’t necessarily take the redneck streak completely out.