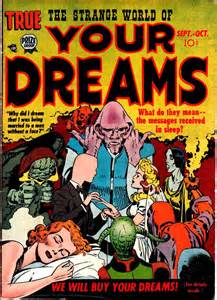 Maybe I’m going to have to give those subliminal mind-improvement MP3s a rest.  The next time I have a dream in which the showcased event is an old high school nemesis dancing on the dinner table at a swanky event sans trou and waving Mr. Willy in the wind, I might just have to think about staying awake at night.   The night before last was even weirder.  I find myself telling my mother that my sister can change her own diaper (as far as I know, she’s a tad bit scatterbrained, but not in adult diapers yet) and not to call it a “diaper,” but to call it “pants.” 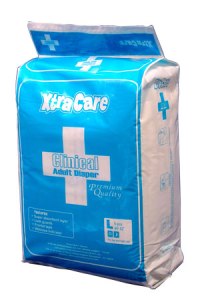 Note to self: 160-180# refers to the size of the wearer, not the amount of human effluvia it will hold.

Oh, yay.  Sigmund Freud would have an ever loving field day with me.  Then again, every mental health specialist I’ve ever seen has probably made some interesting notes.  Just don’t let my Prozac script run out and things should be OK. 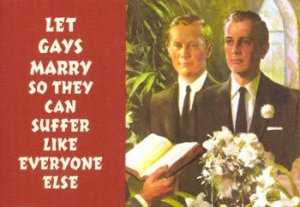 I’m not entirely surprised by today’s turn of current events.  I can’t say I support the concept of gay marriage, my primary reason (morality aside) being I don’t buy the argument that one’s “orientation” is something outside of one’s control, any more than any other aspect of one’s behavior is out of one’s control.  I also don’t buy into behavior or “orientation” being a civil rights issue.  The members of NAMBLA will tell you that their “orientation” is toward little boys, and that they can’t help their behavior because they didn’t “choose” their orientation, so does that make pedophilia OK? 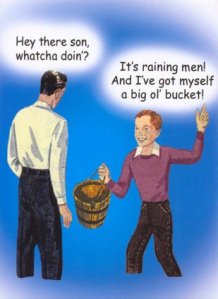 Using the “‘orientation’ absolves me from being accountable for my behavior” argument, I could rationalize that my “orientation” is to attempt to do the nasty with every fine young stud I see between the ages of 25 and 50. I can’t help it. That’s how I’m oriented. I didn’t choose it.   So to take that rationalization to its logical conclusion, my desire to be every hot young-to-moderately middle-aged dude’s naughty cougar fantasy should be celebrated, encouraged and subsidized.  I should be able to marry as many men as I like, so that when their willies don’t work anymore it doesn’t matter because I can just choose another stud from the stable.  Why can’t I engage in polyandry?   That’s how I’m oriented. I didn’t choose it.

See how dippy that sounds when straight people try to use the same argument to legitimize their own personal selfish choices?

If I choose to engage in promiscuous behavior, I could almost rationalize that because I’m married to a guy with ED- or if I choose to do the honorable, not so easy thing and live in involuntary celibacy because it’s the right thing to do, that choice is on me.  If I decided I wanted to get involved in intimate relationships with multiple men to make my life more tolerable and fun, the rest of society shouldn’t have to celebrate it, encourage it, or subsidize it, or even make it sound legitimate and healthy.

The whole idea behind marriage isn’t so much for personal happiness and all that fairy tale crap as it is a long term commitment between a man and a woman (ostensibly but not always for the purpose of begetting and raising children)- even when that commitment involves illness, non-functional equipment or dealing with a spouse who was raised by wolves.  It’s more like joining the army versus “forever after in happy land.”  You’re in it even when it sucks. 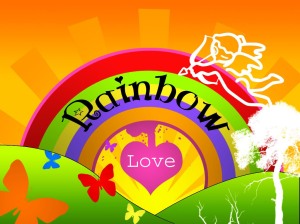 Even so, before one might consider me a gay-basher or a homophobe, I really don’t care what other people do in the dark- as long as I don’t have to pay for it, or watch it, and it doesn’t involve me.  Then again I’m not gay, so I admit it’s hard to see it from their point of view.  I generally don’t get along with women very well to begin with, with few exceptions (most of my friends are guys) and frankly there’s nothing any woman’s got that I want.   I’m straight, though I’ve been pretty much living without any kind of action for a number of years, so I guess in practical application, I would be a “none of the above.”  I guess love is where you find it, and at this point in my life that’s a dead horse regardless of my “orientation”- unless it involves battery powered devices.

Different strokes for different folks, and I’m cool with that.  I don’t care if a person has the hots for a Ford Escort as long as I don’t have to watch, and I don’t have to call it normal.   I don’t have a problem with what other people do or who they think they are for the most part, but I do have a big problem with trying to make behavior choices a civil rights issue. 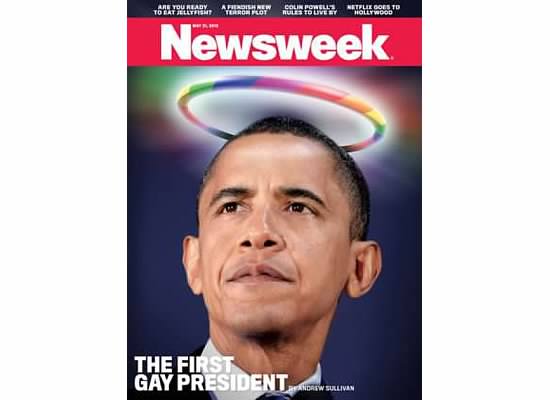 Ineptitude is Possible!  I love pragmatic slogans.  This one would be a good one for the Obama campaign, although in my opinion, framing Obama as being “inept” would be akin to saying, “Obama might be a socialist,” or, “Hitler sort of disliked Jewish people.”

“Incompetence and Apathy” would probably be a more accurate assessment of the Obama regime, though in all fairness, he’s been perfectly competent when it comes to obfuscating.*    Obfuscation is Obama’s number two skill, right behind deception, which is closely related.  I’ll give him credit: It’s easier to lie, cheat and otherwise deceive the American public once the smokescreen is in place.

*obfuscate: (verb) To confuse someone or to obscure the meaning of something. To make so confused or opaque as to be difficult to perceive or understand.

I know that I am very clearly politically biased, so yes, anything I say politically is almost always going to be at least a bit right-leaning.  I do find it a slight bit justifying that Bill Clinton (not exactly a paragon of economic conservatism, but he does tend a bit more to the center than BO and crew) has called Obama out on his economic policies.  The problem is, Obama isn’t going to listen to critique from the left anymore than he gives a rat’s ass about anyone on the right, or anyone who actually has to work for a living.  He’s going for the gay activists’ and (as a natural progression, Hollywood’s)bank roll, and setting up a nice, thick smokescreen for the rest of us at the same time.

In all honesty I don’t consider gay marriage to be a civil rights issue any more than it’s a civil right to do the nasty with your car like that dude on TLC.  Discriminating against someone because of their race is a civil rights issue, but failing to make provisions for those who indulge in unorthodox behavior is not.  Should furries get a special dispensation to dress up like Secret Squirrel at work?  What about their civil right to be whatever woodland creature their heart desires? 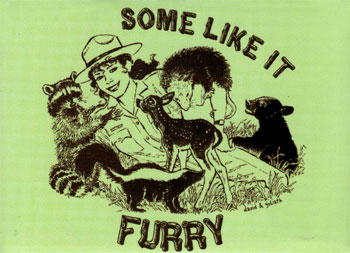 I don’t care what people do to get their jollies.  Generally if you’re not hurting someone else, then the government really shouldn’t mess with you, even if you are a nut job.  I would even go so far as to say there would be a lot less drug abuse (and a LOT less of the associated crime) if that crap were all legal and inexpensive to obtain.  The gene pool would necessarily chlorinate itself- the dealers would go out of business quickly as the junkies OD and die off. I find it sad that we have not learned a lesson from Prohibition.   No demand, no supply.  Make it easy to get and the illegal suppliers go out of business overnight.  Problem solved.

It sounds cruel to say that, but I can’t think of a better deterrent to drug abuse and the associated crime than to witness what it does to people.   However, I don’t think it’s imperative for society to sanction and encourage irrational and dangerous behavior.  There’s a difference between permitting something to occur and encouraging it.  If two people of the same gender want to live together and share all their business it is possible to do all those things on a legal basis.  What two consenting adults do behind closed doors is their business too- and I am including straight people in this assessment.  Many homosexual practices spread diseases, but straight people can spread diseases and such too.   Admittedly observing strictly monogamous partnerships (regardless of orientation) would be healthier over all for everyone.  However, in practical application, strict monogamy, especially among straight people-  is a lofty goal. 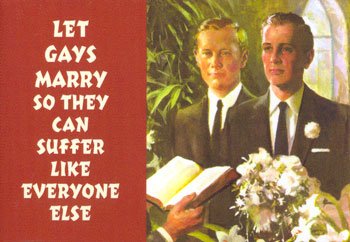 Be careful what you wish for.  It might really suck.

The benefit to society in the whole straight, monogamous marriage paradigm is that generally it’s better for children to be raised by two parents (one male, one female) and human reproduction still requires one male and one female to produce children in the first place.  I understand that there are geezers out there who are done with the whole breeding thing (me included) and there are people who for whatever reason do not wish to procreate.   Sometimes people of the same gender are attracted to each other even though that whole concept holds no charm for me.   Whatever floats your boat.   That’s fine.  Live together.  Do the horizontal mambo.  Share each other’s checking accounts and all that.  I don’t care.   But there is no benefit to the greater society in sanctioning or encouraging such relationships, and it is well to remember history.  Much of the reason for the downfall of both the Greek and Roman empires was the acceptance and popularity of homosexuality- the populations could not sustain themselves.

The bottom line is as far as individuals go, do what you’re going to do.  I have no problem with “special friends” having a legal agreement that protects the other partner should the other die, or to have power-of-attorney for each other, or shared properties, etc. as if they were relatives, but those provisions (at least in Ohio) are already in the law.  Leave it be.  And truth be told, if every fairy princess on the planet decided to marry his boyfriend- or his Ford Escort for that matter- it truly wouldn’t matter all that much to me if I could afford my scripts.

Now that Obama has become the belle of the drag queen ball, it becomes easier for the media and people in general to forget about his dismal economic policies, Obamacare, the millions of people who are already paying a LOT more for their healthcare because of Obamacare, and his stonewalling on domestic energy development.  These are the real issues.  There will always be gay people.  There will always be gay people who want the greater society to celebrate their particular fancy, and who have deep pockets with which to buy liberal politicians.  However, that issue pales in comparison to the energy and economic failures that BO doesn’t want to talk about.  Those are the issues that should be front and center, not whether or not gay people are going to live together and have relationships, which they are going to do whether the state sanctions them or not.

In all seriousness, I sincerely hope people think before they vote.  Obama is not qualified to run the toilet paper roll in a porto-john, let alone the Oval Office, and the past 3 1/2 years have proved it beyond a shadow of a doubt.  I am not an incredibly huge fan of Mitt Romney, but I’d take Bill Clinton again over Obama.  At least Bill Clinton was smart enough not to entirely rely upon the lunatic fringe.