There are days in which the melancholy threatens to take over and I’m afraid that if I start crying I might never stop.  It’s not necessarily a bad thing.  I think it’s really a sort of mental catharsis that happens when I’ve repressed too much stuff or there’s just a back log of unresolved emotional detritus that I need to try to address and resolve- or at least name.   Even though I navigate fairly well in the “world of normal,” I’ve got to love the Asperger’s/HFA/autistic disconnect between the feeling and thinking parts of my brain.  If I can’t name it, I can’t deal with it- but the rational side of my head doesn’t communicate well with the nameless, wordless emotional side.  Not at all.   Don’t ask me to be rational when emotional has control.  I lose whatever eloquence and reason I thought I had, as well as any words I thought I could use to express what I don’t think words can express.

In other words, I simply have to accept the disappointment and regret and that old favorite, guilt, that I live with, or somehow learn to get past all of that.  It’s easier said than done.

There’s always the fact that I have absolutely no courage.  It’s hard to say that but it’s absolutely true.  I loathe conflict.  That’s probably why I get taken advantage of so easily. Despite all the knowledge that feeding alligators only makes them bolder and hungrier, that’s exactly what I do.   I know I’m being exploited in many ways by just about every person I have dealings with, but I don’t speak out against it because I don’t know how to do it without the emotional side of my head butting in and making me forget the perfectly rational arguments I’ve prepared in self-defense.

I’m reduced to whatever it takes for you (meaning anyone who’s not me) to shut up and stop making demands of me…except that it’s never enough.

I’ll talk for hours about things automotive, things I find funny, the weather, politics, whatever- but don’t ask me how I feel.  Most of the time I really don’t know how I feel, and I don’t usually take the time to analyze my emotional state.  I enjoy good intellectual, rational conversation, but, I try not to feel- much less talk about the whole vexing realm of feelings.  It’s less painful that way.  The really bad thing about that is that I really need to do exactly that- some old fashioned venting- but I don’t really have anyone available to me that I can trust with that kind of stuff.  I don’t want to admit to such a depth of vulnerability.

There is a saying that denial is not just an old river in Egypt, but for me I think repression is a better term than denial.  I know I have tons of emotional garbage that have accumulated for decades, but I have absolutely no clue how to deal with it.  I know binge drinking and chronic overwork aren’t healthy ways to deal with it (gave up binge drinking years ago, the chronic overwork…eh, I still have issues with that at times…)

It just keeps piling up…

There are a lot of things I wish I weren’t too afraid to do.  It’s not so much about seeking revenge or retribution.  I have no desire to inflict the same aggravation I’ve endured on anyone else.  As angry as I can get, (and my primary emotions are fear and anger) even if I have the rare opportunity to get retribution, it’s usually hollowly unsatisfying.

I know I can wish in one hand and shit in the other and we all know which one will fill up first.

I don’t want to disappoint anyone or reject anyone.  I really just want to fade into the wall and leave as little of an imprint as I can- not offending anyone or intruding on anyone’s space. 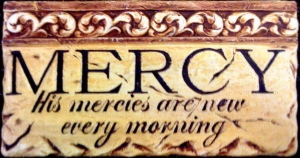 Kyrie elaison – God have mercy. God knows I need it.

Maybe the reason for my recent fascination with the life and times of General George S. Patton is that he represents the exact opposite of someone like me.  I think he had the ability to work through the emotional discord that has to result from the love of battle versus the love of life (or in at least some consideration for the self preservation instinct.)  I don’t have that courage or that love of conflict, but in some ways I wish I did.  I almost wish I could be more ruthless and staid instead of just putting forth a bland and unfeeling façade.  I wish I had passion, but any passion I might have had withered away and blew off years ago.  I’m not kidding when I say that living in the garden of memory is not only safer for me, but sometimes it’s the only place where I can really feel alive. 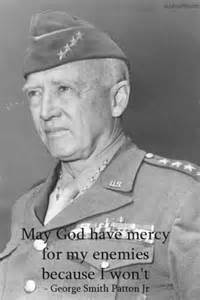 I wish I could be that ruthless, but in honesty, I can’t.

I have a love of historical non-fiction that I’ve not been able to indulge nearly as much as I would like to.  However, I just finished reading Bill O’Reilly’s Killing Patton: The Strange Death of World War II’s Most Audacious General, and have been intrigued by not only Patton the man, but also by the bureaucracy and dare I say it, ineptitude, that surrounded him.

Granted, Patton wasn’t a man known for diplomacy.  His famous address to the Third Army on the eve of D-Day  (according to today’s effete cultural standards) would have to be considered quite politically incorrect and would get at least an MA rating for the language he used.  All the more reason for me to really admire the man.

We need a man like General Patton today.  Someone (unlike me) who doesn’t have a 24-7 view of the lead dog’s hind end.  I can’t (for a moment) imply that I am the fearless voice of anything.  I’m doing good to not freak out just getting up and getting through my day.

I can only hope and pray that someone with conviction and guts and the audacity to stay on the truth track even if he’s the only one on the truth track will (somehow) land in a position of leadership.  The only problem with finding people of conviction is, that even in his day, Patton was seen as brash and over the top.  There are some who believe that his death in 1945 as a result of a car accident was actually an assassination, and that Patton was conveniently eliminated by the powers above him because he didn’t fit into the Allies’ post war plans.  It is well known that Patton didn’t trust the Soviets (a distrust that was well-founded) and he had a greater disdain for Communism than he did for the Nazis.   But history has proven him correct in many ways.  Perhaps if the right people had listened to what Patton had to say, much of the strife of the Cold War could have been avoided, and Stalin wouldn’t have gained so much power following World War II.

Another hard truth is that history is often told by the winners.

I have much admiration for Winston Churchill, but I always thought the Brits sort of got the short end of the stick.

What would have transpired in the post-war world had General Patton not met with such an unfortunate end?  Would he have been able to change the course of the latter half of the 20th century, even in some small way, and if so, would it have been better or worse? 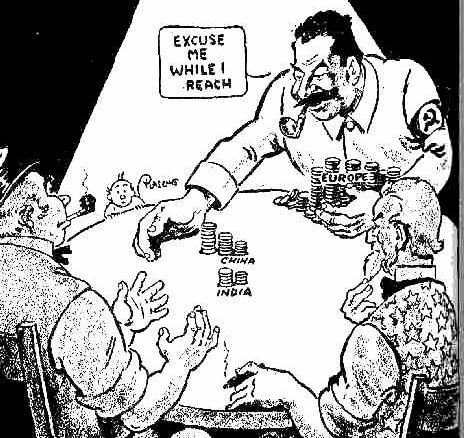 Would confronting Stalin  have led to a hot war with the Soviet Union that would have promised to have been as bloody and drawn out as the conquests of Germany and Japan?  Or would it have led to a very different post-war landscape in which Eastern Europe would not have suffered under Communist oppression for forty years?  Would the Brits have gotten a better deal when all was said and done?

What if (as some historians pose) FDR had passed before the fated Yalta Conference in which he conceded so much of post-war Europe to Stalin?  Would Truman have been a better negotiator in that place, given that he was in better health and was a sort of plain, no-nonsense kind of person?

I know that I can’t change the past, but I think it’s important to learn from it.   There’s way too much repeating the past and appeasing going on in this world (I need not mention the abomination that is the Obama administration, but I just did…) even though history has proven that feeding alligators only makes them bigger and hungrier.

Sometimes, as Patton said, (referring to the Germans and Japanese,)”The quickest way to get it (war) over with is to go get the bastards who started it. The quicker they are whipped, the quicker we can go home. The shortest way home is through Berlin and Tokyo.” 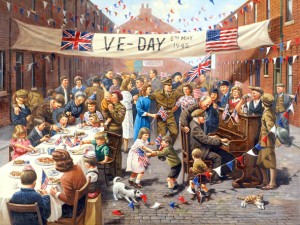 There is no negotiating with despots.  The only way out of a bad situation is through it.

Too bad no one seemed to listen to Patton when he said, “I believe in the old and sound rule that an ounce of sweat will save a gallon of blood.”

We know Obama won’t listen to the hard facts and the truth of history, and his pandering to the despots and terrorists and thugs of this world will cost how many gallons of blood?