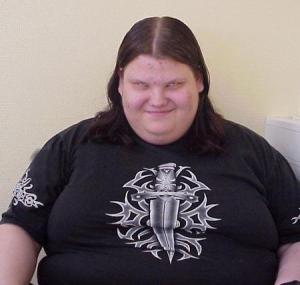 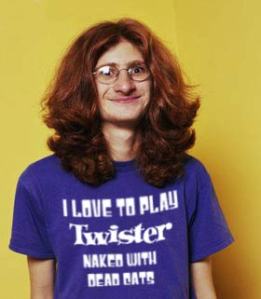 There’s something about observing the hordes of the unwashed that convinces me that the condition of the world is in a constant downward spiral.  I try to avoid shopping malls- especially when they’re crowded, but I broke one of my unwritten rules Saturday and accompanied the kids to Easton.  The original plan was for us to watch Alice in Wonderland in 3D IMAX at 4:15.  Unfortunately Jerry was watching the basketball game (like I give a shit about the Big Ten Tournament or whatever it was) and by the time we made it to Easton to buy tickets (should have bought them ahead online, shame on me for not thinking to check that) the 4:15 was sold out.  So we spent the afternoon cruising about the shops and fighting the crowds.  Jerry and Steve-o had fun at the sleep number bed place trying out the mattress and getting the sales pitch.  Arguably if I was considering buying a new high faluting bed, that’s what I would want.   At least an air mattress can’t get those funky body holes that regular beds get over time.  I still don’t know if I believe that the innards of these mattresses can stand up to dog nails.  Then again, it’s unlikely I will ever get to find out.

In spite of myself I actually did enjoy the movie.  Usually I don’t like the fantasy genre all that well and I am generally not one to go all out for “kids’ movies.”  In spite of being based on a story most consider to be a kids’ fairy tale, this version of Alice in Wonderland would likely scare the bejeezus out of most kids younger than teens.  I enjoyed the special effects.  There weren’t any dead spots either.  It was hard parting with the $14 a pop for tickets but this was definitely a good movie and worth seeing in 3D IMAX .  I would have been pissed, however, to pay $14 each for tickets to watch a shitty flick.   Sometimes things work out OK though.

I witnessed many fashion dos and dont’s on this happy foray.  One fashion don’t I observed with muted horror is that it is unwise to wear fluorescent pink if your torso is larger than my car.   It is also unwise to wear pants with chains when you’re wearing your pants halfway down your ass to begin with.   They tend to fall down as you walk.  However I did see some HK stuff in Hot Topic that I wouldn’t mind wearing.

It’s only March and far too early to be duped into thinking it’s springtime (especially here in Central Ohio) even though the time has changed.  We have had snowstorms in April here so I am not quite ready to break out the summer attire any time soon.  The difficult thing about March in Ohio is that it can be 70 degrees or 15 degrees…within the span of the same day.  There is no planning for the weather other than to take the Murphy’s Law approach- assume you are going to freeze part of the day and fry when you’re not freezing.

I wonder if anyone has actually played naked Twister- but then there are things better left unknown.

The only concession I would like to make to the wildly changing weather is I would like to get in a good road trip.  Alone, and preferably in out of the way rural areas where nobody goes.  I’d so like to take the camera and get some good pics of old architecture, monuments, funny redneck moments, etc.  Perhaps I should not mock the denizens of the trailer park (as I am not that far removed from them) but there are some things (like pizza and bait sold in the same fine establishment) that are too funny not to mock.