There are important differences to note between the British Royal Family and American rednecks.  I shouldn’t bad mouth British royals too harshly, as I may be distantly related to them, which is kind of a scary thought.  I did get somewhat lucky though.  Despite having a lot of English ancestry, (there’s a good number of Scots in my pedigree too) somehow, out of all my family, without extreme surgical intervention, I have nice teeth.   The rest of them have been cursed with varying degrees of defective and horribly malformed dentition, and they get it honestly.   So I should be tactful, at least.  While British royals and American rednecks share a (somewhat) common language, and a certain degree of inbreeding, the similarities stop there.

Usually, male British royals are fortunate enough to find women who are significantly smaller than feeder hogs.  The men are also significantly larger than Chihuahuas also, thus for the British royal couple as opposed to the American redneck couple, the sexual dimorphism  is exactly reversed.  British royal men are significantly larger than the women.   Unlike most mammals, redneck females tend to outsize their male counterparts by a ratio of three to one- as in a 300# woman will usually be found sporting a 100# man.  In some ways it’s kind of funny to watch.

I had a (female) friend in high school who was 6’2″ and 320#.  Her boyfriend was probably 5’6″ and 110# soaking wet.  Both of them were uglier than sin to boot. She looked sort of like Hulk Hogan in drag.  He looked like a very freckled version of Raggedy Andy, complete with unruly, bright red hair.   She definitely wore the pants in that relationship.  I remember going to visit her one day and as I was getting out of my car, to my surprise, I saw her scrawny little bird of a man flying through the screen door, head first.  Apparently he had drank the last of her beer and smoked the last of her smokes (and she was a three pack a day smoker- Marlboro Menthols, smoked one after the other, down to the filters.  I did the same thing-only with Marlboro Reds, back then.)  She had requested him to go to the drive-thru to replenish her beer and smokes supply.  He said, “no,”  so she took him by the collar and the belt loops and tossed him out the (closed) screen door, whilst informing him (in a not very polite manner) that he will go get beer and smokes, and he’d better hop to.

Thankfully the two of them never got married.  They shacked up for a couple of years, but he left when he found out that neither one of the twins were his.

Whenever the royals get married it is a Big Deal.  Since they are Britain’s answer to Hollywood, it sort of stands to reason.  Rednecks generally have little or no money and even when they do they spend it in horribly bad taste. This is why rednecks generally prefer to gawk at the Hollywood set.  It’s a lot more pleasant visual than looking in the mirror.   The royals, like Hollywood stars, have money, so it’s no big deal for them to put on a Big Show and to do it right, without a woman having to resort to buying her wedding gown on the discount rack at Wal Mart and putting the neighbor’s Shih-Tzu in a dress and making her the maid of honor because none of her friends can afford to be bridesmaids.  I’ve been railroaded into that mess– thanks to my sadistic oldest sister who doesn’t understand I’m poor- and I wouldn’t wish it on any woman, especially one who (like me) just happened to be going through a divorce at the time.  However, I’m sure that the bridesmaids in a royal wedding a.) don’t have to buy their own dresses, and b.) could easily afford it even if they did have to buy their own dresses.

Redneck weddings, while tacky, are a lot more fun than the formal gatherings (like my sister’s wedding with the high faluting reception, the $7000 wedding gown- thank God she paid for that monstrosity- and the $300 bridesmaid dresses we had to somehow pay for) of the more civilized.  Where else would it be “normal” for the bride to be at least in the late second trimester of pregnancy, a Twinkie be considered a reasonable facsimile for wedding cake, a Rebel flag a suitable decoration, and Wal Mart $3.00 shower shoes deemed to be acceptable footwear? 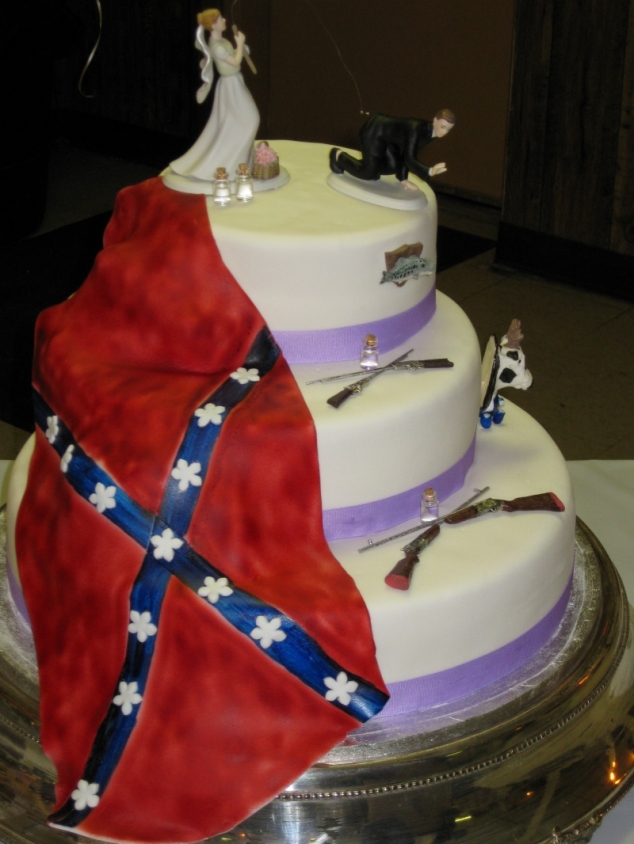 The rifles on the cake are a nice touch too.

I have to admit that I am probably the last person to seek for advice on  “How to Have a Happy Marriage.”   I could offer advice on “How to Abide a High Maintenance Spouse Without Throttling Him or Going Insane,” but this is an ongoing endeavor that I’m still working on.  Anyone who thinks the whole marriage thing is easy apparently is not married to a man with the mental and emotional maturity of a toddler.

I think it’s funny how much Americans get into the royal family business.   Perhaps it may go back to sharing a language, some common history, and for some people, common ancestry with the British.  It’s still funny to watch.

There is a certain irony that in the US, our inbred minions are generally confined to West Virginia and other remote parts of Appalachia.  In the UK, they’re royalty.

I probably won’t be watching the royal wedding tomorrow.  I stopped believing in fairy tales many years ago.

I am glad that at least for my second wedding (the advantage of not informing Mom) we dispensed with the formalities and just went to the court house.  It was a lot less traumatic and a lot less expensive, and did not involve railroading any friends or family members into buying clothing they will never wear again,  paying for road trips they can’t afford, or thrusting anyone into an awkward and painful emotional situation.

I simply don’t get the whole Bridezilla mentality, especially today when a good number of marriages either end in divorce or the couple ends up being glorified roommates.  I see the reality of one year, five years, ten years later, and I just can’t get into the celebratory mood.

At least funerals (while equally awkward and just as unpleasant to attend as a high brow wedding) have a finality to them.  Nobody really has to think too much about the deceased once the funeral is over.  They’re done with dealing with bullshit, and they’ve already made the decisions (for good or ill) that decide their place in eternity.  When you’re dead, you’re done.   Game over. Funerals are simply occasions to comfort the living.  Weddings are occasions to say to one’s self, “They have no idea what they’ve gotten themselves into,”  and to make a mental wager on how long the marriage will last.  The suffering has only just begun.

I got the snotty guy, but he didn’t come with any money.  Damn.