I love it when I get a good pic of a good bumper sticker – or even better- multiples.  It’s not always easy to get pics from in the car, and I usually won’t even try unless I have the camera handy and I’m stopped at a light.

This one was probably the best one I was ever able to get a good pic of: 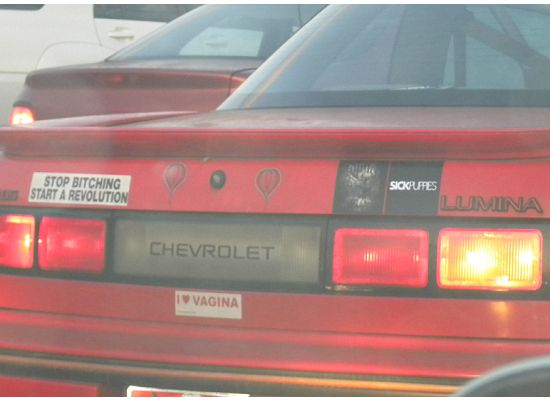 “Stop Bitching Start a Revolution” would have been good enough, but the I (heart) Vagina just sets off the whole mood of this young dude’s car.  I thought of Steve-o when I saw this, but I just can’t imagine Steve-o ever driving a distressed old Lumina.  I can’t imagine Steve-o driving anything domestic or automatic- but I can imagine him with either or both of these bumper stickers.  Had I seen these on either an old Accord or Integra then I really could believe it was his car.

This one is a good one too-

When I had my ’79 Subaru it was so covered in rust and primer that it became a game for me to try to put as many bumper stickers as humanly possible on it.  One came all the way from  St. Louis- KSHE 95, a rock/metal station whose mascot was a guitar playing pig.  I had a Journey sticker from the Frontiers tour, a Led Zep 4 sticker which was way cool, and a host of stickers with pithy sayings such as,  “I Liked Your Arrival, Let’s See Your Departure,”  “Zero to Sixty in Sixty Years” (very fitting for that poor Subaru with its 1.2 liter, carbureted, oil-leaking, high mileage engine) and “You’re Ugly and Your Mama Dresses You Funny.” That car was legendary, largely because it was so easy to spot, and because pieces fell off of it from time to time. Like the exhaust from the cat back for instance.  I had to wire that back up with coat hangers twice- once in the rain, which really sucked.  But at least I had a car.  None of my friends did.

Sadly I have no pics of that poor car to scan.  I wish I did, and if I ever find any I will be sure to scan and post them.

Today I think we hit the jackpot of annoying people.  Usually I try not to let people get on my nerves, because dealing with people when they’re being goofy is part of my job.  Today though, it seemed as if all the squirrels crawled out of the woodwork.

Yesterday I was in a rather vindictive mood.  I don’t know what happened to Old Thunder Thighs, but I don’t wish her any harm.  I do hope she has caught on to the cougar dress code by now.  Then again, she could make a killing at the nursing home.

It’s not just a truck, it’s a Dale Earnhardt Memorial Vehicle.  Never mind Dale’s been six feet under for the past ten years.  Let the Intimidator rest, OK?