Cooking, I don’t mind.  I am a good cook, thanks to both of my grandmothers (God rest their souls) and the fact that I did the cooking and cleaning at home from the time I was 12, when Mom had her bad back injury and couldn’t do much of anything for several months.  I sort of ended up responsible for meals and laundry and cleaning by default.  My sisters were pretty much always out either playing sports or socializing.  Since I was forbidden both by health issues and by abysmal coordination from participation in any type of organized sport, having a good excuse for getting out of the house was a lot more difficult for me.  I couldn’t actually live at the library even though I spent plenty of time there.

As an aside, I truly wonder if my heart valve damage would have been bad enough to make me drop dead from playing basketball like that poor kid in Michigan.  Is a “sports physical” for middle school or high school sports really anything more than simply checking to make sure you can breathe and have a pulse?  If that’s all that’s done, I probably could have passed a “sports physical” had I attempted it (not that I would!) because my valve defects are not always audible.   Even if I would have kept my mouth shut about having heart valve damage from rheumatic fever and went through gym class in spite of having the Doctor’s Note (oh, thank God for the Doctor’s Note that released me from that humiliation) would it really have made a difference?  I’d probably sat on the bench most if not all the time anyway.  I should have asked the cardiologist who did my echocardiogram back in 2001, just for my own personal curiosity.  I’ve been warned about getting my heart rate too high because I have an irregular heart beat and I’ll pass out- but I’m allowed to do all the swimming, walking and bike riding I want.  Unless I pass out, that is.

I didn’t do too much socializing either, other than avoiding getting my ass kicked, until I got a car.  Having a car- even one as distressed as that poor Subaru DL- afforded me both protection and people to party with, which was nice.   I am thankful for spending a good part of my teen years learning how to cook, fry, stew, bake, and make decent gravy. When it comes to acquiring Life Skills, nothing facilitates learning like being tossed in the trenches.  I know when I moved out Dad really missed those home-cooked meals.  Taco Bell just isn’t the same.

Cleaning is not one of my favorite things by a long shot.  There’s something about being awakened to way too many of Mom’s late night cleaning frenzies that has put me off of power scrubbing forever.  Especially because she is one of those types who worries about the crap you can’t see.  I am not going to lose sleep over dust bunnies under furniture, dog hair under the carpet, or that sort of thing.  I like clean laundry, a clean bathroom and kitchen and relatively clean floors, but I don’t have to Clorox the entire house every other day like she used to do.   I have a job and a life.  I also have dogs.  Large dogs.  Large dogs with hair.  The only time the dog hair issue really gets disgusting is in Spring and Fall when they blow their coats.  Sheena for some reason- probably due to the stress of her spay/partial mastectomy surgery- blew her coat in January, so I don’t anticipate her Spring blowout to be terribly severe.  Lilo is always an adventure because of her intense hatred for either bathing or brushing.  Thankfully she doesn’t have a really outrageously thick coat like Sheena does.  Clara’s seasonal coat blowings are barely even noticeable (gotta love that Malinois coat) and even if she were a heavy shedder, she adores being de-haired with the blade. 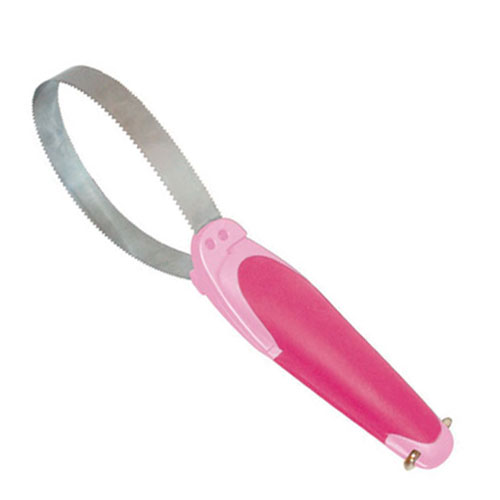 For those unfamiliar with the use of the shedding blade, it’s not cruel.  It’s actually a Godsend for short-to-medium haired dogs.  You glide the serrated edge of the blade with the grain of the dog’s coat, and all the loose undercoat, etc. is just peeled right off.  If Clara had her way, I could brush her out with the blade for hours on end.  The blade does not work well with long haired dogs, or dogs with heavy undercoats, such as GSDs.  GSDs, Huskies, Chows- (i.e. Sheena and Lilo…)-heavy coated medium haired dogs- require the rake.  That sounds like a cruel implement too, but it’s not.  It just digs deeper in the coat to remove all the loose undercoat.

Sheena is quite fine with being raked out, which is nice, because she has that ungodly wooly Husky undercoat.  Lilo also has a thick undercoat but she is incredibly body sensitive so I let Jerry go after her with the rake, and with the bathing.  None of our dogs like water.  I find it funny when we take the dogs near any body of water.  They all avoid getting wet, as if the water was hot acid, especially Lilo.  That is particularly amusing – our dogs cautiously avoiding the water- as we watch other people helplessly getting dragged into the drink by their Labradors.   Never take a Labrador to a body of water unless you are planning on either you or the dog or both getting wet.

Sometimes the girls just plain get gamey. In spite of their dislike of water they must be bathed on occasion, which inevitably ends up with me, a boat load of towels, and the entire bathroom being thoroughly saturated. (Another reason why I need a working dryer!)  Clara tolerates her bath.  Clara is compliant, but she doesn’t like anything to do with getting wet, and she’s very glad when it’s done.   Sheena is mildly uncooperative with her bath and requires a little elbow grease to keep her contained.  Lilo positively despises being bathed, and has to be physically picked up and placed in the tub, but the last time I was able to keep her under control and get her reasonably clean. 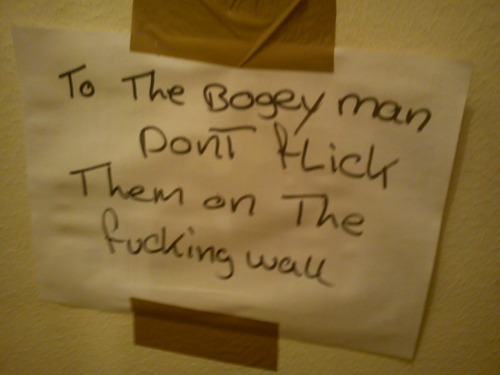 This is the reason why I never, ever touch the undersides of tables or desks- or the sides of bathroom stalls for that matter.  I remember way too many study halls in high school watching the gross kids scrape their boogers under the ledge of the desk.

We had a particularly sadistic English teacher (thankfully he wasn’t smart enough to teach AP English, so I never had him for class) who was also a wrestling coach.  When he monitored study halls he liked to slam books on the desks to wake anyone who thought about sleeping.  I wonder if he quit or if he was fired for (allegedly) knocking up those cheerleaders.  That was back before DNA technology could scientifically pin him down as The Baby Daddy, as opposed to being maybe one chance in five, so I would assume the former.  I doubt if those dingbats even knew for themselves who the baby daddies really were.  The key to blaming one guy for being The Baby Daddy is to only do the horizontal mambo with one guy- unless you’re up for DNA tests on Montel, which was not possible back in the mid 1980’s.

I usually occupied myself by reading or drawing on the rare occasions my schedule allowed me a study hall.  I was very good at hiding my National Lampoons and MAD magazines inside of Scientific American (which I also read) or other serious-sounding techie type magazines, to enjoy throughout a mind-numbingly boring study hall if I wasn’t already in the middle of a Stephen King novel or other “recreational reading.”  Teachers generally left me alone as they just assumed I was reading above their heads (sometimes I was) and therefore was not into “contraband.”  I liked humor and smut as much as the next person. Unlike other people who were too stupid to change the covers on risque books, I got away with reading them whenever I wanted.  I read anything I could get my hands on, but even with a collection of smutty literature that would have made a trucker blush if it were illustrated, I could not completely ignore the depraved humanity around me.  The sight of assorted unwashed losers picking, examining, and then scraping their big slimy greenies under the desks is still enough, even after all these years, to keep me from touching anything under a ledge with my bare hands.