With a tip of the hat to my fellow cynics and assorted other ne’er-do-wells like me, I’ve come to the conclusion that I should set aside a day to be thankful that things aren’t any worse.  For instance, if for some bizarre reason I were single and decided to troll the wonderful world of online dating, something like the above picture would be bound to show up, less the dog of course, as the dog would be his only redeeming feature.  I can just imagine the troll that some dating service would inevitably choose for me would actually look somewhat like the fashion-challenged ginger above, but would have a profile picture that looks something like this:

So much for truth in advertising. Of course, if he really did look like this, he’d have to be gay.  Straight men are never that hot.  So I should be grateful that Jerry is not nearly hot looking enough to be gay.  We all know what happened to the ugly gay guy. He had to date girls.

I am also thankful that I am sitting here in beautiful Central Ohio.  The weather here usually sucks to some degree, in some sort of way, but one thing we don’t get here are tsunamis.  If there were ever to be a tsunami massive enough to hit Columbus, rest assured that most of the rest of the world has been knocked out too.  We do get floods (frequently, but localized) and tornados, and snow storms on a regular basis, which can be bad enough, but even in the worst of the recent Downtown floods, I’ve never seen anyone in German Village floating on their house ten miles out at sea.  Granted, the Great Flood of 1913 was really bad, see the pics here , but that was before the Army Corps of Engineers built the series of dams and reservoirs on the Scioto and Olentangy Rivers.  I have seen Infiniti Q45s towed in filled up to the belt moldings (where the window glass meets the door) with poo-filled sewer water, and a whole shipment of used Corollas acquired in a rather shady auction deal with bizarre electrical problems and shift consoles packed in flood mud, but that’s pretty piddly compared to what’s going on in Japan.

There can be earthquakes in the Midwest, but generally the Central Ohio area is a geologically stable zone.  We likely wouldn’t get severe damage if the New Madrid Fault were to generate earthquakes as it did in 1895.  It would, however, really suck anywhere along the Mississippi or Ohio Rivers.

At least I’ve not gotten motivated to get these memos (yet):

I haven’t descended into that dark a level of depravity.  It would be fun to see the expressions on certain people’s faces should they receive such a memo though. 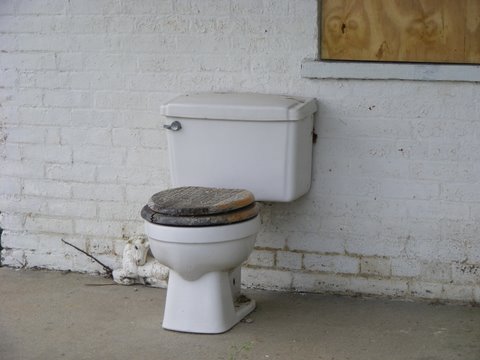 I am thankful for flush toilets and for not having to use them outside.  The thought of having to use an old time latrine or outhouse like we had to do at the Girl Scout camp is downright frightening.  There’s something most off-putting about having to a.) use a flashlight to get to the latrine, then once you find the latrine you have to b.) shine the flashlight in and around the hole to check for unauthorized insect, arachnid and reptile life, and c.) smell the acrid stench of hundreds of other people’s decomposing urine and feces.   To add fuel to that fire, I’ve not entirely overcome my fear of flying and crawling insects or wayward arachnids.  Reptiles never really bothered me, probably because there aren’t very many venomous species in Central Ohio.  Usually on the rare occasion anyone happened upon a snake, it was a small, harmless garter snake.  There are copperheads and rattlesnakes, but both copperheads and rattlesnakes are fairly rare and are found mostly down south.  Nothing terrified me more as a child (and everything terrified me) than flying, stinging insects.  I hated them- bees, wasps, hornets, anything with wings and a stinger- and there is no shortage of any winged stinging insect around here in summer, especially mosquitoes- believe that.  I can thank my sisters for that hyped-up terror, as they found it most amusing to throw flying, stinging insects in my hair.

I’m thankful that not too many people would find it amusing to throw live wasps in my hair today.  Cougardom has its advantages.  So does short hair.

I’m thankful I don’t drink anymore, therefore I am not subject to hangovers.   I am still subject to Jerry’s “drunk and stupids” followed by the sappy, lingering,  pathos of his hangovers, but there is humor to be found in that, so it’s a wash.

I am also thankful that there will soon be a day when we no longer have to hear about Obama.

I am thankful that there will be a day when Steve-o is out of school, gainfully employed and fully financially independent of the parental units.  The sad part about that is he will probably move down South and then I’ll only see him on holidays.  But that will give me an excuse for a road trip and somewhere to go on vacation, so that has its advantages as well.   I might not be terribly averse to retirement in the South, as long as he doesn’t move into some backwater holler straight out of Deliverance.   I like living in the city despite the crowds and traffic.  You can find things like food and medical care and employment a whole hell of a lot easier in the city.

I don’t get to travel and stay in hotels, therefore I don’t have bedbugs.

I have three nice warm dogs who love me even when everyone else on the planet is screwing me over.  I think I saved the best for last.