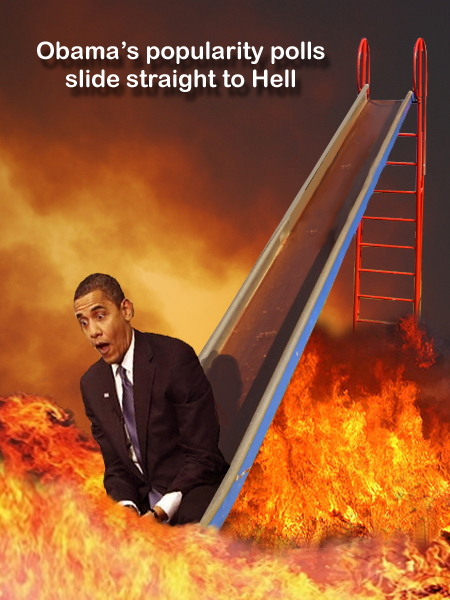 Color me vindictive, but I don’t believe everything I read, and even if I see it, I don’t necessarily believe that either.  It’s obvious that this picture is not proof that Obama literally took a trip down a kiddie slide to the Lake of Fire, although it is a mildly entertaining visual.  Documents can be forged, too.  With enough research and time and friends in low places, I could come up with a realistic looking birth certificate from anywhere.

I don’t really care where Obama was born- in a barn, in a box, in a train, with a fox…I do not like him, Sam I Am.  I would sooner vote for Green Eggs and Ham.

The eligibility to hold office issue is serious, and thumbing one’s nose at the Constitution is not to be taken lightly, but I am more concerned with Obama’s performance (or should I say lack thereof) as President.  As much as I want to try to say something nice about the guy, the only nice thing I can honestly say about him is that he makes Jimmy Carter look good, Bill Clinton almost appear to be honest, and Dick Nixon. by comparison, is as innocent as a choir boy.

Even if Obama’s birth would have been filmed for posterity, and was undeniably proven to have occurred on American soil, and he were born to two verifiable American citizens, the fact is, he has brought more of what this country absolutely does NOT need.

Railroading through “Obamacare”- a nightmare of regulation and red tape engineered for the sole purpose of making healthcare even more impossible for the middle class to pay for.  Of course,  the middle class is stuck paying for everyone else to get what the middle class can’t afford- for free.  I’m proud to know that my tax dollars are paying for geezers on Medicare to get free pecker pumps-so they can still have fun in the sack, while I scrounge and go without other necessities just to be able to pay outrageously inflated prices for my own scripts and insulin- to keep myself alive.

The fact that Obama and his minions refer to abortion as “healthcare” and want tax money to pay for that too is simply more evidence of how morally bankrupt this guy is.

Sucking up to foreign despots and sympathizing with terrorists (*newsflash*- enemies of the state are NOT to be accorded the Constitutional rights of US citizens…) instead of growing a pair and calling evil for what it is.

Failing to again, grow a pair, and inform the Welfare nation that the handouts (especially those paid for at the expense of those who not only work for a living, but pay for all the deadbeats too) are officially dried up. 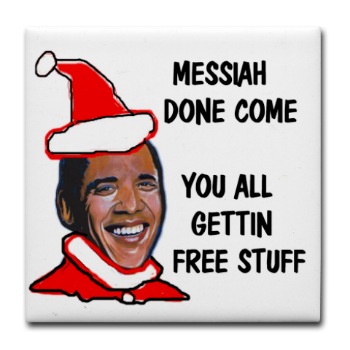 Failing to declare a national state of emergency and REQUIRE that we drill for oil where it is available here in this country, regardless of the NIMBYs, regardless of the cries of the tree huggers and the trial lawyers that will inevitably follow them.  Drilling for oil and environmental conservation are not mutually exclusive goals.  The reality is until we find a viable replacement for petroleum we need to produce our own and end our dependence on foreign oil.  If we were able to supply our own oil- even on a temporary basis- we could tell the entire Middle East to go blow.  Let them kill each other, since that’s what they want to do anyway, and when the jihad ends and the dust clears, we can move in and take it over.  They get their 70 virgins for boldly dying in jihad, (or eternity in the Lake of Fire…depending on your perspective) and we get the oil.  Win-Win!

Sucking up to Islamic nut jobs who want to see all Americans dead.  Islam is NOT a “religion of peace.”  Anyone who claims that has never read the Quran or learned much about the life of Mohammed.  Get a clue.  But it goes back to sucking up to terrorists and not having the balls to call evil what it is.

Generally I try not to be too obsessed with things political, because that’s one of the easiest ways for me to get aggravated about things that in large part, I can’t change.

I’ve heard it said that we get the leaders we deserve.  Apathy, ignorance, and a taste for free bread and circuses gave us Obama.  I can only hope that someone, somewhere, will give the Republicans a better choice than:

Donald Trump:  I like the Donald in many ways, especially by being a thorn in Obama’s side, but he’s too sensational, and he reminds me way too much of Ross Perot.

Sarah Palin:  I like Sarah too, but she’s too flighty and too easily mocked by the media.  They hate her, and will do anything to cast her in a negative light.  I hate to say it, but she also does come off as being a dingbat at times, which doesn’t help her when the media is looking for any slip of the tongue, educational gap, or error in etiquette.

Huckabee and /or Romney:  I never liked either of them.  Both are lame, not conservative enough, and the same old warmed over tired guys from 2008.

I would like to see Chris Christie run.  I think he would be a very good choice to not only supplant Obama, but to reverse some of the damage Obama’s done.

I know that Obama releasing a long form of his birth certificate is not going to satisfy the “birthers” or settle the debate about his eligibility for office.  The Fourteenth Amendment, Section 3 gives Constitutional validity to impeach Obama right off- without even looking at the birther issue.  Something there about giving aid and comfort to enemies of the United States rings a bell.

Perhaps Obama and his flagrant disregard for human life, morality, the Constitution and other essential components of American government as it was intended to be will wake some people up out of their apathetic fog come 2012.  What is equally important is that he is not replaced with yet another milquetoast puppet, but a real leader.

If the choice were between Obama and Ron Jeremy, (thankfully it’s not…) I’d probably have to go with Ron Jeremy, and that’s sad.