Yeah, I did get to go to Niagara Falls back in ’04 which was extremely cool.  If we decided to go now either I would have to get a passport, which I am loathe to do in these days of 1984 meets Logan’s Run, or we would have to stay on the New York side which is both expensive and dismal.  I don’t want my car stolen.   I am not arrogant enough to think that someone would specifically want to spy on me or steal my identity, but I do believe in Murphy’s Law.  Give Mr. Murphy and company time to screw about in one’s past records, and Lord only knows what might get added, deleted or screwed up.   I really don’t need to go to Canada that bad.  Besides, the food all tastes like Clorox up there for some reason.  I’m sure there must be some good cuisine in Canada, but it’s sure as hell not at Niagara Falls.

I thought taking Mom and Dad to North Carolina would be a disaster, but it was actually a pleasant long weekend.  The drive wasn’t as traumatic as usual – not a lot of traffic, and no rain.  The only thing that sort of sucked is that Dad didn’t want the stereo turned on.  It wasn’t incredibly hot either like it was last year, and we did get an afternoon out on the lake in the boat which was almost worth the trip.  How anyone can get sunburn in spite of marinating in Factor 50 is beyond me, but my back still itches.  I would hate to think how fried it would have been without sunscreen.

The only sort of drawback to summer is that’s when I’m the busiest- busy at work, busy at home and I don’t get enough time to do relaxing things like float about in the Cougar Pool (which is most delightful by the way) or read interesting books.  I’ve not even been able to be online enough to catch the whole Wiener scandal, which I really shouldn’t find funny, but of course I do.  Of course I adore travel, but I highly doubt I will get much more than a couple of day trips to the campground, up to Marion, or down to Cincinnati.  What I would really enjoy would be a Cougar Cruise, but I don’t see that happening any time soon.

Steve-o’s 20th birthday is next week.  He wants to spend it down in Kentucky 4-wheeling through the hollers with his buddies.  He wasn’t born a southerner- but should have been one- as much as he is into redneck culture and activities.

Maybe I shouldn’t have bothered to fix his teeth? 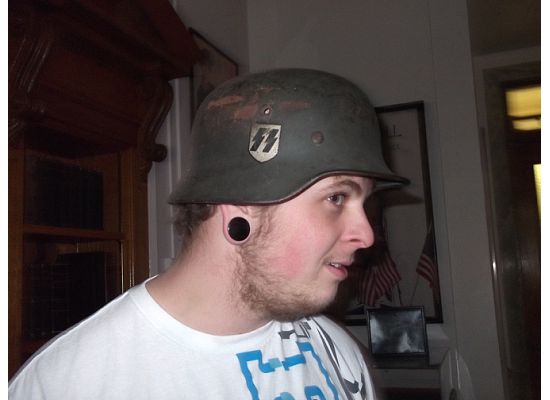