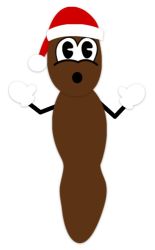 For a turd, Mr. Hankey is almost cute, but the concept of making turds into cartoon characters is sort of gross.  Leave it to the creators of South Park to take gross things and make them almost cute.  Then again, things scatological almost always engender at least a morbid curiosity, if not downright explosive laughter.  Farts, for instance are universally funny, especially if they come from a dog (When Clara farts she has to spin around and look for the source of the noise- a sort of the “smeller’s the feller” type give away- which makes a dog fart even more hilarious) or when they sound or smell explosive. 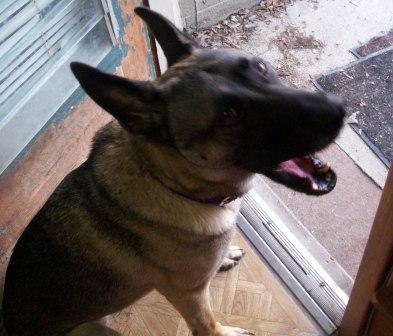 Clara is beautiful, but her SBD’s (and the audible ones too) are truly deadly.  I don’t know if there is something particularly volatile in dog food (though with our girls at least, it could be that nasty old mutton) but dog farts are second only to old man diaper farts in the acridity of the noxious gas emitted.

Perhaps it is proof either that I am being honest with myself or that I’m just plain sophomoric and puerile at times, but most of the time for me gross=funny.  I’m old enough to remember the beginning of the gross toys- Slime and the Garbage Pail Kids. 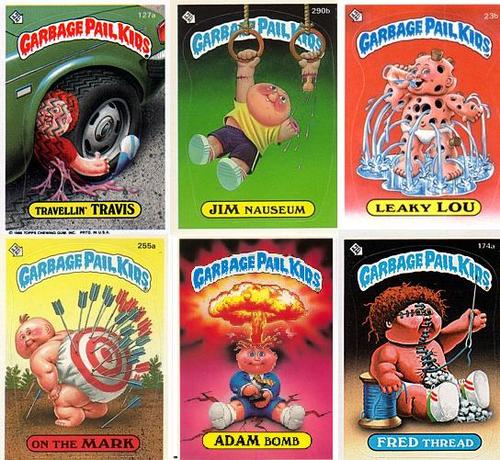 Slime was always good for making fart noises with.  Mom, of course couldn’t stand it.  The GPK cards caused a wellspring of parental disgust, and could carry dire consequences should teachers catch you with them.  I thought it hilarious when one could actually buy school folders with the card designs on them.  Some teachers could care less and decided there were more worthy battles to fight, but others were so wigged out by anything GPK that you had to cover them up or get rid of them.

Personally I think they should have been more worried with the teen pregnancy and drug abuse that were epidemic when I was in middle school and high school than to obsess with fart sounds or crude trading cards, but to each his or her own.  Sometimes you can only bear to fight the battles that you might have a chance of winning.

Today there are a plethora of gross toys and macabre games out there.  I was mildly shocked when Steve-o decided I should watch him and his buddies play Call of Duty on that behemoth TV he bought under the pretense of “I need a bigger computer monitor.”  I know full well he’s not blind, and you would have to be legally blind to require a 42″ flat screen as a computer monitor (my fossil ass does just fine with a 15″ laptop, so he’s not shitting anyone) but at least he paid for the flat screen so I really can’t comment.  Anyway, Call of Duty is probably the most realistic video game I’ve ever seen.  It puts some of the 80’s slasher flicks to shame as far as the special effects.

I think Steve-o’s favorite part of the game is that he can pretend to be a a Luftwaffe fighter pilot.  I know he knows the actual history, but I still can’t help but to rub it in.  The Germans lost.  Face it.  Superior technology doesn’t matter much when you lack the raw material, the logistics and the strategy to put the technology to good use.  Hitler is not a role model. 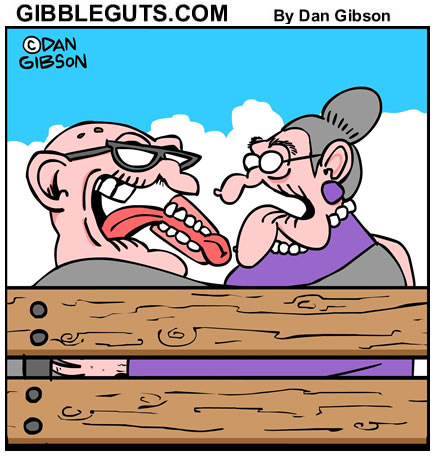 I’ve said it many times.  I am not a physically demonstrative person.  There are people for whom it is perfectly natural to touch, hug, get right up in people’s faces, eat off each other’s plates, etc. and they think nothing of it.  Then there are those, like me, who put a premium on maintaining personal space.  I like to enjoy my own private entree with my own private silverware all to myself, as well as I prefer to enjoy my own private beverage in my own private glass, bottle or mug, without sharing bodily fluids or wayward bacteria with others.

I don’t hug on strangers.  To me “stranger” is defined as a non-blood relative who I am not married to and who is not a very close friend.  I am not even terribly cool with hugging on blood relatives except when hugging is required in a social setting.  I don’t enjoy it, but I will hug when politeness dictates that I should.

There are people like my mother who hug anyone, anywhere, for pretty much any reason, which to me is just plain creepy. It’s as bad as letting other people drink off your cup.  I can’t even let my own kid do that.  Or the dogs for that matter.

I do think that over all the world has more huggers than non-huggers if this article’s feedback- “Are You a Hugger- is any indication.  I still think random hugging is creepy, even though my take on hugging may be a minority stance. 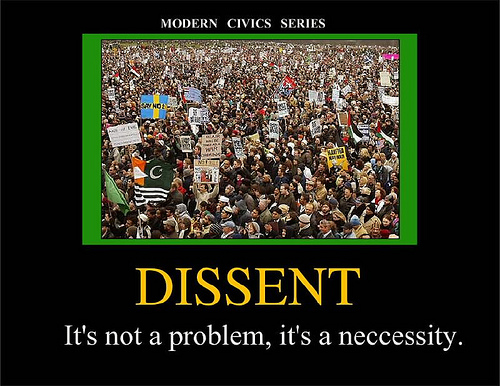 Just do the world a favor and know what you’re protesting before you decide to “occupy” anything more lofty than a portajohn.

One thought on “Gross, Macabre and Just Plain Creepy”