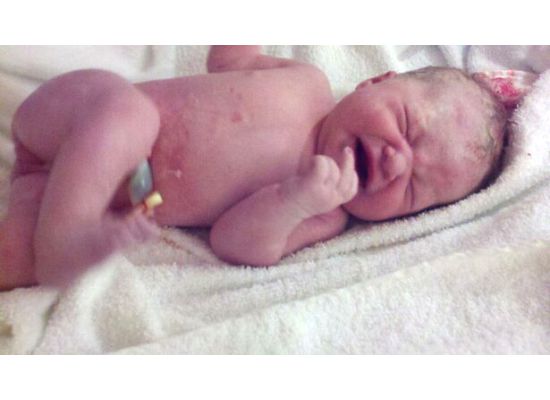 I am thankful that my new granddaughter (yes, the prognosticatory machinations of modern science were correct, so no need to take back any of the pink and/or Hello Kitty goodies) has arrived safely and in good health.  Mom and Dad both came out of The Birth Experience pretty well, except for I had to have a few come to Jesus talks with Steve-o about why it’s a good idea to let Mom choose when and how much pain relief is necessary.   I certainly can’t imagine drug-free childbirth in any circumstance, let alone when the child is over 8#.  I’m glad she did opt for pain relief, and I’m glad that she didn’t end up needing a c-section.  I only wish that in the Murphy’s Law Childbirth Experience from Hell that I had when Steve-o was born that they would have bypassed the futile and painful 18 hours of induced labor and skipped right to the general anesthetic and c-section.  It would have been a whole lot easier that way.  Humans discovered painkillers- and surgical techniques- for just such circumstances, because there’s nothing natural about childbirth.  Unless you are a masochist and get off on pain, that is. 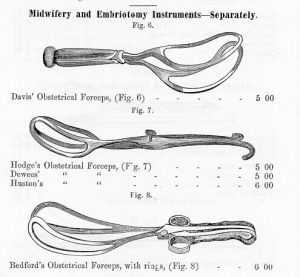 Different strokes for different folks, but as far as I’m concerned, childbirth is a time to break out the good stuff like Demerol, etc.  They offer you Vicodin for a broken arm- which is nothing compared to labor pain, believe that.  I think Steve-o got the message when I suggested to him that he should have had his root canals done “natural and drug free.” Then his tune sort of changed to: “Damn straight, get the epidural!”

On the plus side, Steve-o stuck out all the messy parts including cutting the cord, so I have to say his curiosity must have won out in the end.  It’s a bonus that unlike most newborns she didn’t come out looking like a space alien or, considering that she has some of my DNA, a miniature mutant troll. Since Steve-o is a man who likes to voice his opinion, I gave him fair warning that even if the child came out looking like something from the Gremlins movie or worse, that he better at least say she’s the most beautiful thing he’s ever seen.  I am glad he didn’t have to lie, because he is a really terrible liar.  Her head wasn’t even deformed, and she has long legs. Most of her mother’s family are tall people, and Steve-o, by some luck in the genetic draw, has normal sized limbs, so hopefully she might end up with better proportions than mine. 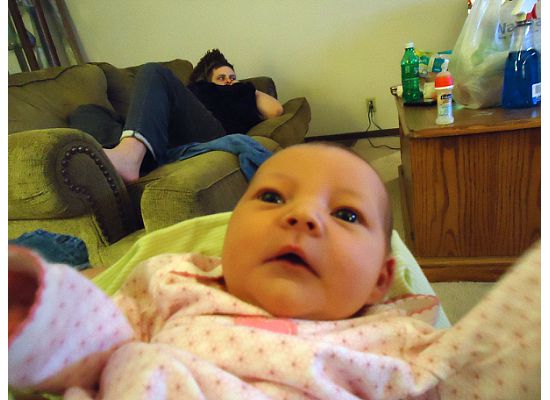 For three days old she doesn’t look too bad.

Admittedly it’s hard to get used to the grandma thing. My grandmothers were well into their 50’s when I was born, so they were always little old ladies to me.  I still like cranking up Metallica in the car and going to the waterpark, and I still have all my teeth save my wisdom teeth that I had to have chiselled out of my jaw when I was 17. I am pleasantly surprised that Steve-o at least waited to spawn until I was over 40.  An hour and four minutes later and she would have arrived exactly on my 43rd birthday.  I am glad for the distraction.  Nobody gave a rat’s ass about my birthday, (for different reasons than usual, because my birthday is usually forgotten anyway) which was quite fine with me.

I’ve noticed a few things since I’ve joined the cougar set, as far as little survival tips.  Of course my focus is on the things the glamour mags and those horrible vapid “women’s helper” type publications never bring to light.

One of the worst indignities associated with impending menopause and menopause itself is the proliferation of facial and body hair.  For a woman who has always viewed hair in unauthorized places to be vulgar and just plain gross, this is a difficult situation to face. It’s bad enough to have furry armpits.  A moustache on a woman- especially one of Anglo-Saxon heritage- is entirely beyond the pale.  There are only a few ways to remove said superfluous fur (that poor women like me can afford, anyway) and they all have their advantages and disadvantages.

Shaving Pros: Relatively inexpensive, relatively effective.  Shaving Cons: Has to be re-done as often as every other day, carries some risk of inflicting injury and drawing blood.

Depilatory (aka- Nair) Pros: Extremely effective, can be used over a large surface area, moderately fast. Depilatory Cons: Stinks to holy high heaven, can burn holes in your face if you leave it on too long, messy.

Waxing Pros: Extremely effective, lasts a long time.  Waxing Cons: Hurts like a son of a bitch, can’t even be done until the hair grows way out and you look like Sasquatch. 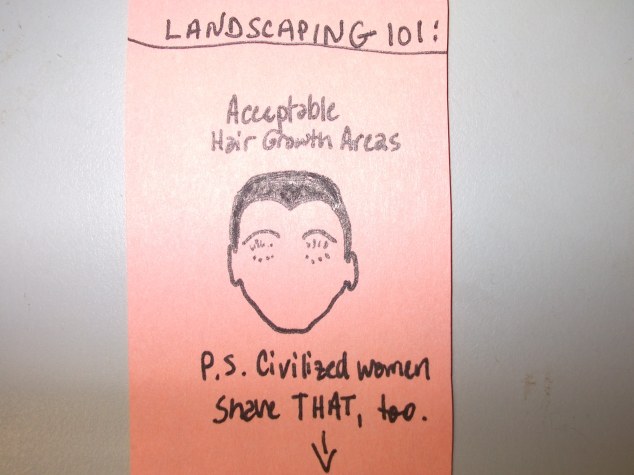 There are only a few areas that are acceptable for hair growth on women.  The scalp, a finely sculptured brow, and eyelashes.  Everything else (and I do mean everything) should be devoid of fur. At least if all the unacceptable fuzz is removed there is no quandary as to whether or not the curtains match the carpet- and no need for the hair dye that is supposedly available to tint the hair that grows in unmentionable areas. I find it hard to imagine worrying about whether or not I have grey pubes.  Better to shave all that off for aesthetic and hygienic reasons.  It’s just not right for women to scratch their business in public.  A dude may finger his package in public with impunity, but impulsive crotchal scratching is not considered to be suitable etiquette for the fairer gender.

There are some things that we cougars can get away with though.  Ogling hot young stud muffins for instance.  What sweet young treat would be intimidated by an old bitty who’s old enough to be his mother?

Yes we look.  We still undress you with our eyes, believe that, boys. 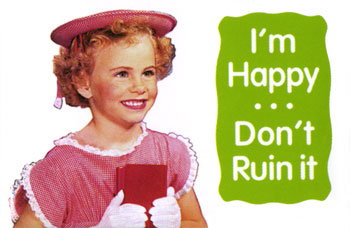 4 thoughts on “New Happenings,Getting Used to the Grandma Thing, and Advice for New Cougars”