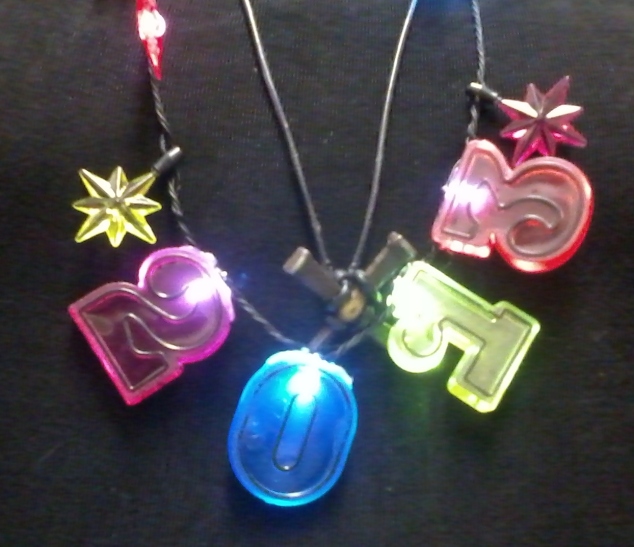 I usually don’t succumb to the lure of corny party kitsch, but the light up necklace was cute.

I’ve said before I don’t deal much in the currency of optimism, so I don’t see this year being much of an improvement over last.  In fact, I started today out rather depressed.  Today’s been one of those days where I’m actually trolling for things to cheer me up a bit.  I’m actively fighting against the urge to just concede to the Dark Funk and give up.  I guess the fact that I’m fighting the temptation to just give into hopelessness is either a good sign, or it’s just an unwillingness to face the reality that my life is pretty much hopeless.

Things that Suck that I Can’t Change:

Personal poverty/ not being financially independent

Being stuck in Ohio, especially in the winter

Things that Suck that I Can (*theoretically anyway) Change

My own reaction to things that suck

I already turn off the “mainstream” TV news (can’t handle the constant Obama worship) and I already avoid following garbage on TV such as anything Honey Boo Boo or the Kardashians are doing.  Admittedly I probably get into true crime shows (TruTV, Discovery ID, etc.) and the Military Channel way too much.  I should probably cut down on “World’s Dumbest” and “1000 Ways to Die” and get back into reading a lot more than I do now (although I read a lot by any standard) and maybe get into something a bit more uplifting than unsolved murders, people earning their Darwin Awards, and 20th century history.  I mean, how much is left unturned regarding WWII and Adolf Hitler?

The dogs and cats

There is no vacuum cleaner made that I don’t have to unclog, tear apart and otherwise rework every time I use the damned thing. 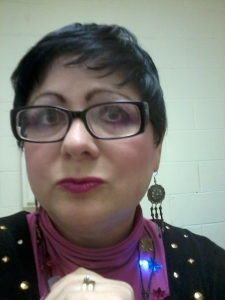 Somehow the deer in the headlights look is a little too typical for me.

Now that I’ve determined that God and the dogs and cats don’t suck, then it should probably follow that I should spend my time in the company of Entities that Don’t Suck as much as I can.

Since for now I do appear to be vertical and sucking up valuable oxygen, let’s be creative and try to enjoy it!

I rather enjoy Victorian ephemera- especially patent medicines and other creepy stuff from that era.  I’m surprised anyone survived being treated with the stuff they used as medicine back then, since most of it included either alcohol or opium or various poisons like arsenic, but even today there’s some pretty questionable stuff being used as medicine.

Imagine the same scenario today, only the rednecks have chainsaws, and the little girl has a bottle of moonshine.

That’s actually one of the few French phrases I remember from high school French class (Why in the hell did I take French?  Did I think I was going to be deported to Quebec?) and it means, “The more things change, the more they stay the same.”  Yes, they do, and not always in a good way.

I didn’t think Harry Potter had to worry about VD.  Or was that “mugworts?” That sounds like VD anyway.  Something like that.

I’m thinking “Bad Hump” would be a better name for a VD cure-all.  “Take this stuff for last week’s bad hump.”  Or you could just leave it to Dr. Butts: 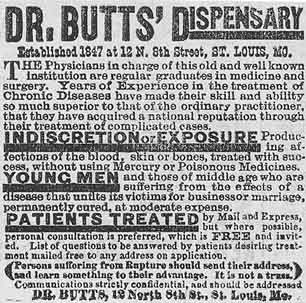 I want to be cured via the US Postal Service.   By Dr. Butts. Yeah.

It’s really kind of scary considering that there really were no cures for VD in Victorian times, and if you got the syph or the clap it could kill you.   Sort of like AIDS today, and heaven only knows whatever other deadly STDs are lurking out there that nobody knows about yet.  Forced chastity might bite in a lot of ways, but I’m old enough to know that 1.) no man is worth a deadly disease, and 2.) there are such things as “meat substitutes” if you get my drift.  The advantage of the “meat substitute” is you don’t have to fix it dinner or unclog its cigarette pack cellophanes from the vacuum cleaner.   I only wish I’d figured that out 20 years ago. Just don’t run out of batteries.

Why is it that back in the day being German cast some sort of legitimacy upon medical quackery?  And I find it hard to believe that a medical doctor would spend most of his life on a hemorrhoid cure, but then everyone needs a purpose.  I’ve still not figured out exactly why I’m still sucking up valuable oxygen, so I’m the last one to talk.