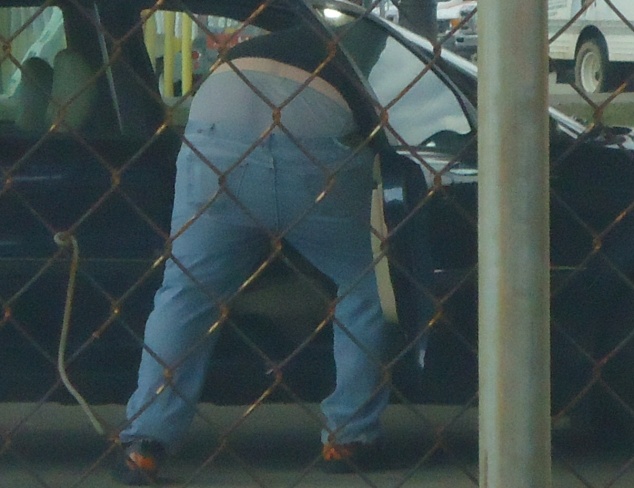 When, oh, when will the “pants halfway down the ass” trend go out of style?

This just plain looks dorky, and further proves my theory that the devolution of humanity is moving forward at an incrementally swifter speed. The other disturbing fashion trend I observe rather frequently here in beautiful central Ohio is large women failing to wear enough clothing to adequately cover their surface area.   There is no crime in being large, but I don’t want to see your “muffins.”

I also feel it unnecessary for you to burn my retinas with the visual of your behemoth buncakes so tightly wrapped in stretched out spandex so that I see both the cellulite and your size 20 thong.   Neither do I want to see the misspelled memorial to “Cuzzin Skeezix, RIP 6-3-03” that’s tattooed on your shoulder along with a badly drawn eagle with “Freebird” written under it.  Either you’re memorializing your cousin, or paying tribute to Lynryd Skynyrd, but it’s sort of in poor taste to do both with the same tat. 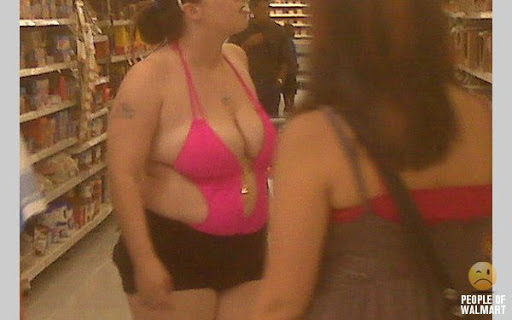 May I suggest less revealing swimwear?

Really?  You thought your two year old’s shorts would fit your lard ass?

I’ve wondered for a long time where the pink toilet paper went.  Grandma always had pink toilet paper, to match her pink bathroom and her pink shitter lid covers and all that, even though Mom got on her about it because Mom thought there was something in the dye that would both clog up the john and give you ass cancer.

Then again, Mom had some pretty weird thoughts about both plumbing issues and what gives you cancer.  In her world there was a major choice between pouring bacon grease down the sink (granted, that will clog up your plumbing, and I do not advocate pouring grease down the drain) and getting cancer from consuming bacon and/or bacon grease.  I solve that problem by letting the dogs eat the bacon grease, because I figure Jerry eats enough bacon that if it gave one ass cancer he would have it by now, and dogs don’t generally live long enough to get ass cancer anyway.

However, I don’t pour bacon grease down the sink.  Ever.   That shit will clog the pipes, and the plumber is expensive.  The last time I had to call a plumber was over the catfish head in the disposal.  That cost $250 as well as the dude left an epic shitcaked mess all over the kitchen floor.  You would think for that kind of scratch the dude would have returned my under-sink items to their former locations and freaking mopped the floor. 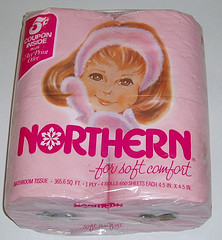 Grandma had these stacked under the bathroom sink.

Even so, I sort of miss pink toilet paper in a strange kind of way.  It did cost a bit more than plain white, but not that much more to make any kind of difference.  I think the greenies scared people off of it, but Grandma had neither ass cancer nor plumbing issues associated with it.  For my own use, I prefer regular white toilet paper, simply because it’s easier to see whether or not you got the job done, but colored toilet paper was sort of a curious thing.

I’m kind of glad to know there are people weirder than me.  For instance, who would want black toilet paper?  Vampires?  And if you can’t see what’s on the paper how do you know when you’ve finished the job, unless you have a wet wipe -or a bidet? 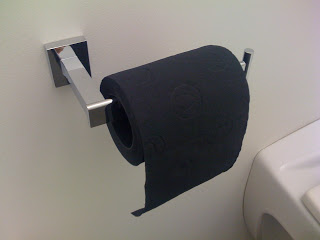 This might be a hit at the funeral home.

Then there’s the quandary regarding men and toilet paper.  If a roll lasts a single guy a month, what is he doing with it? I have to assume he’s blowing his nose with it (men do not buy Kleenex, but they will use them when women strategically place them) but probably not wiping his ass.

I do the laundry.  There’s either not much TP being used for actual hiney hygiene, or they’re doing it wrong.