When I was in high school I had a taste for bodice-ripper novels.  By the end of my freshman year I had an entire locker filled with discount cover-less $1.35 novels from the cigar store that were so graphic I had to get rid of them when school was out.  Mom would have found them in her regular treasure hunts through my stuff, and “smut” like that would have given my mother a coronary.  (I wonder if Beth’s mother ever found them, but then Beth’s Mom wasn’t nearly as snoopy as mine,  which is why I gave them to Beth in the first place.)  I always knew Mom snooped, so I made sure Mom never found anything good such as cigarettes, “smut” books, birth control pills, short skirts, fishnets, etc. in any of my stuff.  I had a few friends once I got a car, and with them, divers places to stash incriminating stuff. 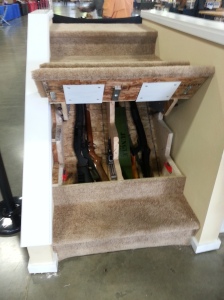 I like the concept of stashing one’s guns under the stairs.  I like stashing the gun next to the bed even better.

I wasn’t into ordinary flowery *clean* “romance” stories (think Hallmark Channel snooze fare, or the Harlequin romances Grandma liked to read.) I liked the more juicy ones that usually didn’t have much for a plot, but didn’t leave out the graphic details.  Cut to the chase, already.  I also had a taste for mystery and who-dunnits for a time, along with my usual historical and scientific non-fiction fare, but when I was in high school I would pretty much read anything and everything I could get my hands on.  Today, because I have to do other things (like it or not) I have to be a bit more judicious in my literary choices.  Let’s face it, the myriad ways of performing the conjugal act get a bit overhyped at times, and I need a bodice-ripper like a hole in the head these days. My imagination does not need any assistance in that realm.  Besides, If I’m going to spend time in fiction I want a good story.  Something with an actual plot that’s deeper than, “spying his turgid member, she unzipped his pants…” I want something epic, something meaty, or why bother?

Whether you like fiction or fantasy (normally I am not into either) or not, Tolkien is awesome.  I’ve read these more times than I can count.

I never read a lot of fiction (other than the aforementioned bodice-rippers, and I’m really not compelled to go for bodice-rippers any more) but I did and still do like Stephen King.  I may not agree with his politics (I don’t) but he is a hell of a writer.  One of my favorites authored by King is the book IT, (not to be confused as a horror novel about IT, which is good given that many in the IT profession are quite scary enough,) so I simply had to get it on Kindle.

Maybe I shouldn’t put it like this, but Kindle is a hyperlexic’s high holy fantasy.  There are millions of books available for momentary download for a modest fee (and some are even free.)  Since my particular Kindle has 3G and Wi-Fi I can pretty much download anytime and anywhere, meaning I have to be careful in the Kindle Store.  I have limited myself to one book a week, and only if I have finished the previous one.  There is something just plain magical about having so much reading material at one’s fingertips.

My favorite Stephen King book, except for maybe The Stand.  It might be a tie.

I read IT back in 1987 shortly after its release in paperback.  I couldn’t afford hard back books at that time.  $4.95 was pricey enough back in those days, but worthwhile.  I couldn’t put it down- and read it the first time in about two days.  This time I am taking my time and only reading a few chapters at a time, for no other reason than I don’t have entire days to lock myself away to just read anymore.  I really miss being able to do that from time to time. I am one of those incorrigible nerd types who can get lost in a book and forget just about everything else.

IT,  I am finding, is a more personal story for me now than it was in 1987.  When I read IT the first time, there wasn’t much distance between me as the 10 year old and me as the 18 year old.  It was a great story, but I didn’t really identify with the characters back then.  Today I can understand their perspective much better.   There is a lifetime of distance and several changes of spheres between me as the 10 year old, and me as the forty-something.  There are those long-forgotten incidents and pictures from the back of the brain box that I don’t always acknowledge are there until some external event triggers the memory.  There are plenty of incidents I’d rather forget, and many pictures that are best left buried deep and not disturbed from their sleep.

Such as: every day.

Even more unnerving, just as Derry, Maine had its scandals and secrets and monsters in the closets (and the drainage system,) I come from a small town with a history that is mired in intrigue, scandal, untimely death and *evil?* just as the fictional Derry was.  Some of that history is fascinating and some of it tragic, but none of it rests well.  My own personal history rests uneasily too.