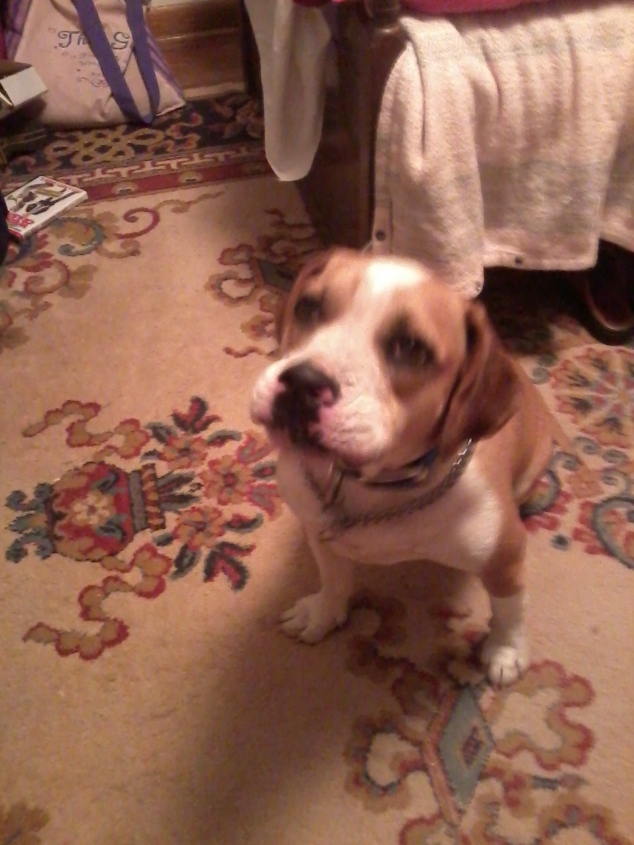 Lucy is clearly not a Belgian Malinois (most likely Bulldog and Beagle) but as Mick Jagger once sang: “You can’t always get what you want /But if you try sometimes /You just might find /You get what you need…”

Even considering the insight of the Rolling Stones, I didn’t really need a third dog.  Even so, I was surprised it took Jerry from May to September to end up with another dog.  I wanted another Malinois for Miss Clara to mentor, (and I still do) but when a stray dog (almost) got into it with one of the ankle biters at the campground over table scraps, Jerry had to intervene, and rightfully so.  I couldn’t say no to that face and those eyes.

Either we took Lucy with us, or she’d have ended up with an ass full of buck shot, as the owner of the ankle biter in question would not hesitate to do it.  It was a no-brainer.  We took Sheena, messed up as she was, because she needed a home and we had a space.  Lucy, even though I have little to no experience with either bully breeds or hounds, has a lot more going for her than poor Sheena did. 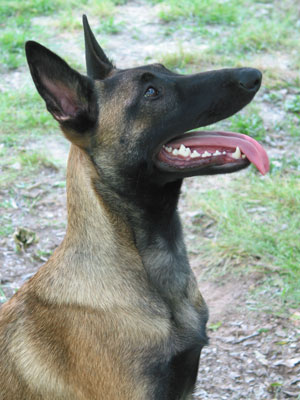 This is a young female Malinois- not Lucy!

Unlike Sheena, Lucy can hear. Lucy also has teeth. She has a bit of an underbite, (normal for Bulldogs) but she still has 42 sturdy, clean, white teeth.  She’s also young (about a year, according to the Vet) and to our shock, had already been spayed. I feel bad that she was put under anesthetic and cut on only to find out she’d already been spayed, but how were we to know?  In spite of undergoing what proved to be an unneeded surgery, she’s in impeccable health- aside from having to lose a pound or two from her incessant moochings at the campground. (Who can resist those eyes and that face?) She should get down to a proper weight now that she’s on Diet Plate with Lilo and eating pretty much just dog food.  She also has a microchip and tags now, should she manage to wander off from us.

I don’t know why anyone would bother to spay a dog and then not microchip her, or bother to put a collar and tags on her, but that’s not my call.  Against my first instincts, I love this weird looking little dog, even though she waddles when she walks and drools in her sleep.  Even the cats are chumming up to her and kissing on her, (Jezebel especially loves dogs) which makes me wonder if she really went off on the ankle biter, or that if the ankle biter’s owners were just paranoid that she was hanging around and mooching.  Then again, in our house the cats don’t compete with the dogs for food.  The cats eat in a dog-free area, otherwise the cats wouldn’t get to eat at all.  As far as competing with the other dogs, Clara and Lilo are both a lot bigger than Lucy, and she strikes me as being smart enough not to pick a fight with either one of them. 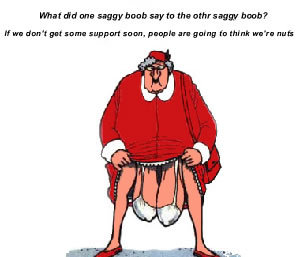 I’m starting to think my tits have mistaken themselves for migratory birds, as they have moved so far south.  I know my grandmother warned me when I was 13 that I should always wear a sturdy bra, and for the most part I have heeded her advice, but the effects of gravity, like those of other forces associated with entropy, are inevitable.

Aging sucks, especially when it challenges your deeply held belief that it won’t happen to you.

I’ve been trying to avoid the political landscape as that whole scene is just plain depressing.  I knew what a piece of work our illegitimate president was before he cheated himself into office the first time.  I’m not at all surprised by what’s going on, even though it’s puzzling to me why the illegitimate fraud squatting in the White House hasn’t been impeached, removed and deported by now.

-Apparently playing the race card can still get you very far even with no experience, talent or ability to cooperate with others, and apparently not enough people care that you are illegitimate and lacking any sort of merit, if you can claim a favored minority status- and that makes my blood boil.

Anyway, I told myself I would avoid political tangents today so I am trying very hard not to.  The bad part about trying to avoid doing something is that if you avoid it too hard you step right into it, sort of like when I try to go out in the back yard and try not to step in dog shit.  Usually when I’m hell bent on avoiding dog shit is exactly when I step in it.

Oh, the parallels between stepping in dog shit and the illegitimate, destructive and dangerous Obama administration.  The only difference is that dog shit washes off.