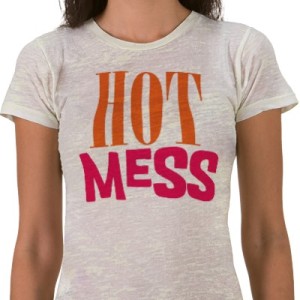 All I can think is that God must love a hot mess, which is good news for me.  The past two weeks have been rather crazy.  I’ve had to make some difficult decisions, two of them in saying no to things and situations that would have been desirable- except that the devil is in the details.

I did get to say yes to the car, which I had been mulling about for awhile, and the pieces came together fortuitously on that one.

But I had to turn down taking in a beautiful black Malinois (still a bit despondent over that one) because Jerry insisted on taking in Lucy last October.  I couldn’t say no to that, especially since we had lost Sheena last May.

Lucy, while she is a sweet dog, is definitely not a Malinois.  Lucy is a hot mess of a willful, disobedient and destructive Beagle mixed with English Bulldog (why, oh why would someone interbreed that combo on purpose?)  Clara, my (1/2 Malinois) sweet pleaser, obeys hand commands and head nods (she’s that intuitive) and Lilo, just knows and follows the routine.  I am still carrying Lucy to her crate in the mornings. She does not go to the crate of her own volition even though she knows she is going to end up there one way or another.

In the words of the philosopher/theologian Mick Jagger: “You can’t always get what you want/You can try sometimes/You just might find/You get what you need.”

Sometimes what I want and what I need are two completely different things.

I discovered last week that even though I’ve been away from the automotive dealer scene for almost fifteen years, just how easy it would be for me to go right back to where I was before (different place, same type of job.)  I was given the opportunity to do that.  I really, really wanted to, but again, the devil is in the details.  Thankfully I came to my senses and realized that 1. working straight commission is no way to live, because you end up living at work, and 2. it would be so easy to go back to that work-as-a-drug power trip euphoria.

The problem with that is when I live that way my entire identity becomes what (and how well) I’m doing versus who I am being.  And that is some scary shit.  That’s what landed me in my doctor’s office with ischemic attacks, bleeds in the scleras of both eyes and uncontrolled high blood pressure. That’s what got me the lecture from my doctor (when I was 30) that I wouldn’t live to see 35 unless I changed my lifestyle.

I made it to 45, so I must be doing something right, but in a rather unexpected and unsolicited job offer I learned something about myself that I don’t particularly like.

The bad thing is that in any environment where one has to deal with people, all of the noxious roadblocks to harmonious living, good business, and successful outcomes listed above are right there, wherever one may go.  So it’s better to deal with the devil you know than to buy into a whole ‘nother demon who may be even worse.

I remember reading somewhere that the devil can be in all the things you really, really want.  It sort of reminds me of when Satan tempted Jesus with all the kingdoms of the world- that somehow selling your soul is worth all the stuff you get in exchange.

I really don’t want to make deals with the devil.

Maybe somewhere along the line I went from brash hard ass to completely losing my voice (in a figurative way) and that’s another vexing place to be.

2 thoughts on “God Loves a Hot Mess, and the Devil Is in the Details”