I’m still trying to figure out this Rube Goldberg device.

This contraption, which I think is some kind of spinal correction device (?) could also have afforded some tactical advantage when other kids are chasing you down to kick your ass.   I can see where it could be a sort of almost skateboard without the board.   I love Victorian ingenuity.  Strange thing is that even in the early 1980’s (and I’m not sure whether or not this is still being done in schools) all the girls had to get checked for scoliosis in 7th and 8th grade.

The scoliosis check was not what I’d call a good time.  All the 7th and 8th grade girls were herded into the gym, (wearing those hideous gym suits, or in my case, since I had a Doctor’s Note permanently freeing me from gym class, a t-shirt and shorts) lined up in alphabetical order, then we either had to unzip the gym suit or pull up our t-shirt and let (supposedly) a nurse trace our spines with her finger and verify that our spines were straight.

If you were found to have scoliosis (a couple of girls did have it) then you were sent to an orthopedist who would fit you with a full torso brace with metal stays and tie up straps that you had to wear 24/7 for two or three years unless you wanted to become a hideously deformed hunchback.

Imagine having to wear this continuously – all through high summer.  Oh, the stink! 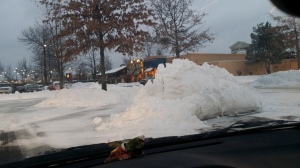 This is one of the snow piles outside of Target.  It’s 5°.

But, as always, they set up the swimsuit racks the week after New Year’s!

The City of Columbus, I must say has been doing an abysmal job in clearing the snow.  ODOT got the freeways cleared right away, but the major through roads that are the city’s responsibility, by and large haven’t been touched.  I have to wonder what the hell they’re doing with all that income tax money, since the state and the surrounding localities are seeming to cope pretty well with snow removal.  I know that corruption and graft and union thuggery run amok in Mayor Coleman’s hizzy.  I’m surprised he didn’t ask for emergency money from his homeboy Obama to clear out Downtown.

It didn’t used to be that way, and it’s sad.   The illustrious Mayor-for-Life Coleman has ran the police department into the ground, presided over (and approved of) the corruption and vice and absolute lack of accountability in the schools, and now the city can’t seem to get the crews out to clear the freaking snow.  Coleman will keep on getting re-elected though, because a.) there’s no term limit, and b.) he kisses up to the gimme crowd.  While everyone (me included) who can moves to the freaking suburbs because of the uncontrolled druggies and rampant crime-but if you work in the city limits (I do) you still have to pay income tax so this gimme-appeaser and cronies can keep on subsidizing the gimme crowd.   The worst thing about living in the suburbs is that I can’t vote against this shyster when he runs for (and gets elected) mayor again.

So much for the Things-I-Can’t-Change.

I have been somewhat remiss as of late in not posting more of those postmortems that people just can’t help gawking at.  It’s bad that I am so bored that I’m trolling postmortems again, but it is February.  What else am I supposed to do?  February always makes me think about death.  Maybe it’s because I have to go to the BMV to get my car registration, and that’s always depressing.

The only way I’d ever been that close to either of my sisters, voluntarily, is if I’d been dead– which I think these two are.

Generally, if either of my sisters had been that close to me when I was a little kid, it was because they had me in a headlock, pounding me with whatever sort of pointy or heavy object that was handy.

I am surprised that I actually survived childhood with only minor scarring and disfigurement.  The psychological damage- well, the Prozac does help.

Gam-Gam died in 1890, but those eyes are still watching you!

I know it’s morbid, but I think the postmortem pics are a forerunner of the Open Casket Funeral, which I find most distasteful in almost every instance.  I can’t get the images of my grandmothers in their coffins with badly done makeup, in those awful pink nighties out of my head, let alone the image of Aunt Ellen (the non-makeup wearing Pentecostal) slathered down with day-glo orange lipstick and all dolled up as if she were headed for the Oompa-Loompa Prom.

I told Steve-o to cremate me when I die, but knowing him (and I’ve said this before) he will have me taxidermied and made into a coffee table.

“Looking beyond the embers of bridges glowing behind us
To a glimpse of how green it was on the other side
Steps taken forwards but sleepwalking back again
Dragged by the force of some inner tide”-  Pink Floyd, “High Hopes”

I think we do ourselves a disservice when we neglect the study of history.  It may not be a good idea to continually live in the past, and I have to guard against this, but to deliberately seek a sort of live-in-the-now amnesia isn’t very healthy either.

I’ve learned to be careful which bridges to burn and which ones to leave standing, although I can’t say I’ve mastered the art of moving forward, or of knowing which pieces of the past are worth holding on to, and which pieces are things I need to let go.

I’ll have to remember to check the empty seats in my car for Hitler before I go.

I think I’d be hella nervous if I were approached by a giant talking frog. But I’m paranoid like that.