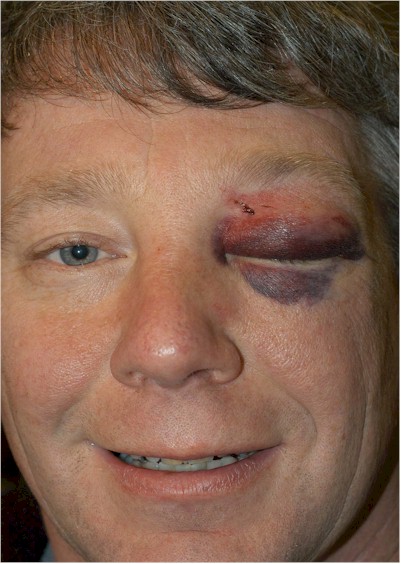 A quick disclaimer: While Jerry is currently sporting a particularly wicked shiner, like this poor gentleman pictured above, I didn’t have the opportunity to snap a pic of the genuine article.  This guy is not Jerry.  I don’t have a clue who the dude in the pic is, but he and Jerry have matching black eyes this morning.  And I am laughing my sorry ass off.

Perhaps that is a bit cold-hearted of me, but I have absolutely no sympathy for illnesses or injuries of the self-inflicted kind.  He got shitfaced last night (no, that’s not usually news) but the humor in this is that somehow, sometime very late last night, he managed to get off the toilet and fall directly into the corner of the towel rack.  His left eye looks like something out of the Rocky movies, and he has a nice goose egg on his left temple to boot.  The cosmic justice lies in the fact that he decided to go to the hell-hole across the road to blow money on gambling tickets and get shitfaced AFTER he assured me that he didn’t mind if I went to my class and that he would stay home and behave.  Yeah, right.  Serves him right.  Even so, it was a bit heartless of me to comment that at least he didn’t injure anything important when he hit his head.

I do find it disturbing, and he should too, that a grown man of his advanced age (53) would engage in behaviors that lead to falling.  The last thing I need is for him to break a hip or something- although that would really cut down on the forays to the hell-hole.  For some reason, the book Misery by Stephen King comes to mind, although Jerry is not a famous author, and I wouldn’t even want to pretend to be a nurse, psychotic or otherwise.

The only thing that sort of concerns me is that he might try to blame me.  Then again I don’t think he’s old enough to claim elder abuse- yet.

I thought Jerry sort of learned his lesson about getting shitfaced at the hell-hole two years ago January when he pissed himself and  then passed out in the men’s room.  Where was Steve-o with his black Sharpie marker to write the word PENIS in reverse on Jerry’s forehead? Maybe waking up to being branded as a PENIS the following morning would have amplified the instructional effect.  I am a big believer in personal responsibility, and the instructional value of natural consequences, but I still have a bit of a moral/ethical problem with liquor-serving establishments who have no common sense regarding when to cut people off.  Jerry blows more money on pull-off tickets when he’s plastered, so they keep on serving him no matter how loud or obnoxious he gets.  That is my main beef with the hell-hole in general, that they take undue advantage of the drunk and stupid.  In spite of the ethical bankruptcy of the bar staff, there was some semblance of human compassion in the hell-hole that night.  Apparently someone noticed Jerry’s bar stool was getting cold, so a couple of guys had enough decency to retrieve his pickled carcass from the men’s, toss him in the back of their truck, drop him off on the front porch, and ring the bell.  Before I could get to the door to drag Jerry in, they were peeling out of the driveway.  I think they were driving an older, distressed F-150, but it was hard to tell because they were so gung-ho to get out of Dodge.  I don’t blame them.

I am thankful they did ring the bell and wake the dogs up- the bell generally won’t wake me up, few things do at 1AM, but the dogs will-  instead of just leaving Jerry on the front porch to die of hypothermia, frozen to the concrete in a puddle of his own pee.  It was only about 15 degrees (F) that night, so I think hypothermia would have come upon him rather quickly had I not dragged him in.  At least there’s linoleum in the foyer and in the kitchen.  That way I only had to mop the foyer and the kitchen floor instead of having to drag out the rug cleaner again.  There’s one for 1,000 Ways to Die.  Here’s your Darwin Award!

I’ve always believed the Lord has a soft spot for stupid people and drunks, which might explain why there are so many of both. 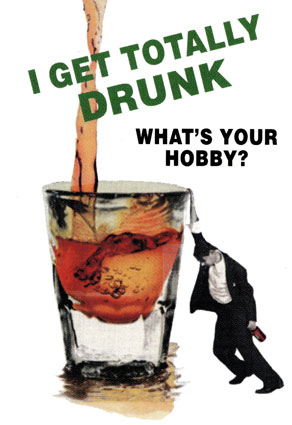 I try to be compassionate, but I don’t have a whole lot of compassion to begin with.  I am not a naturally warm and fuzzy person.  I’m not terribly forgiving by nature either, so it really vexes me to see someone keep on doing the same stupid shit over and over ad nauseam.

I’d like to think that I hold myself to a higher standard than I hold others.  I usually overlook character flaws or lapses of judgment coming from others that I would not tolerate coming from me.  I don’t like to criticize others until and unless they come to the point of being incorrigible, or just downright stupid.  Drinking to shitfacedness is stupid.  It should have lost its charm for Jerry years ago, but he still hasn’t learned.

I have never bought the hoo-hah that being a drunk is a “disease.”  Cigarettes are far more addicting than alcohol (I stopped binge drinking with relative ease- but the cigarettes…that was quite another ordeal entirely) yet no one is going around calling smokers “Smokeaholics” and granting them “disease” status.   You decide to drink or not, that’s all there is to it.  I think the big difference between drinkers and smokers is that non-smokers absolutely can’t stand the smell of the smoke- so they bitch- and since there are more non-smokers than smokers, the non-smokers usually get their way. (hooray!)  Then again, I’m having a really hard time cleaning up after Mr. Happy Hour when he deposits his beer cans here there and everywhere, and when he loses control of his bladder.  It’s somewhat funny when you’re a college kid, but when you’re almost old enough to qualify for Taco Tuesday, it really loses its charm. 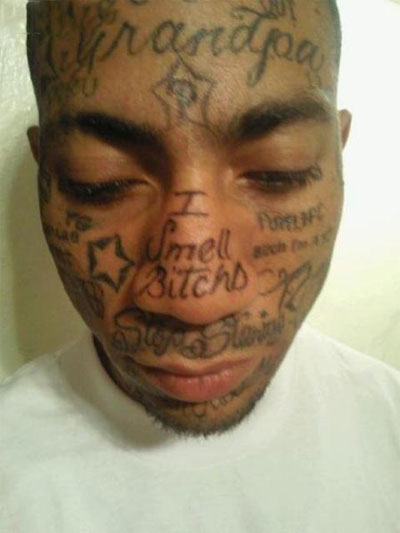 Maybe I’ll have to work him over with the Sharpie marker myself the next time he gets shitfaced and stupid.  That would be funny as hell. 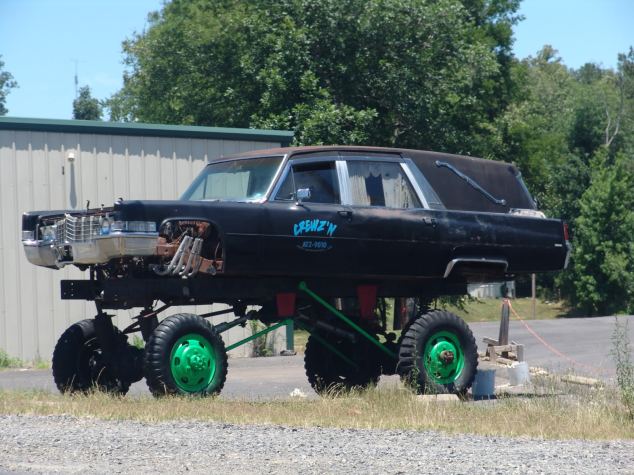 The only thing worse than a monster truck hearse would have to be the mini-van-as-hearse which sort of strikes me as being cheap.  I really don’t want to make my last trip in a modified Grand Caravan. 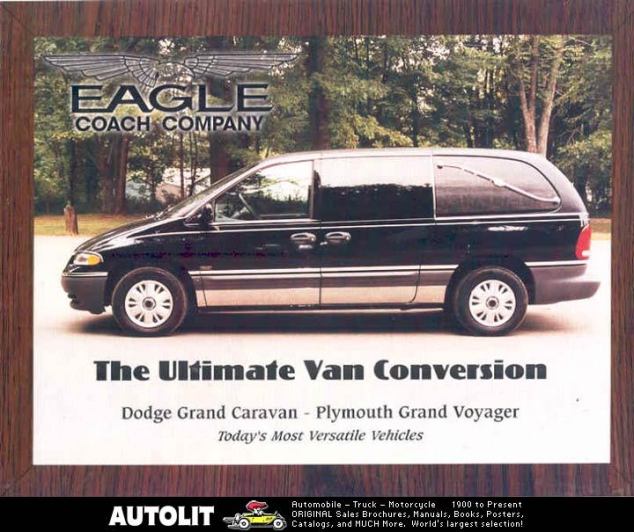 Something about this van just screams, “LAME!”   Please don’t take me on my first leg of my journey to the Great Beyond in a Mom van. Especially a Grand Caravan- a vehicle noted for having a top speed of 45MPH going downhill in a windstorm.  If that’s how life after death starts out, then I can envision heaven not as a mansion with many rooms, but as the Motel 6.  I know they leave the light on for you, but I was sort of hoping eternity might prove to be a bit more exciting than free HBO and a continental breakfast.    If I were into pomp and circumstance surrounding funerals- and I doubt if the two or three people who make it to my funeral will really care- but if I were there to enjoy the festivities, I’d want a really classy hearse, and nothing says classy quite like the old Caddys: 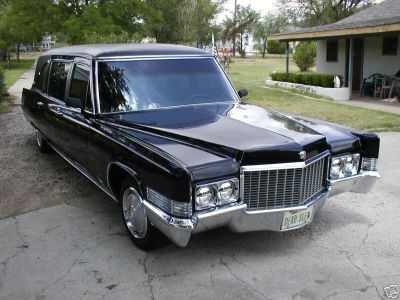 That’s my idea of a hearse. One of those would have been great for transporting band equipment back in the day too, but a ’70 Caddy like the one pictured above would have been equipped with either a 472 or 500 cubic inch V8 engine. That would be either 7.7 or 8.2 liters, if you think about engine displacement in liters like I do.  In the world of imports engine displacement is always measured in liters, and automotive (even the domestics, since about 1980 or so) uses metric measurements in general, so you get used to it.  I can see why. It’s sort of lame to think the displacement of your car’s engine is 92 cubic inches, when 1.5 liters sounds better in a  strange sort of way.   The old Caddy with either of those behemoth V8s (and a horrendously inefficient four barrel carburetor- no fuel injection back then!) would have sucked up tons of gasoline, on top of being rather pricey to maintain.  It would have looked awesome though.

Then again, since I’ve had a lot of exposure to things automotive, it would stand to reason I would want to be a bit on the dramatic/traditional side.

The Brits (God love them, because they speak English and have worse teeth than American rednecks, which is amazing in a weird sort of way in and of itself) have elevated morbid humor to an art form.  Benny Hill was known for his irreverent treatment of everything from classic literature (his spoof on Gone With the Wind is hilarious) to sex and death.  Monty Python dealt with death throughout The Meaning of Life and in the classic spot in The Quest for the Holy Grail.  Americans can do a good job at morbid humor too, (the Kentucky Fried Movie’s spoof United Appeal for the Dead is simply classic) though there’s something super silly about the way the Brits do it.

I don’t know why I have seem to have found a strange comfort surrounding the subject of death.  I remember being terrified at Girl Scout camp (now there’s an adventure- sleeping in tents and using outhouses) when we went to an old graveyard to do grave rubbings with sheets of paper and crayons.  Today I would find the old tombstones fascinating, but not then.  Most of the girls were more creeped out by the potential to encounter bugs and snakes.  I wasn’t fond of  bugs or snakes either, (especially flying insects) but at that time just the idea of  being that close to dead people really creeped me out.

Perhaps the closer we get to the grave, the more we get comfortable with the inevitability of death.

Just yesterday someone was calling looking for a recently deceased co-worker.  I didn’t talk to the person but I did overhear the conversation.  “The person who handles that is not available at the moment,” was the response.  Hell, be honest about it.  He’s out permanently. It’s true he’s not available, but the person who did talk to the inquirer should have let him know that it’s not just a matter of so-and-so being on vacation or out of the office for a bit.