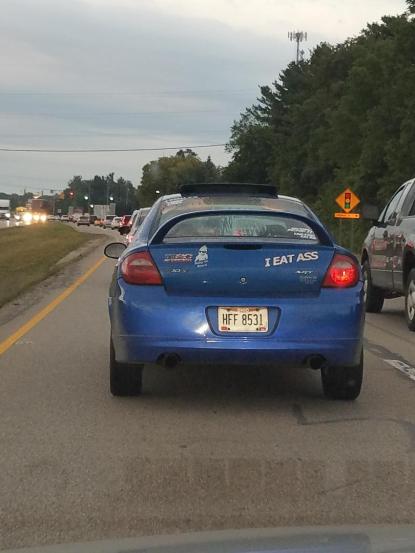 The things I see while driving to work on US23…

I have been many things in my life, but “prude” is generally not one of them.  I may be modest according to today’s standards, where apparently it’s OK for drag queens to read stories to children while wearing wigs, makeup and a little more than a strip of Saran Wrap over their bits, but I grew up in automotive shops around technicians.  Salty language and plenty of sexual innuendo, I get.  Gender bending, not so much. 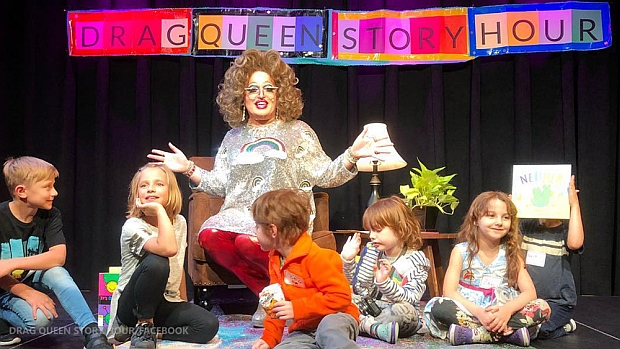 Having pervs hang out with kids…again not so much. I probably would have been terrified by Drag Queen Story Hour as a child.  I was terrified of everyone- with the exception of a precious few blood relatives- when I was a child. Then again, I could read for myself.

I sought out quiet corners of the library to read on my own at my own pace, and if anyone even thought of touching me at all, in any kind of way, I would have screamed like a banchee. It was my only defense.  The library was a safe place because it was public, (so my sisters and other kids couldn’t torment me there) quiet, and people left me alone.  As far as I was concerned when I was a child, all touching was bad touching.  I realize not all kids are hypersensitive to physical touch, but any pedophile who would have dared to try anything with me – and they probably would not have been able to get close enough- would have either slit my throat quickly, or dropped and ran quickly because there would have been blood curdling screams.

I know not everyone who likes to do drag is necessarily a perv,  but why confuse kids?  Maybe I am speaking from my own childhood, which was a hot mess to put it mildly- more like the seventh circle of hell from Dante’s Inferno to be more accurate, but I think it’s on the adults to make sure kids have some sort of reason and stability.  It would also be helpful to teach kids critical thinking and logic skills, but maybe that’s too much to ask from the Tide Pod eating generation.

As a parent, it’s not always prudent to trust your kids with other adults. I played hell trusting my son with anyone. My son made it a lot easier in some ways as he was always very outspoken and he is very good at reading people. If he was creeped out by someone then I could be confident that he was usually right.  My default is distrust.  I am not a trusting soul by any stretch.

I am glad that the hottest month of the year is behind me.  July in Ohio brings out the Scantily Clad Large People. 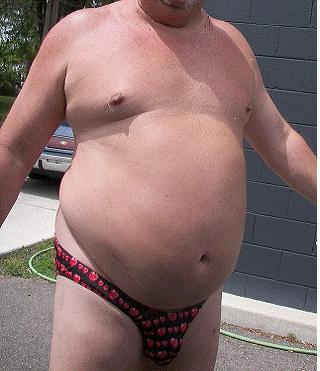 I don’t know what is worse, fat dudes in Speedos or the Daisy Duke crowd.

I have neighbors around me with pools.  It’s scary. 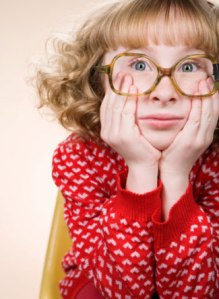 Here I sit, the ugly kid with the thick glasses and bad clothes, waiting on an ass kicking…

I absolutely loathed first grade (because I could read on the same level as a college freshman at age 5, the powers that be in the school system thought that sleeping on a mat in kindergarten might be a tad bit unnecessary for the likes of me) through high school, with the exception of my junior and senior years when I was permitted to go to college classes at OSU in the afternoons.  I think the only reason I was accorded that privilege is that by then the guidance counselors hated my guts and really didn’t want me hanging around.  What I didn’t realize back then is that I intimidated a good portion of the school faculty.  I really wasn’t an overt wise ass, but I was a little bit too good at pointing out areas that could use some improvement, and I was a rather impudent youth.  Tact is a skill that one learns with age and experience, and I didn’t have any back then.  I don’t have much now, but age brings its own gravitas, and I’ll gladly be a wise ass now, thanks.

I loathed school for two very good reasons.  First, I got the living daylights beat out of me virtually every day from ages 5 to 13.  Granted, when I wasn’t at school my sisters and their friends were administering the beatings, but school was no respite from them, and at school the dynamic of verbal abuse was added to the physical beatings.  Hell, I knew I was ugly and uncoordinated and my clothes were a disaster.  I didn’t need any reminders.  In my clothes’ defense, they were dirt cheap to begin with, and had also been through my two older sisters, so there wasn’t a snowball’s chance in hell of any of that stuff actually fitting properly even if it wasn’t threadbare and worn out.  As to me being a particularly ugly, geeky sort, there really wasn’t much helping that. 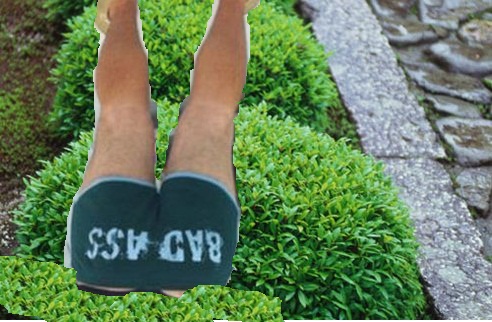 I spent way too many mornings waiting on the bell at school just like this.

Worse than landing in bushes and being dumped headfirst into trash cans on a consistent basis was the boredom.  Most of the time my classmates couldn’t get away with beating on me in class (the one exception being Mr. Titty-Titty-Titty back in 8th grade who came very close to getting his greasy paws on my chest area, but ended up breaking my best friend’s leg instead.) I had some very good teachers- most notably my 8th grade history teacher, my music theory teacher, my AP English teacher and my government teacher- but I had some abysmal ones as well, such as the biology teacher who fessed up to the entire class that he only majored in education so he could get out of Vietnam.  One of the abysmal teachers unfortunately taught American history- sort of- as in he read each chapter’s lesson out loud to the class in the same sort of monotone as Ben Stein in Ferris Bueller’s Day Off.  Thankfully I already had an interest in history (no thanks to this guy reading a very dry 20 year old textbook) so I was pretty well versed in American history before I’d ever hit this joker’s class. 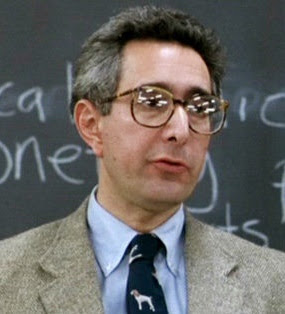 The bad part about this dude having his nose buried in a book droning on ad nauseam is that’s where his eyes were focused too.  Everyone was seated in reverse alphabetical order in that class (so he didn’t have to remember names- he just looked at his seating chart) so I sat directly in front of the same girl every day.  She happened to be a black girl who for some reason was obsessed with blonde hair.  At that time I was doing the big 8o’s hair that was so horrible to maintain.  The monthly uniperms (spiral perms with heat, which is an archaic process that went out of vogue in about 1989) not only burned up my hair and gave it the texture of straw, they also lightened it several shades, turning mousy brown to dirty blonde.  Acck, on many levels, because any blonde is not a good color for me, but this girl absolutely loved my hair for some bizarre reason and wanted hair just like mine.

One day when I’d gone back to the salon for yet another $60 uniperm, my stylist noticed that a chunk of hair had been burned off the back.  Apparently the girl in history class was not just obsessed with having straw textured blonde hair.  I thought she had tried to set my hair on fire. I found out later she did.  The sad irony is I had so much hair that I really didn’t notice. 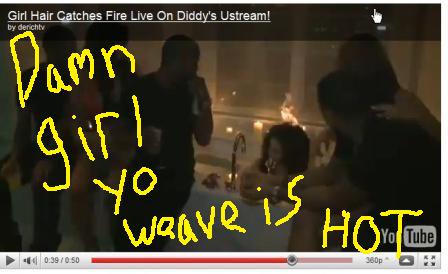 It wasn’t a weave though.  It was my actual hair.

A couple of days after the visit to the stylist, I sat down in that class, at the same desk with the same graffiti (the further back you sat the more elaborate the artwork, and my desk was only one forward from the last in the row) only to observe my friend sitting in the desk behind me with a bright red bandanna wrapped around her head like Aunt Jemima or something.  I simply asked, “Hey, Angie,*(not her real name) What happened to your hair?”

“Angie” replied, “I straightened it.  Then I blonded it.  Then it all fell out.”  The lye relaxer products the black girls used back then were some noxious stuff, and apparently they did not react well with peroxide either.  The coloring products of the 80’s were some killer harsh stuff- without preceding them with lye. 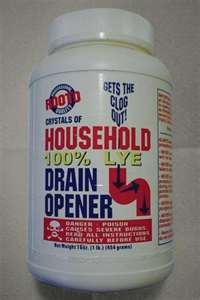 The same stuff that unclogs your drain- these girls put it on their heads.

It took six months for her hair to grow back to where she had just a slight covering of nappy fuzz on her head, but we ended up becoming good friends, even after she fessed up to burning off a chunk of my hair.  I think she was bored in that class too, although I think I did some of my best artwork ever in that class.  On that desk.  Shame on me. 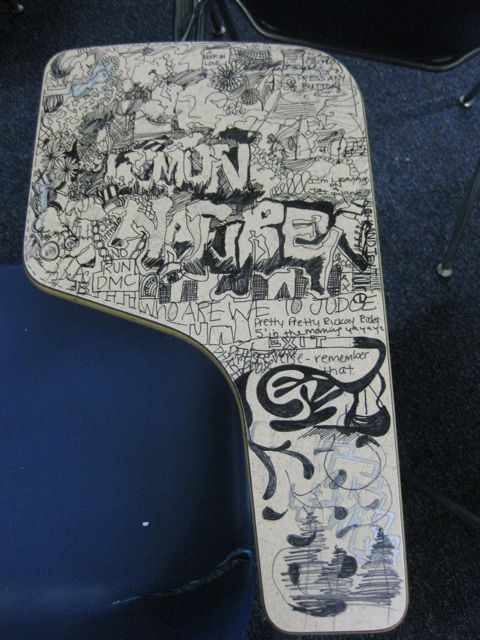 I learned more about art than I did history in that class.

Suffice to say that I don’t put much stock in traditional education.  I do believe that kids need to learn certain “boring” basics such as how to read, how to spell, basic grammar, and at least what I call basic accounting math- how to add, subtract, divide and multiply and have some understanding of percentages and ratios.   But beyond that, there is a world of information and exploration that kids generally don’t get to touch.  History is one heavily neglected area of education that can be one of the most edifying, intriguing and downright fun to explore.  Science is another, and so is the vast world of literature.  I educated myself when I was bored.  I had no problem with year-round learning.  Summer gave me plenty of time as a kid to hide out in the library and to learn on my own without having to worry about “staying behind with the rest of the class” or having to worry about what was going on behind my back.

I think if I could have done some things differently and could have spent more time with my son as he was growing up, instead of being constantly frustrated with the school systems’ bureaucracies and inefficiencies, I’d have seriously considered home-schooling, at least for awhile.  I know the isolation might not have been terribly good for his social development, but I think he would have had more fun learning.  I did quite a few stealth learning projects with him anyway.  I showed him that museums are generally quite cool and are great places to learn.  Though he does not share my passion for voracious reading, he does know how to research subjects that interest him and where to find resources he needs. 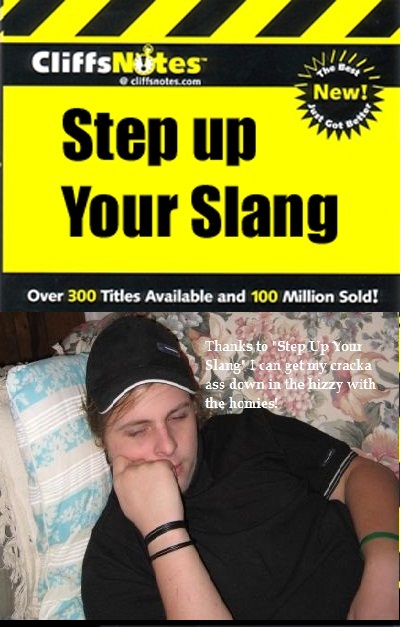 You can learn anything you want to if you know where to find it.