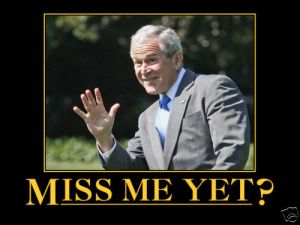 I will say up front that G.W. Bush was not my favorite American president (I would have to put Reagan and a few others ahead of him) but comparing Bush to Obama, I would take Bush any day.  At least Bush was honest, Christian, pro-life, and anti-terrorist.  Obama, on the other hand, is a pathological liar,  the origins of his religion, whatever it is, are specious at best- but if he’s been getting it from the “Rev.” Wright it sure is not Christian, we all know he is anti-life, and I’m convinced by his socialist domestic agenda and limp wristed foreign policy that he is pro-terrorist.   It also deeply offends me that ANY American president would bow down to ANY foreign leader, let alone the leaders of countries that harbor terrorists.  Humility is fine where it is appropriate, but both false humility and inappropriate deference do nothing but  show your adversaries that you are simply a boot licking tool.   That’s a telling image, and I am sure Obama is quite familiar with the taste of boot leather.  Sold to the highest bidder.

Bush’s major fault was not being conservative enough.  Obama’s major faults include that he’s a liar and a socialist demagogue.  Hitler could talk a good game too.  The difference between Obama and Hitler is that at least Hitler did build the Autobahn.   Hitler pulled off one useful project. Obama’s major accomplishments thus far include paying back his Wall Street contributors and pandering to union lackeys and other government-teat feeding parasites.   Granted, on the plus side, Obama hasn’t succeeded in ridding the world of whiteys- yet.  He’s not done stealing our money yet. If you need proof that Obama hates white people and thinks the world would be better without them,  all you need to do is read his book,  “Dreams From My Father.”  It’s an eye opener.

I’m not saying Hitler was a good guy.  On the contrary, he had some very evil goals (the Autobahn excepted) and for the most part he achieved them at least for awhile.   This makes Hitler more effective than Obama- (at least Hitler did what he said he was going to do) and admittedly Hitler was far worse, in that Hitler was actually given free rein to pull of his evil agenda.  Obama (we hope) and his evil goals should fail, at least if there are still Americans out there with a rudimentary sense of reason and a measurable pulse.

Obama has accomplished one thing in his tenure as president so far.  He has succeeded in making  Jimmy Carter look good.

The bad thing about me and political thought is that the more I think about Obama and how utterly inept and just plain wrong the guy is, it really makes me mad.  My blood pressure is hard enough to keep under control. Then again, we get the leaders we deserve and this is the collective cost of people just not paying attention.

Aside from politics, I am still waiting for my car to get done.  I did get a few more HK goodies – all weather mats, new license plate frames and new front seat covers- as well as I have my replacement protest stickers including a new “Kasich for Governor” sticker.

Steve-o finally made it back to Marion after his exam was delayed two days due to weather.  I hate winter and this winter has been particularly nasty.  There is still a foot of snow on the ground that isn’t going away anytime soon.  The dogs are doing their best to turn it all yellow, but that might take a little time.

Sometimes it torques me that Steve-o only seems to call when he wants me to do something for him or he wants money.  I guess now is a good a time as any to say NO.   NO you can’t have any more money, and if you want money you need to either get a job or sell some cars.  There, I said it.  The dude does have some pretty big balls sometimes.  I was doing good to have one car when I was in college let alone three, and I would never have even dreamed of trying to mooch money for smokes.