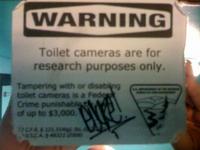 My question, and I think it a valid one, is why would anyone need to conduct any sort of  “research” involving toilet cameras?  Maintaining toilet cams sounds like more of a fetishist project to me.  “Oooh, look at that big loaf!”  Why not just check out the “Rate My Poo” site if you are so into that?  I’ve never been a big fan of Freudian psychology, but isn’t peering over toilet cams a sign that one is getting way too obsessed with matters of the eliminatory kind?

As far as public surveillance goes, it has gotten really out of hand.  Part of the reason I really despise public fitting rooms is because back in the day- say for instance at Penney’s or TwinFair or any other department store where they sold clothes- there were two-way mirrors through which some aspiring voyeur got paid to watch you try on clothes.  Ostensibly this was to prevent shoplifting, and I’m sure it did, but I really don’t like the idea of some perv (male or worse, female) getting their paycheck and their jollies by glaring at my trollish body in varying stages of undress.   Today the surveillance factor is multiplied in that mini-cameras can fit anywhere.   The camera can be transmitting pictures anywhere with Internet access, so the perv(s) monitoring it can be in Tanzania or Fiji for all I know. It’s no longer about one perv amusing him/her self in private glee at my expense, but pervs around the world with the potential to share the fun online.  One can only imagine that any public fitting room has dozens of spy cameras in strategic places where any lecher in the store’s employ can gaze, clip, save and post pics of any unfortunate in the try-on booth on their Facebook page for posterity should they so choose.  George Orwell himself couldn’t have imagined this.  I don’t need some deviant posting pics of me attempting to find a bra that actually fits, or pics of me trying on pants that either fit fine except they are six inches too short (when I try to wear “petite” sizes) or pants that fit fine except they are six inches too long (when I try to wear “regular” sizes.)   I don’t try on clothes in public.  Period.  Mom made us do that far too much when we were kids.

Mom had a philosophy about buying clothes for us.  Usually I ended up with my sisters’ old threadbare clothes- being the youngest sucks in more ways than one- but occasionally I did get something new.  I did get new socks and underwear (thankfully I didn’t have to wear their old ones) and occasionally a shirt or pair of pants now and then.  Mom’s thing was she didn’t want to waste money (or in my case usually, Grandma’s money) on clothes that didn’t fit.  So we would have to try on all the stuff that she thought would look good on us, and if it wasn’t at least five sizes too big, and available in fugly shades of green and/or brown it went back on the rack.  Mom likes to shop so this ritual was sheer torture.  Not only did you have to try on 50 different items, but you usually ended up with the three items you hated the most.  Granted, it was the 70’s and I don’t think there were that many good clothing choices then.  Even so, I hated undressing in public even more than some of her clothing choices.  To this day I do not a.) use public fitting rooms, ever, or b.) wear scratchy knit pants in hideous colors.  I tend to gravitate toward the “cool” colors, given that my skin tone was named after a Toyota paint color: “Super White.”   I have some dignity left even if I do have to occasionally hem my pant legs- or just sigh and wear capris.

All I can say is I hope Obama keeps on campaigning for Strickland.  Everyone who Obama’s supported politically since he was elected has gone down in a blaze of glory.  May the trend continue.

I hope people are waking up.