I can imagine Steve-o’s embarrassed indignation yet again at Mom as she is trying to pry into his sex life.  Steve-o is not Catholic and wasn’t raised Catholic so he really doesn’t understand that Mom learned sex-ed- from nuns.  I tried to impart to him at least a nominal Christian education in the Lutheran tradition.  Therefore the oddly Catholic concept of “sex-is-sin-except-if-you-are-married-and-actively-procreating-and-even-then-you-better-not-enjoy-it”  is not a concept that is dear to his heart.  I will add, that as in line with is correct Protestant theology, he has been taught that abstinence is the correct course of (in) action before one is married, but after marriage sex is perfectly hunky dory, and you can enjoy it without procreating, as long as it is consensual and with one’s spouse.  Of course for me, this concept of  “sex after marriage for recreational purposes” is merely a theory and not something I’ve experienced any time recently.  But I am an old cougar whose carnal drives went away pretty much completely after the hysterectomy anyway.  In contrast, Steve-o’s a 19 year old male for heaven’s sake, and there would be something wrong with him if he didn’t have a healthy case of cat scratch fever (as Ted Nugent called it.)  I was going to say “perpetual boner,” but I don’t want to imagine that.  Ever. Eww.

I would rather have Steve-o be honest with me.  I know he has been doing the dirty deed ever since Jerry caught Jezebel riding him like a pony when he was 14.  I am glad to have been spared the visual, and no I don’t approve of it.  However I am a realist, and I know that I didn’t practice abstinence until I was married.   If  lust is a difficult thing for women to resist, (and I struggled with it for many years, and still do in some ways) I know men in their impulsiveness have it a lot worse.  It’s a high standard, and even if I expect him to uphold the abstinence standard, I would rather he trust me enough to be honest with me if he doesn’t.  I understand.  Really.

Mom on the other hand does a very good impression of the Spanish Inquisition, which is what she did to him the other night of her own admission.  I know she means well because she fears for the state of Steve-o’s soul, (and I think Catholics still regard fornication as a mortal sin) but the Inquisitional method isn’t going to work with him.  The old-school Catholic guilt complex doesn’t register with him.  He was never taught to be terrified of dying with unconfessed sins, and I don’t think he’s even heard of the concept of mortal sin.  I wasn’t about to tell her what I know about Steve-o’s amours and break Steve-o’s confidence. I know that she more or less browbeat and cornered him into a sheepish denial, a denial arrived at specifically to appease her and to avoid her wrath.  I don’t think she really wanted the truth anyway.  Sometimes the truth is exactly what you don’t want to hear.  He told her what she wants to hear to avoid her inevitable diatribe about fornication and mortal sin and how the “pecker leads the way down the path to perdition.”  I think she learned that speech from the nuns way back in 1960 and can still quote it verbatim. While as I said earlier, I don’t approve of what is technically fornication, and in my own life transgressions of that nature have caused me a great deal of regret and heartache.  God put the boundaries around our behavior for a reason, and when we cross those boundaries there are consequences.  Even so, I can think of much more harmful offenses.  In spite of my Catholic upbringing, I find it hard to believe that sex is the unforgivable sin.  I know that sin doesn’t have categories and one is as bad as another and we are all guilty.  I am not the one Steve-o or anyone else will have to answer to.  We can sound the warnings but ultimately each one of us is going to make mistakes and each one has to live with the consequences of those mistakes.

I have to find some humor in the fact that I got the same Inquisition from Mom, years ago, and I pretty much reacted the same way.  I was the Queen of Denial (he-he.)  My sister was nominally less fortunate, as she got the Inquisition after Mom found her birth control pills.  That was not a pretty scene.

I think my generation views things carnal in a different light than Mom’s generation.  While technically she and Dad are “boomers” (came of age in the 1960’s) one has to remember they grew up in a town that is chronically 20 years behind the rest of the world.  The 1960’s for them meant 1940’s social mores, not hippies or Woodstock or free love.  My generation was into the whole “love the one you’re with” thing- at least until the advent of AIDS.  Then we started getting picky.  When I was in high school it was not uncommon for girls to get pregnant and not even know who fathered the child.  When Mom and Dad were in high school if a girl got pregnant either she was Sent Away to have the baby and then give it up for adoption, or forced into a shotgun wedding at age 16.  Neither of these scenarios are good, and both of them underscore the fact that behavior has consequences.  Waiting is better but waiting isn’t easy- especially when you’re 18 or 19 and a month seems like an eternity.  All I can say is time moves faster the older you get.

Today is election day and it is long awaited for those of us who abhor Obama and his dreadful administration.  I hope for a few things.  One, that the stupid people stay home.  Two, that we here in Ohio get a new Governor, and three, that enough Republicans make it into Congress to stop the Obamanation in his tracks.  I have never loathed an American President this much.  Carter was terrible- I remember writing him letters as a nine year old kid pleading with him to do something about the coal strikes and the hostage situation in Iran- but Carter at least had some humility if not sensible ideology.  Obama has abhorrent ideology as well as he is an arrogant fool.  May he please be a one term president!!! 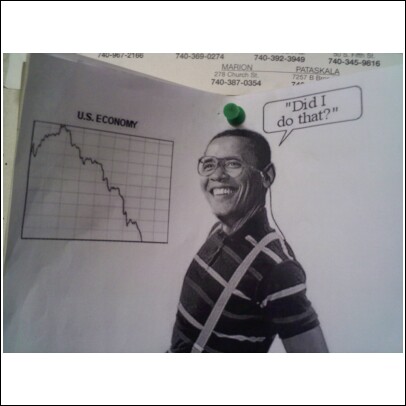