Maybe I’m the only one who sees the humor in this.  My thought is: Is the soup ostensibly a cure for E.D., or is it something designed to cause it?  Is there salt peter in it?  I know E.D. is no laughing matter- it can be rather pathetic, especially if you’re a woman consigned to involuntary celibacy because of it.  Of course, the poor guy at the Chinese joint (who is from China, and English is not his first language) probably had no idea “E.D.” is a common abbreviation for “erectile dysfunction.”  He used E.D. as an abbreviation for “egg drop.”

I love Chinese food and Chinese restaurants but I never really had much of a taste for egg drop soup- generally I prefer wonton or occasionally hot and sour.  This order of egg drop soup was for one of the guys I work with.  I am not going to ask him if his soup order affected his love life in any way.  That would be TMI.  There are some things I really don’t care to know.

Now I remember what I forgot to get at Sally’s- Face Nair.  I do have that handy $5 off coupon I got for renewing my card which will cover most of it.  I buy plenty of stuff at Sally’s- more than enough to justify having the discount card.  They are the only ones who have the fiberglass nail wraps and acrylic resin I use on my nails.  I hate the powdered crap (it doesn’t work) but the liquid acrylic resin with the spray hardener is the way to go.  It’s similar to the stuff used in auto body repair.  Go figure.

Just thinking about Jerry’s most disturbing inadequacy is depressing.  I can forgive the drunkenness, slovenliness (even right after his tirade of a few minutes ago, when he was bitching because I had not cleaned his mess up in a more timely manner, and the tirade that directly followed the “you need to clean up my mess- again- tirade,” when he bitched about how he didn’t like how I listed his crap on Craig’s List,) and his downright lack of anything resembling consideration or manners, but I find his unwillingness to address his E.D. the worst of all his flaws.  I know he was raised by wolves and that explains a lot of his ignorance and rudeness.  But one would think a normal man would actually care whether or not Willie works, and  I would presume a normal man with a limp willie would do something about it.  I am surprised his Dad hasn’t told him to soak it in kerosene (apparently this is an old time Appalachian hemorrhoid cure) but I doubt that he and his Dad have had a man-to-man about his malfunctioning member.

I’m learning to tune out the bitching.  I even have noise canceling headphones so that I can drown out the oat opera torture sessions.  I don’t have a reasonable substitute for a real man though, and that bothers me sometimes.  In fact, it bothers me a lot of the time.  So much so that it requires me to (vehemently at times) resist the temptation to reconnect with a certain old friend.  As much as I would love to rekindle communication with this particular old friend, I don’t trust myself.  There is too much potential there for me to cross boundaries it would be wrong for me to cross. Suffice to say if times and places and circumstances had been different-there could have been something wonderful there- but if my aunt had balls, she’d be my uncle.  Some things simply weren’t meant to be, and I am enough of a realist to know better than to ruminate on impossibilities.

Color me old-fashioned, but I am not the “friends with benefits” type.  I can’t say that I am a terribly emotional person, but even the rational side of me has a hard time making the disconnect between physical contact and emotional attachment.    I have a hard time with any sort of physical contact with people anyway- even men I find to be attractive.  I generally don’t like to be touched even in the most innocuous ways.  I even hate having my hair cut because I don’t like people touching my hair.  I do my own nails partially out of poverty and partially because it is weird for me to let people touch my hands.  Even if I had the emotional connection I would need to even want to get physical with a man,  I can’t live with the guilt and I’m not into those kind of games.

There are days I really want to knock Jerry on his ass but then I’m probably not the easiest person to live with either.  I try to be quiet and stay out of the way for the most part.  It’s safer that way. 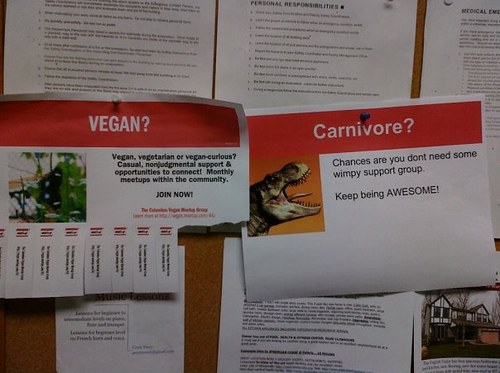 I can’t help it.  This is funny.  I know there are those who will claim that humans can do just fine on a vegan diet.  Perhaps this is true, and more power to the vegans and vegetarians out there.  But I like meat.  I also find it ironic that vegans would keep cats (and many do) knowing that cats are obligatory carnivores.  Cats will die without meat products in their diets.

I can eat meat…but…never mind.  It’s not nice. I’m trying to keep my mind out of the gutter, and my heart from despair.

Maybe someone will get me something on my birthday list.  Even the 12 pack of Diet Dr. Pepper would be nice.  Or a new vacuum cleaner that actually sucks and that still has wheels on it.  The vacuum cleaner, the one thing that is supposed to suck- doesn’t suck very well unless I constantly empty the dirt box and unclog the dog hair from the intake.

The vacuum cleaner sucks more when it doesn’t suck.  What irony.

If beating my rugs would get the dog hair out of them, I’d try it.