Steve-o can partially be excused for his puerile behavior due to his age.  When you’re a 19 year old kid it’s funny to flip off the camera and moon people, especially blood relatives.  I don’t have too much problem with it when it’s all in fun.

But when you’re almost 54 and still partying like it’s 1975, it’s time to get a clue.  It’s not funny any more when you’re of the Geritol set but still think you can drink a twelve pack a night and blare the stereo.  Yes I have the noise canceling headphones and have been enjoying some 80’s Robert Plant, REM, Journey and other aesthetically pleasing music.  Otherwise I’d have to throttle the old goat.

I know Jerry was raised by wolves (my in-laws came from deep in the hollers of rural WV and have about a fourth grade education between them) and I am no authority on Appalachian culture or the lack thereof, but come on.  Just because your parents grew up having to share a double bed with sixteen of their siblings and/or cousins (let’s hope that there was a bit of diversity in that gene pool) does not mean you necessarily have to become a crude and rude beer swilling, loud music blaring deviant.

I tried to be a good mother.  I know, I failed.  But Steve-o does have an expansive vocabulary when he chooses to communicate with verbal or written language instead of the extended middle finger.  I did something right, I think.

Today I heard a wonderful little axiom that was music to my ears, especially when everyone is so overloaded with so much politically correct touchy-feely mind-numbing swill these days.

How to Avoid Criticism:

Dad’s bit of wisdom on these lines is a similar sentiment, though a bit more pragmatic.

Well, let’s see.  I get a lot of criticism so I must be saying and doing something.  I screw up a lot too, so if nothing else, I’m busy. 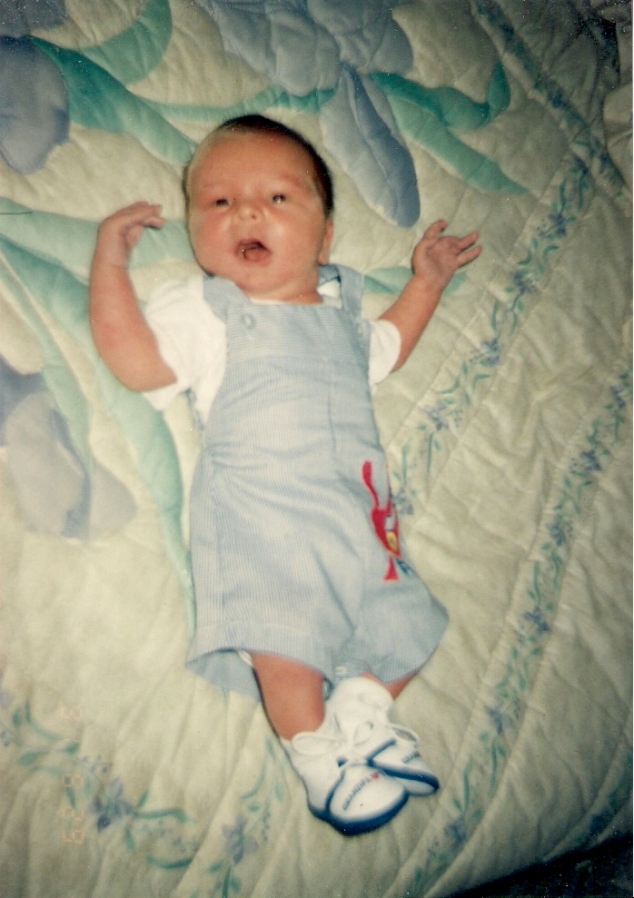 This is a pic of Steve-o when he was a week old.  He weighed over 10# and looked like he was at least three months old.  That was the first and last time he ever wore that outfit.  A word to the wise- when buying baby shower gifts, a few people should bypass the newborn to 12 month sizes (this was a six month outfit and he only fit into it once) and get some of the larger sizes in case the poor woman gives birth to a behemoth child who will never wear newborn sizes.  Just a thought.

Oh, can I wring his fool drunken neck yet…pass out already I’d like to go to bed.

One thought on “Raised by Wolves, Culture Shock, and How to Avoid Criticism”