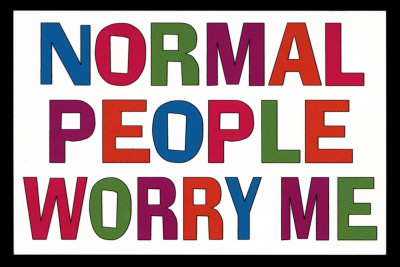 I never really liked the word “normal,” because “normal” is a most subjective word.  What is normal for me is probably not normal for most other people, and vice-versa.  That’s OK, because I’m comfortable with the way I’m wired, and I can navigate with it pretty well.   The problem for me is that the rest of the world isn’t wired the same way, so I have to modify my methods and approach accordingly in my interactions with the rest of humanity.  My peculiar wiring gives me some advantages (for instance, for me, speed-reading has always been a mechanism that is both automatic and near and dear to my heart) but my wiring also gives me disadvantages when the only route I’ve been given is not the well-traveled road.   I see much that others miss, but I miss much that others see.  I miss the subtle cues of facial expression and body language that most people cue in on automatically.  I have to make a conscious effort not only to read non-verbals, but also to be sure that I’m sending the right non-verbals, both of which are vexing for me.  I’d much rather communicate in print so I can revise as necessary and say what I mean to say.  I also have to make a conscious effort to do anything requiring gross motor skills.  I didn’t learn to ride a bike until I was almost 8 years old, and in spite of intense physical therapy when I was 3-4 years old, and my mother’s misguided attempt to force me into ballet lessons a few years later, (too bad they didn’t have video cameras then, because my abysmal attempts at ballet dancing would have been a hoot to watch) I’m still doing good to walk without falling.

A better term for “normal” in my world would be “neurotypical”- meaning the vast majority of humanity, i.e. people who can walk across a room without tripping on their own feet, and whose perception is not perennially “cranked up to 11.”   Neurotypical people have to learn to read the written word the hard way (something I still don’t understand, because I can’t remember a time in my life when I couldn’t read) but for the most part they automatically pick up on empathy and relating to others, while I have to consciously develop and practice those skills- the hard way.  I also have to train myself to narrow my focus, otherwise I would be kept awake by a star’s reflection in my window or by the whistle of a far off train.  The danger in this is if I turn down the perception knob too much or hone in on one tiny spot for too long I truly do shut off the rest of the world.  One of my greatest talents is the ability to ignore. I have to consciously keep a balance between the two extremes.   I can go from near-catatonia to panic attack in a heartbeat if I fail to keep the “need to shut down” and “need to experience everything” parts of my mind balanced.

I have suspected for a long time that I have Asperger’s Syndrome- the description of Asperger’s explains much about my rather “abnormal” intellectual and social development.  I understand how easy it is to simply shut down.  It’s hard for me to describe, but I can see both how and why autistic people do shut down.  It’s easier than the constant fight to maintain the balance, and it beats panic attacks and/or manic rages.  Leave me alone in the ivory tower, because it’s a lot easier that way.  Yes, that I most certainly understand.

I remember all too well Mom used to backhand me for “being rude” or “staring” when I couldn’t see what was wrong with a.) stating the obvious, or b.) making an observation.  Then again I may have had some advantages in such a harsh upbringing.  Mom was a big believer in operant conditioning, and more specifically the negative reinforcement component of operant conditioning.  She would backhand you for a dirty look, or for missing a response whilst doing the Catholic calesthenics during Mass.  In her economy one’s behavior better be appropriate at all times, and to flying hell with any reason you might provide for behavior she deemed inappropriate.   My sisters had a different MO for beating the hell out of me, (unless they could beat me and make me scream so Mom would also beat me- for screaming) and they beat me a LOT more often than Mom ever needed to.  They beat the hell out of me because I was an easy target and it was something to do when Mom locked us outside and cranked up the volume on the TV.  Who knew sadism could be so entertaining?  Today they have video games for that, but not back in the 70’s.

In my opinion, “telling it like it is,” is simply being honest.  You can be honest and tactful, but tact is an acquired skill, and not necessarily one that I excel in.  I acquired a good measure of tact with the quickness when I was about five- after I commented that one of Dad’s friends was getting really fat. Gotta love that operant conditioning. You will shut up after being backhanded into next week- but it didn’t change the fact that Dad’s buddy was getting downright lardy.  One of the nice things about cougardom is that I don’t have to be as tactful as I was required to be when I was five.  Age buys one at least a slight bit of gravitas in some ways.  I can call a lard ass a lard ass and get away with it, though if I must comment on someone’s superfluous girth, I generally just say “large” and move on.  I’m not consciously trying to be rude, but I do call it as I see it.  I can make commentary as much as I want to at my age without having to be as paranoid about offending people.

One of the reasons I really hate political correctness is that it gives people excuses to be wussies.  I was never allowed to simply follow the path of least resistance and shut myself down to the point of being cloistered away in a padded room with a stack of adult diapers (though I think I would actually have to leave my little private enclave to at least use the toilet and bathe) and vast selection of reading material.  No one catered to me.  I had to adjust to everyone else and if I didn’t like it, it was tough titty.  I was held to a higher standard because of my IQ scores, with no mercy or accommodation for my motor deficits or emotional and social deficits.  My family forced me to be social and to function in the neurotypical world whether I wanted to or not.  I was not given the choice to withdraw from human interaction.  The best metaphor I can think of is that I was thrown in the pool and left to sink or swim.  No water wings, no instruction, no floatie for me.  Use what you have and figure it out.  I probably could have done without all the beatings and likely the attempts at ballet lessons too, but for the most part I don’t think that I would have the ability to function in the “normal” world today had I not been forced to do so. Sadly, today no one has the audacity to require kids to adjust and to learn how to navigate the world with the wiring they’ve been given.

Granted, I am probably not an exemplary picture of mental health.  I freely admit I have Issues.  Then again, had I not been thrown into the fire I can guarantee my Issues would be far more profound and limiting. 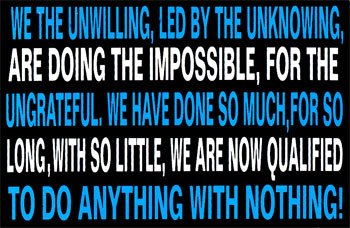 So, just shut up and make it work.  That’s what has to be done sometimes.