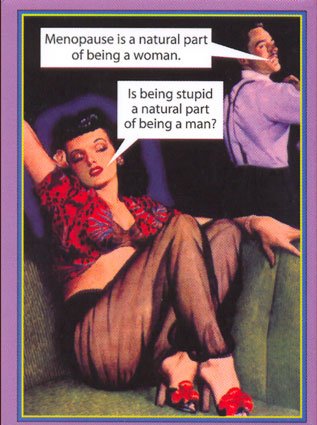 I love being “middle-aged,”  or as I put it, in my cougardom.  There.  I said it.  Why am I so excited about life, knowing that at least half of it is over? In a lot of things I am one of those people who see the glass as being half-empty, but as far as the rest of my life goes, the glass is half-full.  I’m not getting my ass kicked on a daily basis, I’m not driving a shitty car,  and nobody calls me to locate my sisters.  I can look at hot younger men with impunity, and without fear of having some uncouth redneck wench spit Skoal in my hair.  Cougar life is good.

The number one advantage of being in the cougar set is that no one really cares what you wear as long as you cover the important stuff.  I don’t have a problem with coverage, because we have laws in this country against cruel and unusual punishment (yes, I have actually read the Constitution, unlike some of those currently holding elected offices.)   It would be cruel and unusual punishment to make anyone observe me in: a bikini, a mini-skirt, the nude, or in any other state of not-so-decent dress.  So I make sure all the important (i.e. stuff nobody wants to see) stuff is well-covered.  I can accept my frumpiness and run with it, with the delicious knowledge that many of the “beautiful people” I went to school with are twice my weight, with tanning-bed leathery skin.  I don’t look good and never did, but I look better than some people who used to look good.  Why that appeals to my sorry sense of vanity I will never know, but it does.  Shame on me.  My mother would drag me to Confession- were I still Catholic- for such an egregious sin.

There were a few girls I went to school with who managed to remain “beautiful people,” such as the Hall Twins, who are painfully identical (with identical bleach-blonde hair and usually identical clothes too) and have not changed one bit in appearance since 1984.  I have to wonder if they are either wax models or if they have been freeze dried or something.   There were a few really fugly people who managed to either lose weight or get their teeth fixed or have plastic surgery who are now “beautiful people,” but most of us are at right about the same level of “definitely not beautiful, but not exactly fugly.”  Entropy eventually wins out.  Gravity does too, which I am reminded of every time I take off my bra.

Now I know why Grandma preferred the long-line bras.  Unfortunately, I am unable to breathe while wearing one of these.

The other advantage of cougardom is one I noted many years ago whilst observing my grandmother and great-grandmother.  Not only did they wear bright colors and bold patterns, they also spoke their minds- loudly, consistently, and with no regard for political correctness.  I loved taking them shopping if only to see just how mortified Mom was at their commentary.  I learned that descriptives such as, “whore,” “floozy,” and “lard ass” must have been around a long time- and that according to both my grandmother and great-grandmother, such individuals can be found everywhere.

It’s shocking when a twenty something is caught drooling over some fine young stud, but it’s somehow charming- or at least funny- when some old bitty does the very same thing.  I’m not dead and I’m not blind- so I’m going to look.  I may not comment like they did (and both of them seemed to enjoy the 80’s trend in tight jeans for men, which I wish would come back in style) but I’m still looking.

Some things in life are constant, such as my disdain for the local Walmart. It’s not so much a dislike of the store itself but of its Team Members, who are anything but a team.  Any place that calls its employees team members, associates, etc. rather than employees, is almost always a shitty place to work.  It seems to me that when an organization has to come up with fancy titles for its employees that they are trying to make them feel good about working a shitty job in an abysmal place.  Any place that makes its employees wear name tags is also almost always a really shitty place to work.  Walmart- at least the one I’m talking about down the road- is either a really shitty place to work, and/or they just can’t seem to come up with the hazard pay that sentient humans would require to work amongst the unwashed, illiterate and uncivilized masses that frequent this place.   The Team Members I’ve encountered in this particular Walmart are surly, largely unable to speak or understand the English language, and seem to resent my very presence.

I did, however, need to find myself a jug of Pennzoil so I can get my oil changed.  Yes, I know brand loyalty is largely folly, but there are two brands I don’t waver on- Toyota is one, and Pennzoil is the other.  I’ve used Pennzoil in all of my vehicles, and have never in over a million miles driven in them have I had engine failure of any kind in any of them.   So I continue to use it, whether it really makes a difference or not. I think in the grand scheme of things changing the oil regularly matters more than what kind you use, but I’m not taking any chances.

Target isn’t open at 6AM, and I didn’t want to have to go into any store after work, so I figured I’d venture in to the Walmart before the crackheads and serial killers wake up.  I forgot that the Team Members at Walmart are every bit as deranged as their usual clientele.

All I can say is, if you’re going to have the doors open 24/7, you’d better have at least one farking register open, even if it is 6AM.  When someone finally did locate a cashier (once I located someone who could understand rudimentary English,) I had been wandering around the Walmart for 20 minutes.  The cashier seemed to be quite pissed off about having to get off her ass and deal with me, but I smiled and kept my commentary to myself.  The only mitigating factor in this transaction is I paid $15.99 for a five quart jug of Pennzoil 5W30 that I normally pay $22.99 for, so I guess I get the shitty service discount.

The pisser is it costs me more to buy 4 quarts in quart bottles than it does to buy 5 quarts in the 5 quart jug.  I only need 4 quarts.  It’s a freaking Yaris, OK? 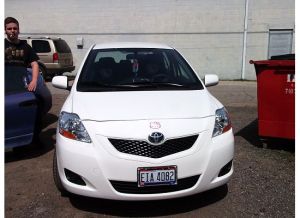 Laugh if you must, but 40MPG on the highway (NOT a hybrid) is nothing to scoff at!

One thought on “The Cold Comforts of Cougardom, and a Kingdom for a Jug of Pennzoil”