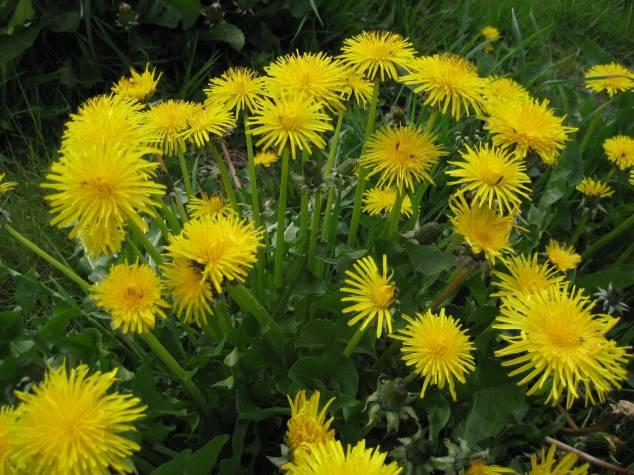 Ah, dandelion season.  I don’t mind them (unless they are adding to my current allergic-to-all-those-things-out-in-nature that I can neither eliminate nor control nightmare hell), at least not from an aesthetic viewpoint.  I think they’re nature’s way of giving the big old one finger salute to the guys out there who are completely obsessed with the lawn.  You know who you are.  Golfers too.  I can relate to George Carlin’s opinion of golfers and golf courses.

Three years of being a manager at an Infiniti dealership taught me all I ever wanted to know about golfers.  (Columbus, OH- Muirfield- the damned Memorial Tournament…every farking year…) By and large, the golfers I’ve had the bad luck to encounter were pompous bastards who spend a shitload of money on their golf stuff, but can’t seem to come off of the cash to maintain their luxury car, AND who also have the stones to whine and bitch and demand free shit from the dealer when said luxury car breaks down due to lack of maintenance.   I have absolutely no sympathy for some tool who buys a high dollar car and then has the audacity to throw a fit when they discover that the maintenance and repair of said luxury car costs three times as much as it did for the Corolla he traded in.  Dipshit.  Research it before you buy the high faluting ride with the V8 turbo, the tires that cost $1500 each, and the very sensitive electronic systems, you dingleberry. Drive like a sport, pay like a sport (wonder why I drive a Yaris?) and shut up.  Junior might have to skip a lacrosse lesson or two, or you might just have to suck it up and drink Natties instead of Anchor Steam for awhile.  Or just forget about the luxury ride altogether and save yourself both the prestige- and the expense.  Here’s how this ‘po woman spells Lexus- T-O-Y-O-T-A.  Just as reliable at less than half the cost, although I do forgo the V8 turbo, and the ass warmers in the seats.

I guess golf keeps aging, balding, wanna-be-somebody yuppie types out of the brothels.  Or maybe not, if you’re talking about Tiger Woods.  I’m glad Jerry can’t afford to golf.  Gambling and drinking are bad enough.  Let’s not add social diseases or fashion violations. 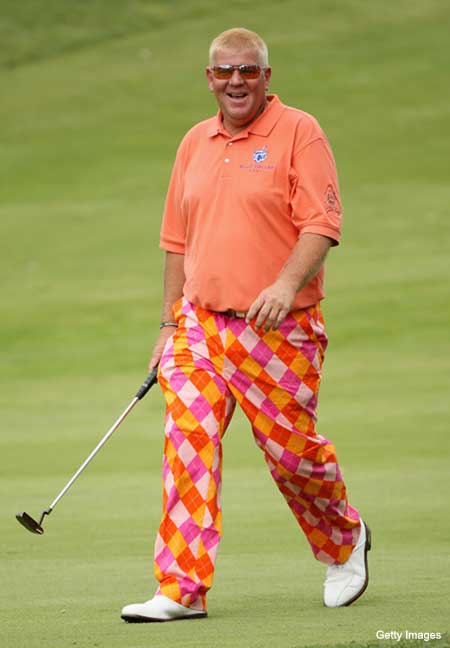 Everyone needs a hobby.  I like to do cross stitch and play games on the DS when I get a chance.  I’m low maintenance.  Jerry is very high maintenance, and he’s hyper and paranoid to boot.   He needs a hobby that tires him out and involves some sweating and getting dirty.  I don’t mind if he goes fishing (as long as I am not dragged along) or if he gets into picking dandelions out of the yard by hand.   I am grateful he can’t dress bad enough to be a golfer, and he’s too much of a redneck to give up his truck.

I know it’s not nice but every time I see Jerry traipsing about out front with that chemical sprayer hoochie spraying each and every visible dandelion I visualize a few different scenarios and none of them are pretty.  The first visual that comes to mind is Dale from King of the Hill. 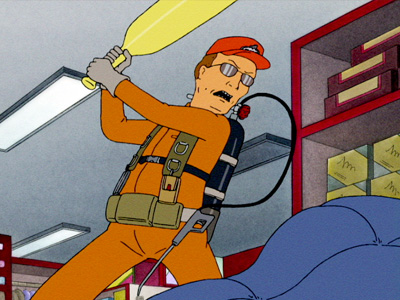 Jerry shares more in common with the fictional Dale Gribble than I would like to admit.

I mean, Jerry drinks a lot of beer and smokes a lot of smokes.  He likes to spray chemicals at weeds.  He’s also paranoid like that too- thinking that the government has cameras on him and such.  I know the cops like to camp out in the Wonder outlet across the street and sit and watch Jerry when he’s crushing cans and drinking beer in the garage.  Apparently, local law enforcement is easily entertained.  I’m sure they’ve observed his mowing-while-somewhat-inebriated with a certain degree of…probably not concern…amusement, more likely.  I don’t think the state of Ohio has come up with any sort of statute concerning the legality of drunken mowing on a push mower- yet.  I would think “public intoxication” would cover it, but I’d have to assume that since the cops only observe from afar (and get some priceless video on the dash cam for later enjoyment no doubt,) that drunken mowing must still be OK as long as you’re not on a rider mower. 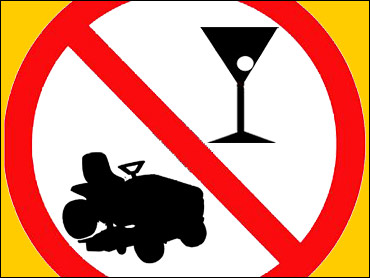