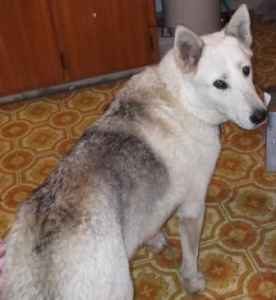 Sheena is to canine intelligence as Larry, Moe and Curly are to rocket science.

Suffice to say that I am an incorrigible dog lover, and I regard my dogs in higher esteem than a lot of people I know.  That doesn’t speak well for a good portion of humanity, though it does speak well for dogs.  Even when I was a little kid I could get along with dogs just fine but I had a lot harder time dealing with the little bastards that used to chase me down and beat the hell out of me.   When the neighborhood kids used to chase me, if I could make it there in time, and I could climb the fence fast enough, I would hide out in the neighbor’s Rottie’s run.  The only thing I had to worry about from Rex (the Rottie) was being slobbered on and maybe a flea bite or two.   He was probably a 120# dog, and he scared the living bejeezus out of most of the kids, but I could sit down on the ground with him and play with him.  He had a big, thick rope with knots on the end in his run and he loved a good game of tug.  Sometimes he would let me win.

Dad caught me hiding out in the dog run one day and just about flipped out.  Rex didn’t like Dad too much, but I could do anything with him (Rex, that is.) 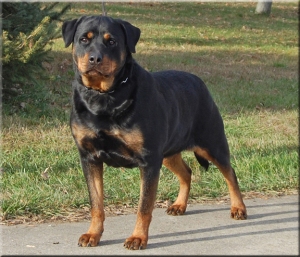 While Rottweilers look formidable, most Rotties are slobbery big babies- as long as you’re not intimidated by them, that is.

Sheena is a genuine charity case though.   She has Issues.   However, like Rex the Rottie, she’s large (75#) and looks intimidating (the kids in the Drunk & Domestic apartments behind the body shop think she’s a wolf, which is fine with me) but Sheena is not a dog I would consider to be a threat.   She generally regards humans as non-threatening, and she is all about making friends and getting food.  Even though Sheena is generally a dog I would put in the “harmless” category, I have to quantify the danger factor when I talk about dogs.  Their taxonomic name: canis lupus familiaris (= “house wolf”) says it all.  Domestic dogs- with all their variations in size, color, coat and demeanor- are merely a subspecies of the grey wolf (canis lupus lupus) and even after 15,000 years of domestication, we forget this fact to our peril.  Even the most non-threatening dog can be dangerous or even deadly given the right situation- but Sheena is a dog I would consider to be a very low risk to humans.

Sheena has nubbins for canine teeth and her incisors are worn to the bone from cage biting.  Her previous slack-jaw redneck idiot owners kept her in a 6X6 chain link pen and used her as a breeding machine.  By rights she should hate people, but she’s remarkably mellow. Strange people could break into my house, and Sheena would sit back and quietly observe the other two dogs tearing the invaders to shreds.  Clara and Lilo do not like unauthorized visitors, and either Jerry or I have to carefully introduce them to new people.  They are polite with people as long as either Jerry or I am around to supervise them, even if they don’t particularly like that person.  Even so, the only person we allow in the house if we aren’t there is Steve-o, because Clara and Lilo like him and will tolerate him in “their” house.   It’s a funny thing but I swear having him watch the dogs last year while I was in NC is part of the reason why I have my granddaughter. (I left them movies, but go figure…)  I can take any of my dogs to be boarded- Clara and Lilo are surprisingly compliant when they aren’t in their own territory, and all three of the girls have been perfect angels when they have had to stay at the Vet, but at $25 per day per dog…that ain’t happening in my world.  I don’t spend $75 a day on my own frigging motel room on the rare occasions I travel.   Usually I can find a good deal on a Days Inn on one of those travel websites, but it’s been awhile since I’ve had the luxury of pleasure travel. 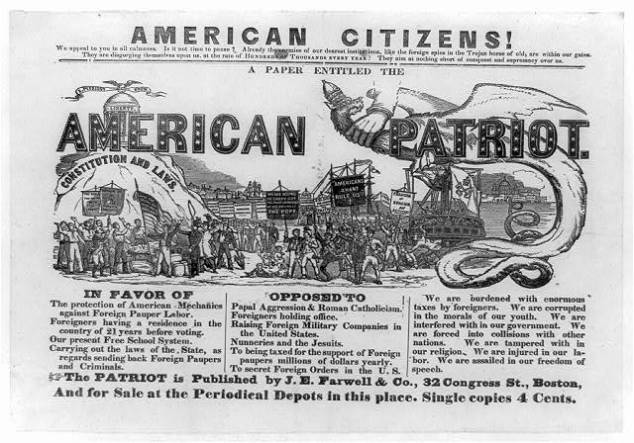 I  understand that people get their undies in a bunch about illegal immigration, and in these times of economic shittiness, as well as considering we have a presidential administration that doesn’t give a rat’s ass about preventing terrorism or upholding national security, I have to agree.  It is a matter of national security to keep terrorists, criminals and others who are a danger to society and a burden on the economy out of this country.  The American Patriot issue above from 1852 is disturbingly anti-Catholic, (I don’t necessarily go along with Catholicism in its entirety, but I have no problem with Catholics) but given that a good number of immigrants in 1852 were either Irish or Italian, the fact that they were foreign, that they were competing with local workers for jobs, that there were criminal elements involved and  they adhered to a “strange” religion didn’t help their cause.  Today, it doesn’t help the cause of Islam or the acceptance of Muslims that the perpetrators of 9-11 adhered to an extreme form of Islam. 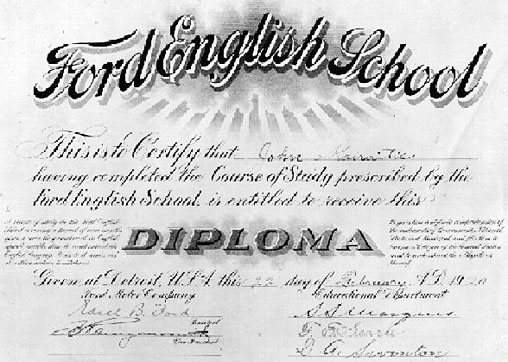 I bet most of today’s high school students couldn’t pass the course offered at the Ford English School.

I don’t have a problem with legal immigration.  Henry Ford had a good model for that.  Learn English.  Assimilate into the prevailing culture.  Work and contribute to society.  Abide by the law.  The problem is that there is no set model for those who wish to come to this country and become legal citizens to follow.  There is no requirement for immigrants to learn the language or become gainfully employed.  When foreigners are allowed over here, they’re often given generous benefits for housing, starting businesses and other perks that are denied to the native-born.  Yeah, there’s a lot of resentment and fear toward illegals, a disdain for immigrants in general, and to a degree rightfully so.  Either follow the rules or go back to your third world hole.  Don’t bring the third world hole to us like Bill Clinton did when he brought half of Mogadishu to Central Ohio. 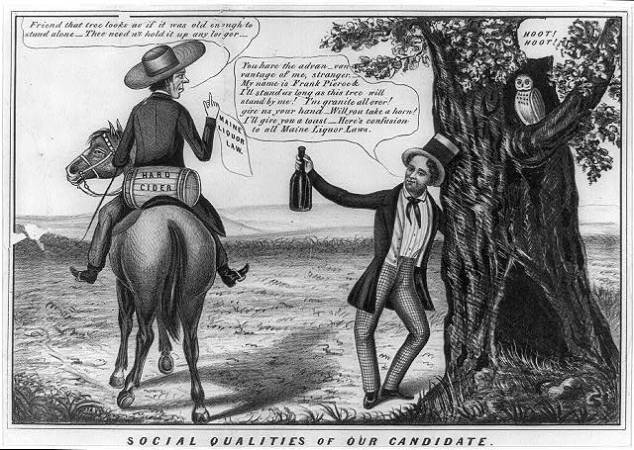 Sadly, weak leadership never leads anywhere good.  If only we would learn from the (bad) examples of former presidents Pierce and Buchanan.

I have bemoaned the fact for years that people have failed to learn from history.  Right now it would behoove the American public to learn from the weak leadership and atrocious policy making of the Pierce and Buchanan administrations of the 1850’s.  What people don’t understand is their poor leadership was a contributing factor to the Civil War.  Then again, most people have a very poor knowledge of 20th century history, let alone of the 19th century and earlier.

Ask not for whom the bell tolls, indeed.