The tapeworm diet was featured on an episode of 1000 Ways to Die not too long ago.  I know I probably shouldn’t watch that show so much, but it is entertaining in a dark way to see the convoluted manners in which some people have managed to earn their Darwin Awards. While the thought of going from a size 12 to a size 2 in a few weeks is tempting, the thought of flatworms burrowing through my vital organs and feeding on my blood and other important stuff gives me serious pause.  If we give dogs a monthly de-wormer (essentially this is what Heartgard and other products that contain Ivermectin do- kill off any worm larvae that end up in a dog’s bloodstream or intestinal tract) to prevent them from getting tapeworms, heartworms, and other assorted wormy life forms because they’re harmful to dogs, then it would stand to reason that it’s not healthy to harbor tapeworms in one’s innards.

It’s interesting to note that dogs are always susceptible to worms because of the rooting around and scavenging that they do in the course of their daily activity. There are even worms that are spread by fleas and other disgusting insect life, which is yet another reason to avoid insect infestations.  Dogs’ preoccupation with all things feces also predisposes them to exposure to all sorts of nasty things (sort of like little kids.)  The difference with dogs is that they seem to have much hardier immune systems than humans- at least in regard to infectious disease- and digestive systems that can metabolize almost anything.

Lilo (and every other dog on the planet) might consider cat poop to be the highest of rare delicacies, but she won’t eat lettuce.  Unless it’s soaked in Ranch dressing, that is.

I wonder if the health “benefit” one would gain by losing weight on the tapeworm diet would be negated by the effect of the tapeworms munching on stuff they shouldn’t be munching on.  It’s one thing if they’re sharing that chili dog you had for lunch, but quite another if they are making a meal out of your liver, or your brain.  I guess the bottom line on weight loss by parasite is that it’s probably ill advised.

As far as burning up calories the old fashioned way, a rousing round of housecleaning can do that.  Even though it can count as exercise, I hate cleaning.  I consider exercise to be a necessary evil also. I don’t like it, but I also don’t like the prospect of my ass being as big as the front end of my car.  I don’t want to be the one trolling through the Newark WalMart in search of size 20 underwear.

These could also be a car cover for my Yaris.  Just sayin’.

The problem with cleaning, in my house, is that it is an ongoing effort in futility.  Jerry can destroy hours’ worth of scrubbing and cleaning in one drunk-n-stupid episode, as was evidenced last night.  All he has to do is get good and besnookered, go out to “water the garden” at dusk, and then traipse back on in the house, flopping about, soaking wet with dog shit caked on his shoes.

Let me fling poo on your linoleum!  YAY!!

Yes!  My purpose in life has been fulfilled- scraping dog shit off of the linoleum in the foyer, and then in the kitchen (thank God I got to him before he made it to the carpet, which I had also just scrubbed and cleaned Saturday) and then getting to (joy and rapture) scrape the dog shit off his old-man velcro shoes and hose them down.  Then I got to peel his wet and dirty clothes off the bathroom floor, and had to clean the floor up too.  Never mind that I had scrubbed down and mopped the foyer, the kitchen and the bathroom on Saturday.  Apparently I needed to do it again. 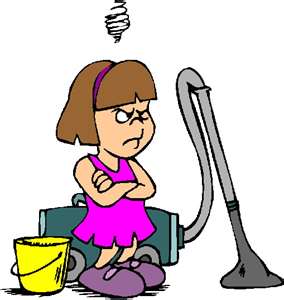 I would hire cleaning people.  If I could afford them- and if I wouldn’t be embarrassed at what they might encounter.

I have found beer cans in places where beer cans should never go.  Beer cans next to the toilet (why not just eliminate the middle man and pour the Natties right on down the john?)  Beer cans in his underwear drawer.  Once I even found a beer can in the litter box, which is making me wonder if Jerry is going down there (the cat boxes are in the basement) and helping the dogs sample the recycled feline buffet.  If it were only beer cans, it wouldn’t be so bad, but Jerry’s filth parade goes far beyond beer cans.

Jerry is also an incorrigible smoker.  If he removes a cellophane from a cig pack, it ends up where it lands- on the table, on the floor, in a house with a mouse- wherever, as long as it’s not in the trash.  The cellophanes are just the tip of the iceberg, not to mention the bane of all vacuum cleaners, especially when encountered in combination with copious amounts of dog hair.   Jerry also has essential tremor, so the world is his ashtray, literally.  That’s part of the reason why it pisses me off so much when he smokes in my car.  I don’t think he can actually make the ashes land in the ashtray, (in the car or at home) and I’m doing good when he actually puts the butts out in the ashtray instead of (acck, acck, acck) the toilet (bad enough) or in the sink.  Removing nicotine stains from porcelain is just so much fun.  I need just such a hobby.

It’s just depressing to spend an entire Saturday cleaning and the place is trashed again by Monday night.

Some more enlightened souls may ask, “Doesn’t Jerry do his share of the cleaning?” I know that there are some men who understand the importance of helping with errands, cleaning and stuff like that when their wives also work.  However, the fact that I don’t have 24/7 to fetch stuff for, clean up after, and cook for His Nibs does not register with Jerry.   Not at all.  He was raised by wolves.  He willingly wallows in squalor as long as it means he doesn’t have to think about where the beer cans, cig pack cellophanes, or dog shit lands.

So forgive me if I’m no Martha Stewart.

I can cook, but you can leave the decorating and cleaning to people who don’t live with Jerry.

3 thoughts on “The Things We Do For “Health,” and the Scourge of Domestic Drudgery”