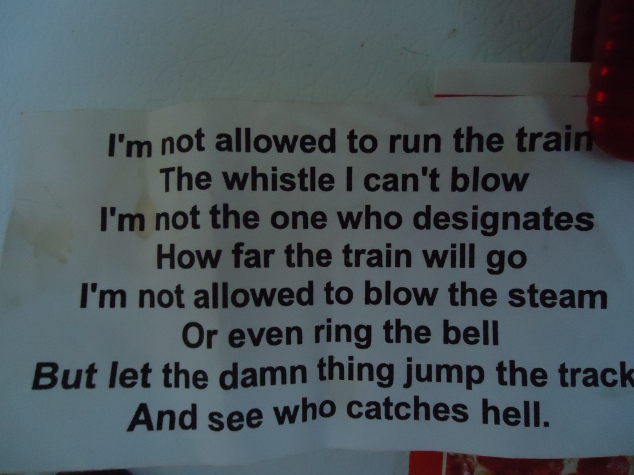 I’m not sure who wrote this little piece of poetry, but the railroad analogy is fitting.

When I was about four years old, Dad had a friend who was into amateur photography.  Given that this was 1973 (long, long before the days of digital photography) and having any kind of pictures taken was expensive, Dad jumped on the chance to take me and my sisters to this guy’s house to have our pictures taken.  Joy and rapture.

I don’t remember a whole lot about it other than having to wear a purple polyester pantsuit that was hotter than hell and itched something fierce and even worse, matched the ones my sisters were wearing.  Grandma had made these pantsuits.  They were ghastly according to today’s standards, but would have been fashionable in 1973.  They would have been a lot more comfortable had they been made of a breathable fabric, but sorry about my luck. To make it even less comfortable, we also had to wear these little black patent mary janes (not rubber-soled, of course) with itchy white lace socks.   I ended up with a nasty heat rash from wearing this ensemble, I do remember that.

Anyway, the guy with the high faluting camera also had another high faluting toy out in his yard for his own kids- an electric train on tracks that kids could ride on.  We were poor kids, and whatever good toys we had access to were immediately commandeered by my sadistic oldest sister.  I got toys after she and my other sister and usually the dog too, had destroyed them.  I had never seen any kids’ toy as cool as that train, ever.

My sisters were more worried about chasing down and beating up the two boys who lived there, which meant I had the train all to my own happy self.  Since I was none too thrilled about a.) wearing this horrifically hot and itchy pantsuit in the middle of August,  b.) having my picture taken, c.) having to be around both strange people and my sisters, I decided to stay on the train.  That was fun- and there was a bit of a breeze.  Suffice to say that Mom and Dad both had their hands full with peeling my sisters off those poor boys, so I got a good bit of time on the train.  So much so that the guy took quite a few pics of me on the train.  No, I’ve not bothered to scan the pics. I don’t want to ask Mom to borrow them long enough to scan them.  Even at four years old I was awkward and geeky and nearsighted as well as horribly dressed. It was the ’70’s after all.  I think I am permanently allergic to polyester after that.  I break out in heat rash just thinking about it.

That was the last time I technically got to run the train.  That’s fine with me.  It was fun while it lasted.

It could be worse.  Perhaps this is a creative way of selling a colonoscopy.  $999 would be a discount.

I have to wonder why sweepstakes and drawings are usually for something nobody really needs anyway.  Money, that’s cool, or even the $5000 Target gift card that I keep doing the surveys to get a chance to win.  But who really wants a lot of the crap that’s given away?

Coffee mugs are useful, but I’ve used the same one at home for 30 years. 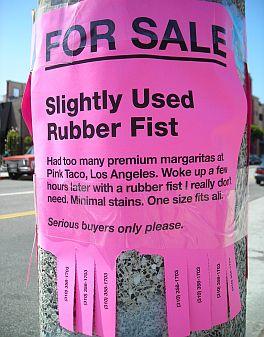 Here’s some interesting marketing.  Looks like this guy’s selling an item that most people wouldn’t want to touch even if it has been soaked in Clorox for a month.

I live in the Midwest, where those of us who are into things like hot pink rubber fists tend to be a bit more discreet about it, so I don’t see ads like this every day.  It is a bit disturbing that a few of the phone number tags are missing, meaning that at least a few people entertained the idea of inquiring on this item.  I can just imagine an inquiring caller’s conversation regarding this lovely artifact:

“Hi, I’m Bruce, and I’d like to know more about your fabulous rubber fist!”

“Oh, yes, it’s just super!  But I have three others just like it and I really don’t need a fourth, you know. I only have so much room.”

Which brings me back to the movie, Borat.  The guys inquiring on the fist might have amputee friends back home. “I’ll find you a new arm in America!” 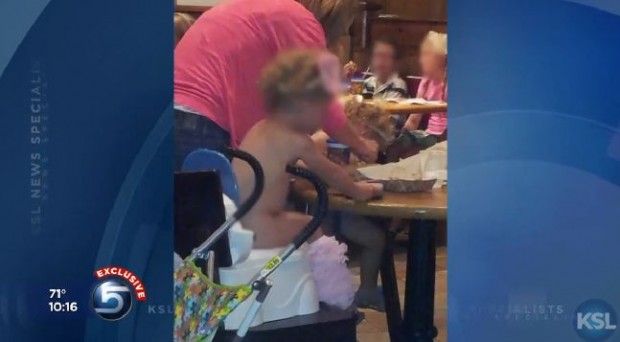 At least I didn’t actively encourage my son to eat whilst sitting on the john. I wouldn’t put it past him, but I didn’t encourage it either.

I had to get a laugh out of this- a woman parking her twins on kiddy potties in the middle of a McD’s or other fast food joint somewhere in Utah.  I am not the squeamish type, and the seats in most fast food joints are probably just as germy as the kiddy potties to begin with, but having your kids sit on the crapper pretty much in the nude, dropping a deuce through lunch is a bit much.   This is all the more motivation for me to do what I normally do on the rare occasion I dine of fast food.  I normally eat in the relative quiet and cleanliness of my own car.

The only time I go into a fast food joint is if I’m traveling and have to use the ladies’ as well as score some chow.  I am not a huge fan of public bathrooms, but if you gotta go, any crapper with a door will do.  Guys have the advantage here because most of them can keep a two-liter drink bottle for the purposes of whizzing on the go (make your own trucker bomb) but that’s just not practical for chicks.   I am not going to drop my drawers along the side of the Interstate to whiz for some jackwagon to take pics and plaster them all over creation.  I will concede that the public restroom is only one notch above the public fitting room (and I do NOT try on clothes in public fitting rooms ever) as far as creep factor, but sometimes necessity rules.  I don’t see myself going to adult diapers any time soon.

Far be it from me to judge another’s fetish but the “adult baby” fetish is just plain gross.  This dude looks like he should be on one of those sex offender/predator lists, no?

2 thoughts on “I’m Not Running the Train, Which is Fine With Me, and Crap-n-Go”