Interesting to visit, but I don’t want to stay.

The Haunted Prison experience was awesome.  I’ve been to some really good haunted houses, haunted hayrides, etc. but this one takes the prize.  The bad thing is that you can’t take pics inside the prison- I took this one from the road outside, but we had to leave the cameras and the cell phones in the car.  I will say that I was a bit taken aback when I noticed the tickets include a warning that the management is not responsible for anyone losing control of his/her bladder and/or bowels.  I remained continent, which is saying a lot probably considering that I was one of the oldest people there, but I am really glad I used the ladies’ before I got in line.

The fact that the Mansfield Reformatory was a working prison for about 100 years adds to the creep factor quite a bit.  It’s a huge facility, but only a very small portion of it is used for the haunted prison excursion, and most of those areas are in the oldest parts of the prison. Some of the cell blocks are five stories high.  As the building aged, certain parts of it were left to decay while newer additions were built on.  I don’t see how it would have been feasible to heat the cell blocks with the five story high ceilings- let alone to work out some sort of plumbing arrangement.  Ohio winters can be deathly cold- and summers can be deadly hot as well.   Suffice to say without decent HVAC provisions this part of the world is unlivable even if you’re in prison. Some of the cells we saw had toilets while others didn’t, but then it was hard to tell which parts of the prison were shut down when.  The whole place was decommissioned in 1981, so all of it’s been sitting around rotting for over 30 years anyway.

As one who is cursed with the respiratory funk anyway, a bloody head cold really sucks.

I hate snot.  I hate drowning in it.  I hate hawking it up all over the place.  Green snot, brown snot, yellow snot, clear snot, I would love to go for a day without choking on it.  Even when I’m not suffering from any acute contagion of the respiratory system, the snot drainage down the back of my throat is constant, and I choke on it unless I sleep with my head elevated at a 45° angle.  When I am suffering from an acute contagion of the respiratory system, I am a veritable snot Niagara Falls. Elevation does not help, unless I am sitting straight up.  Vast quantities of anti-snot medications are required to keep me breathing at all- in between hacking up huge snot balls.  Think the Ghostbusters movies and you have it. 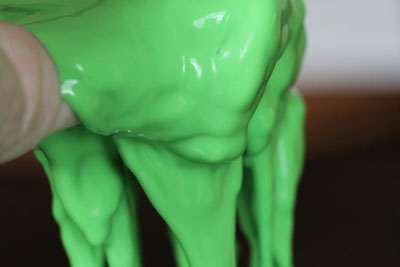 No, I am not exaggerating.  I wish I were.

Of course I take three days off trying to escape the rat race and all that mess, only to spend those three days (and the weekend too) swilling Nyquil and spewing forth gallons of disgusting, slimy multicolored snot.  Today’s a lot better than the past few days, although I’ve got the Dayquil and the anti-snot pills handy should I need them.  The snots did have one good side effect though.  Jerry pretty much kept his distance and his whining was at a minimum.  As I get better that will probably change.  I did get some quiet time in between being heavily medicated and hawking up infinitely foul goo to watch some of my favorite movies and chill out with the dogs, so it wasn’t a total loss.  I do remember- as if I needed a reminder- why I am almost OCD about being around those with contagions though.  The bad part is that no matter how paranoid you are about hygiene and handwashing and all that noise, eventually you will get down and something will get to you.  Admittedly in the past few weeks I’ve been pretty stressed out and doing too much and getting run down so I think it was inevitable no matter how much Lysol I spray or zinc lozenges I take.  At least today I see marked improvement, which sort of figures, since I have a Dr.’s appointment Friday.  Either I will be completely cleared up or one step in the grave by then.   I never seem to be able to get in when I’m actually sick.  Go figure.  Personally as far as the various respiratory funks go, I think modern science hasn’t progressed much more than the patent medicine hawkers (man, I am using the word “hawk” a lot in this post) of the 19th century.  I’d probably done just as well and paid less for this:

Of course most patent medicines were either opium or alcohol or both.

Billy Joel wrote a song many years ago called “Summer at Highland Falls.”  I sort of wonder if Billy Joel might be bi-polar because the refrain of the song is, “it’s either sadness or euphoria.”  I can’t say I can ever remember being euphoric, but then I’m not bi-polar.  Living with a bi-polar person did give me future reference on how to deal with unpredictable coke head bosses I would encounter later in life.  Mom was never a coke head (thank God) but untreated bi-polar people and coke heads act remarkably similar.  I know the sadness end of the equation all too well, but most of the time my emotional state can be described as a quiet, bland sort of melancholy.  Unless of course I’m watching Beavis deep fry a dead rat as he’s toiling away at Burger World, or listening to Butthead point out every possible bit of double entendre he hears.  I don’t know why I find such puerile comedy so hilarious, but I do.  Euphoria, not so much, but I’ll take what amusement I can get.

The pisser is, as I found out right after having all four wisdom teeth chiselled out, I’m highly allergic to codeine, which is a natural opiate…no good drugs for me 😦

I did have a rather fortuitous encounter- actually two of them- as I was returning from the campground.  I was stopped in traffic coming back from Lancaster only to get a glimpse of the Romney tour bus. (I got a pic- though somewhat crappy since it was moving- that time.)  Then as I was coming home from Kroger’s later on Friday I’m stopped about a block from my house only to discover that Romney and his retinue are chowing at the City Barbeque next door.  That was rather cool.  I didn’t get pics that time but I did get to talk with one of the Franklin County Republicans who got to chow with Romney and company, so that was somewhat cool.  I hope that it’s a portent of things to come.  I’d been pissed if I’d had to wait in traffic for Obama and his minions, and even more pissed to think he was chowing next door to my house.  Both candidates have been spending a lot of time in Ohio.  My condolences- as I’m sure that they’re both used to much more exciting places- but maybe you’ll both see how us ‘po folk live and have a little empathy for us, eh?