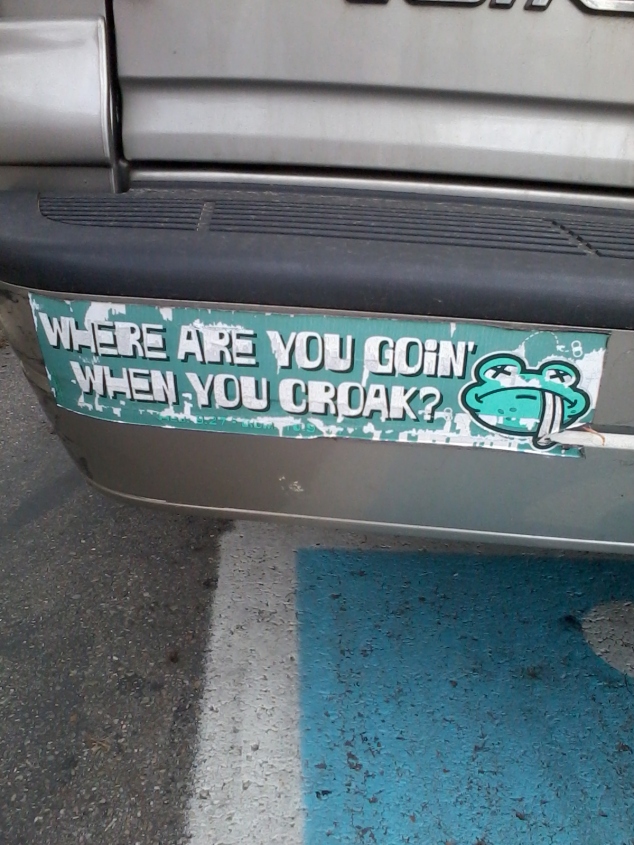 I’m not the sort of person who tries to shove my faith down people’s throats, at least not in an overt manner.  My faith does inform my worldview, and it does influence what kind of an example I strive to be, (remembering that some of us are examples of what NOT to do) but I’m not going to be the one handing out Chick Tracts or scaring the holy bejezus out of people with threats of damnation and hellfire.  I believe there’s a real hell, but I can’t keep anyone out of it who really wants to go.  I can’t bring anyone to heaven either.  Jesus said He is the Way, the Truth and the Life.  If you want to inquire about heaven, then Jesus is the one you want to get to know, not a crusty old purveyor of automotive parts.

Anyway, I’ve made an observation that is not surprising.  I’ve known for years that the gene pool could use some more chlorine, but I think that the shithouse rat crazies have assumed control.  Mind you, I am no paragon of mental health, but today’s headlines (even as much as I try to avoid mainstream news) are positively insane.

Chris Christie had LapBand.  Is this a surprise?

In my world “news” should be unusual or enlightening information.  I’m glad that Governor Christie could afford to have LapBand, despite the fact I’m one of the poor suckers who has to decide which scripts I can afford when.  I am sort of reminded of the morbidly obese who ride around in the WalMart motorized scooters.  If they would get off their rumps and walk through WalMart, perhaps the scooter would not be necessary.  If not for the expensive (and calorie laden, no doubt) diet, perhaps he would not have needed the expensive surgery.   But I will be merciful, because I know poor metabolism is a bitch.

As far as being one challenged by weight management, I will say one thing about the correlation between being poor and fat (as opposed to being rich and fat.)  When you can’t afford healthy food, you will buy what will fill your belly, even if it is discount mac-n-cheese, or all kinds of corn-laden, sugar-filled, salty snacky food.  Fresh produce (especially in places like Ohio) is of poor quality and exorbitant high price in winter.  Granted, if you are observant you can get frozen fruits and vegetables- which are almost as good health-wise as fresh, at a reasonable price without preservatives, salt or grease, but you have to look.

This isn’t news.  If he loses weight and gets buff, and stays away from Obama, AKA: Beezelbub, that would be news.  Maybe.  I lost a lot of respect for Governor Christie when he sucked up to Obama after the hurricane.  One does not kiss up to evil just because it is expedient, but hell, if I could afford a medical procedure (if if existed) that would make me 6′ tall and 120# I’d be the first one to break out the MasterCard. 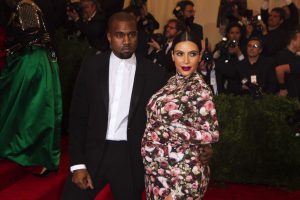 Kim and Kanye– How Dare She Wear My Curtains!

I understand that most conceptions are accidental.  The illustrious Steve-o wasn’t planned, and neither was his daughter.  However, I think she could have done a better job at picking a baby daddy as well as picking a dress that doesn’t make her look like someone wrapped the Titanic in my dining room curtains.  Then again, should the DNA verify the unfortunate child’s paternity, Kim will never have to eat cheap boxed mac-n-cheese or have Cream-of Wheat for every meal the first week of the month ever again, as if she ever did anyway.

Now You Can Leave Cleveland!

I would be bat shit crazy too if I had to spend ten years locked away in Cleveland.  Ten minutes in Cleveland is too much for me.  Just think: one of these women’s captors was a school bus driver for the Cleveland public schools.  Think of all the little girls who rode on his bus.  Creepy.  Granted, Cleveland is the hotbed of far-left nut jobs (think New York, west annex) in Ohio, but I have to wonder how nobody noticed three women (and the six-year old girl) hidden in a house for ten years.   In all seriousness, I really feel for these poor women, especially the little girl, who probably has never seen the light of day.

The shrinks are going to be plenty busy with these people, which is really sad.

This guy hasn’t been impeached and removed yet.

The devolution of humanity is on the the fast track and is incrementally gaining speed.