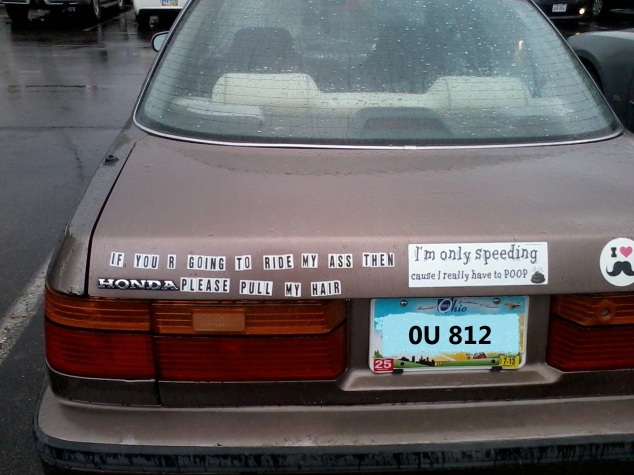 This car I spotted in the Target parking lot cracked me up.  The likelihood of this decrepit old Accord attaining highway speeds is actually fairly good if it’s getting a reasonable amount of regular maintenance.  I just hope the timing belt’s been replaced some time in the past ten years, otherwise the unfortunate owner of this rather obsolete piece of automotive technology will get a thorough schooling on the definition of interference engine. Usually when the belt breaks, it occurs at highway speeds, out of the blue, in the middle of nowhere.  The non-motorhead translation is, that if that timing belt breaks on an interference engine, your engine is toast.  Instantly and irrevocably, as in bent valves, or even valves through the pistons.  The repair cost (i.e. engine replacement…) is usually more than the value of the car. 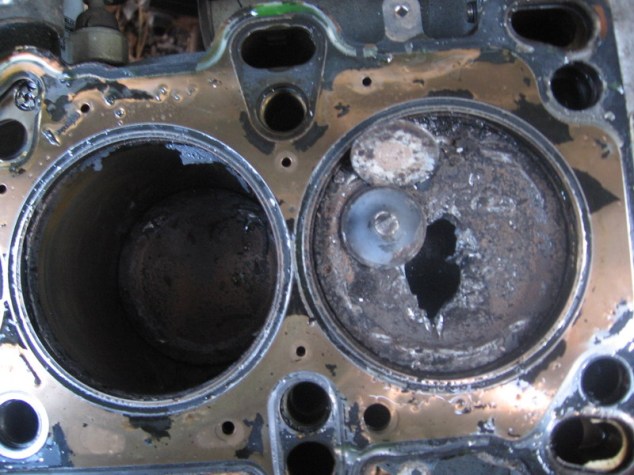 This is one reason why I chose a vehicle with an engine that features a timing chain, but in their defense, the old Accords- properly maintained- are often 300,000 mile or more cars.  Toyota still uses belts on some models, but most of their engines are clearance engines, (if the belt breaks there’s enough clearance that the valves don’t hit the pistons) so the worst that happens to you is that the car immediately stops running. You’ll have to have the car towed and replace the belt, which will cost more than if you had replaced it before it broke, because the tech will have to line up the cam and crank before installing the belt.

Ok, enough motorhead jargon.  Automotive is almost worse than the medical profession as far as specialized language.  It’s sad,but every time I see one of those old Hondas I remember the people who didn’t pay attention to replacing that belt from time to time.   Just like every time I see an old Camry I think about (well, a number of things) but primarily about a certain primadouche technician who couldn’t stand the sight of blood and guts.  I couldn’t help it that mice liked to make nests in the blower fans. 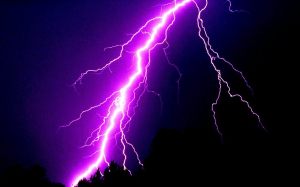 This morning I was rather disappointed when I went to go to the Y and the pool was closed due to thunderstorms.  I know they have rules regarding closing the pool (even though it’s an indoor pool) during thunderstorms and for a little while afterwards, which may be based on dubious science, but it still sort of sucked.  I didn’t waste workout time though.  I got on the one of the elliptical machines and still got in my 40 minutes of exercise.  I do have to wonder, though, if lightning could strike the pool, isn’t there’s an equal chance that lightning could strike the workout room where the ellipticals and other machines are?  As long as the building meets modern electrical codes, which it should since it was built in 2005, you’re safer in the pool than you would be in the showers, in the locker room,- or dashing out to your car in the parking lot.  Hell, I’d probably been safer in the pool than on the elliptical machine, but either way the odds of getting struck by lightning while working out indoors are probably about as good as me winning the lottery or suddenly being 6′ and 120#.  Ain’t-a-gonna-happen.

However, sometimes rules are made either without considering the science that nullifies the need for them, or old rules hang about that were made using outdated standards.  Whether a rule is logical or not isn’t my judgment call.  When I was in high school the whole concept of having to abide by illogical and archaic rules drove me bat shit, and still does to a certain degree today, but doesn’t change the fact that I still have to abide by them. 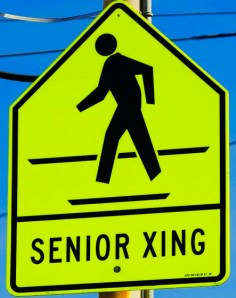 Last night when Jerry and I were out at Little Sicily’s- a tiny but fantastic pizza joint on the far east side of Columbus- there were a group of geezers sitting across from us.  I like old people.  Their perspective is closer to mine than people my own age or younger seem to have.

So as I was eavesdropping on their conversation, one of the ladies mentioned that life has gotten way too complicated today.  In a lot of ways yes, and even in some ways for the better, but I understood her frustration at how unsafe the world has gotten.  It seems that the powers that be try to take all the danger out of things we consider fun- it’s a major ordeal to get a kid in and out of a car seat for instance, and anyone who would have worn a bike helmet back in the 70s would have been assumed to be someone who had a weak skull or prior brain damage.  But in spite of adding more precautions and layers of safety, the world gets more and more dangerous- or at least that’s what we hear about. 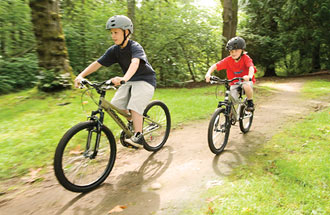 A good example is what people do with their kids.  Back in the day no one had a problem with letting the kids roam the neighborhood, because everyone knew everyone else, and any adult could correct a child and bring that malfeasant offspring to its parents’ attention.  It was a double shame to be caught in misadventure by someone other than one’s parent, because not only would the first adult likely tan your hide, so would Dad, for committing two offenses- the original offense, and the added offense of misbehavior within public scrutiny. 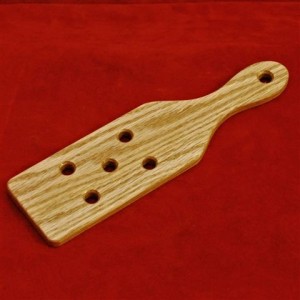 This was Dad’s definition of the “Board of Education.”

Today I would be positively mortified of correcting another’s spawn, even though the little barbarians may richly deserve it, for fear of being sued.  Parents are afraid of correcting their own children for fear either of the child him or herself reporting them for child abuse (another reason to keep your kids out of public school- as the kids are drilled from day one to report, report, report) or because some well-meaning but thick-headed bystander will mistake well-deserved discipline for a “beating” and call Children’s Services on them. 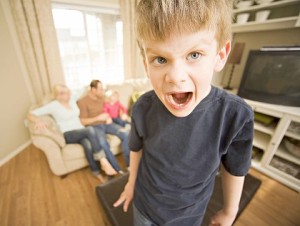 Personally I think that it’s abuse to keep a child locked up inside, to let them become obese, and to fail to discipline them when they deserve it.  The wussification and the overprotection of children is partially in response to the horrible headlines we see where children actually are abused, but most of it stems from a parental desire to “make things better for my kid.”  This desire to “make things better for my kid”- combined with the abysmal performance of most public schools- has resulted in an entire generation of overindulged, undereducated, young adults who expect everything to be handed to them and for their actions to lack consequences.