Is that a weasel or a ferret?

I never knew Queen Elizabeth I was enamored of weasels or ferrets, (the creature on her arm is an ermine- a polite name for a variety of weasel) but in Elizabethan times I’m sure a lone member of the Mustelidae family wouldn’t have added much to the general pestilence of the court. Bathing wasn’t terribly high on the priorities of most Elizabethans.  Royalty did bathe more often than the peasantry, who I would assume would only get a good douching in a rainstorm.  I think the royals did bathe relatively often- once a week or so- and they did have access to perfumes and soap.  I shudder to think about toileting arrangements for the masses and their livestock back then though.  No wonder all those people died from typhoid and cholera.  Not to mention the plague, which has recently been identified in a squirrel population in California.  Too bad it’s the wrong kind of squirrel population.

These aren’t the squirrels to which I refer.

I’ve always thought it a bit strange that Americans still seem to be enamored of British royals.  Truth be told today’s royal family- the Windsors– (or should I say Saxe-Coburg and Gotha) are probably more German by ancestry than anything.  The name change to Windsor was in response to anti-German sentiment surrounding WWI.

Germans with English names.  Sort of like Steve-o, who has an English name, but has more German ancestry than the rest of the family.

Today’s royalty are more or less figureheads with no political authority, but back in the days of the American Revolution, kings (and sometimes queens) held the power of life and death for their subjects.  Yeah, that kind of power would be kind of cool, but it could also lead to all kinds of witch hunting and cronyism and the mysterious disappearance of political opposition.  Oh, the Obama administration rings a bell, at least as far as the scandal and sleaze factors go.  What’s worse about  Obama is whatever privileges he thinks he deserves were usurped via dishonest means (i.e. only natural born American citizens are eligible to hold the office of the Presidency) as well as egregious voter fraud.  I haven’t forgotten about that- and I’m not going to either.  History will prove me right in the end.

The fascination some people have with today’s royals to me is a sort of a modern-day hold out of the fairy tale myth of the all-powerful ruler.  The closest thing America has to royalty (don’t even think the Obamas, even though they think and behave as if they have royal entitlements) is the Hollywood crowd.

I think the British royals to be far less sordid than Hollywood, and far more admirable than the Obamas.  The royals (unlike most of Hollywood) even have some redeeming features, such as sponsoring legitimate charities, and serving in the military.

I don’t see the Duchess of Cambridge out there screaming about “reproductive rights” (aka: abortion advocacy) while at the same time crying crocodile tears and telling everyone that eating meat is murder. I don’t hear of the Queen telling her subjects that she could have been Trayvon Martin 30 years ago either.  I can see where she might show some affinity for Elton John, as he and the Queen share similar taste in hats, but I can’t see her claiming Trayvon.

I don’t think I would vote for this guy- except to piss off Hillary Clinton.  She probably has a bigger unit than him, so she shouldn’t be too upset.  If I really want to sausage-gaze I think there are better endowed specimens than Wiener (in spite of the name) to be found online.   Then again it’s one thing if women are requesting sausage shots from our friend Mr. Wiener, and quite another if the sausage shots are being sent unsolicited.   To me it wouldn’t be nearly as perverted if the women are asking for the pics.   Then at least they’re getting what they deserved.

Now, for a guy to just randomly send a portfolio of Mr. Happy to every female for whom he has contact information, either he’s a 13 year old pulling a rather sick prank, or that’s a cry for attention. 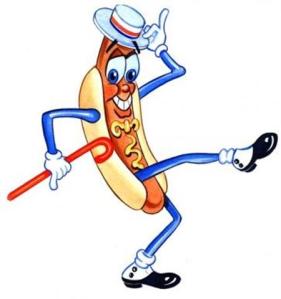 I’m not a snake.  I don’t prefer to consume my prey whilst it’s still alive. I don’t want my food to dance. Especially wieners.  I want my food to remain perfectly still until I decide to move it from the plate to my mouth, unless of course I’m eating Jello.