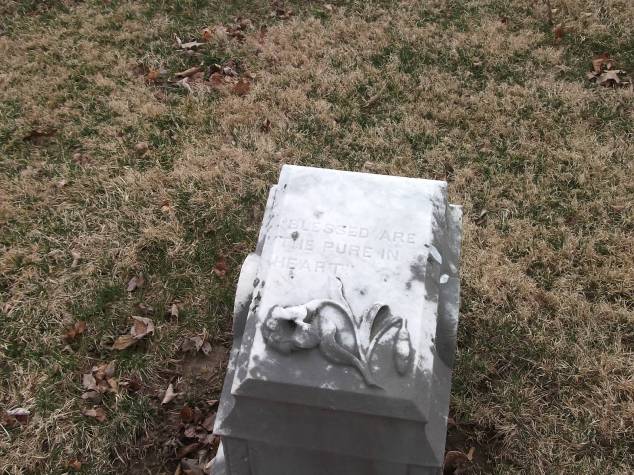 They say, “Ask not for whom the bell tolls.”  I used to be able to hear various church bell cotillions growing up, but today the only things I hear from my surroundings are the various airport noises, police and fire sirens, and the tornado siren that goes off every Wednesday at noon.  Perhaps the church bell cotillions have gone out of style, in much the same way as we try to distance ourselves from the natural rhythm of death and dying.  In Victorian times, death was up close and personal and in your face.  There were no nursing homes to warehouse the elderly, and for the most part, when one got seriously ill or injured, death came quickly, usually either on the spot or at home.  There were no fire squads or life-flights or trauma units to tend to the catastrophically injured.  People didn’t linger on in cancer wards or on machines in intensive care units, sequestered off to die, far away from prying eyes.  You just bit the big one wherever you happened to be. 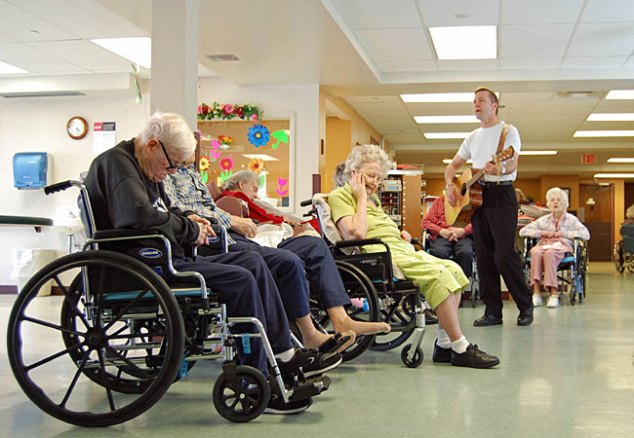 Maybe some Metallica, cranked up, would help.  I doubt it.

Infants and children died at an alarming rate as well, which begs the question, how emotionally invested were parents in their children?  I could see the temptation in those days to keep loved ones at arm’s length rather than to dare to get too close, but I’m emotionally distant to begin with.  I don’t like getting too close to anyone even if I am somewhat confident of their continued longevity. 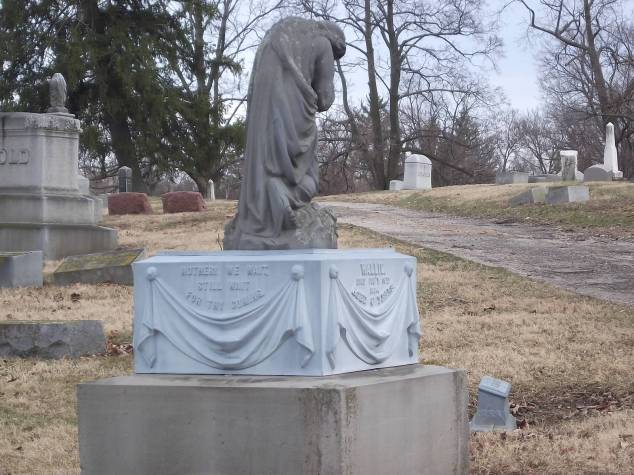 I do think that this mother was very close to her departed six-year old Wallie.  This headstone is both unique, and to me, rather sad.

Maybe wandering through a graveyard is macabre, and certain graveyards have a sort of a creepy vibe to them, but others are pleasant to wander through.  I’ve always found the Marion Cemetery to be a fascinating and aesthetically pleasant place to wander about, at least in the daytime.  I’d like to go back again with an empty memory card and several hours to simply take pics and read the headstones and try to visualize the people whose lives were behind them.

There are graveyards closer to my house, but there’s something intriguing knowing that I have relatives buried in the ones up in Marion County.  Some of my relatives’ graves are marked, but some aren’t, and most, I’d have fun finding.  I have yet to find the numerous relatives of mine that are buried in Marion Cemetery, but I also have to remember that place is massive- it covers hundreds of acres and goes back to before the Civil War.   When I took this batch of pics I was mostly wandering through the Civil War era sections of the cemetery.  It was cold that day and after about two hours I’d pretty much gone through my memory card (I have a bigger memory card now) and my joints’ tolerance for cold and damp. I’ve not done much traipsing about in other parts of it.  Yet.

Amos Kling was Florence Harding’s father. His obelisk is rather impressive, but I didn’t step back and get a pic of the whole thing.

I’m still amazed at how much money people had to have spent on some of these monuments.  Either Marion County was a far more opulent place back in the 19th and early 20th centuries (I’m guessing this one) or people spent a lot more scratch on the dead than they do now.  Maybe it was both.

I do know there are a good number of unmarked graves even in the Marion Cemetery which is the largest (and highest dollar real estate) cemetery in Marion County.  Whether poverty is the main reason behind that. or indifference, I don’t know.  I know some people die and nobody really cares too much about remembering them, but in the end how many people really are remembered for long, and how long do those stone monuments last?  Many of them from the 1880’s and earlier are almost beyond deciphering. 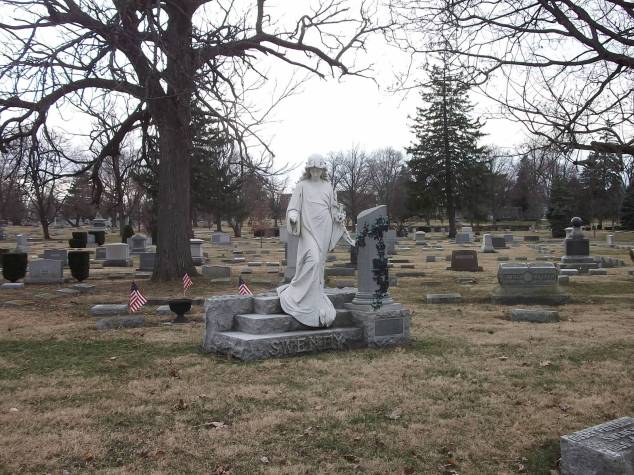 This one always intrigued me- is it an idealized image of the deceased or a heavenly specter, or both?

I think they were referring to the building being built.  Still funny though.