One (very rare, may I add) positive to come out of the Obama administration was that his ineptitude and usurpation of Americans’ rights made me very much more aware of my both my first and second amendment rights.  I never dreamed five years ago that I would ever want to own a gun, let alone apply for concealed carry. 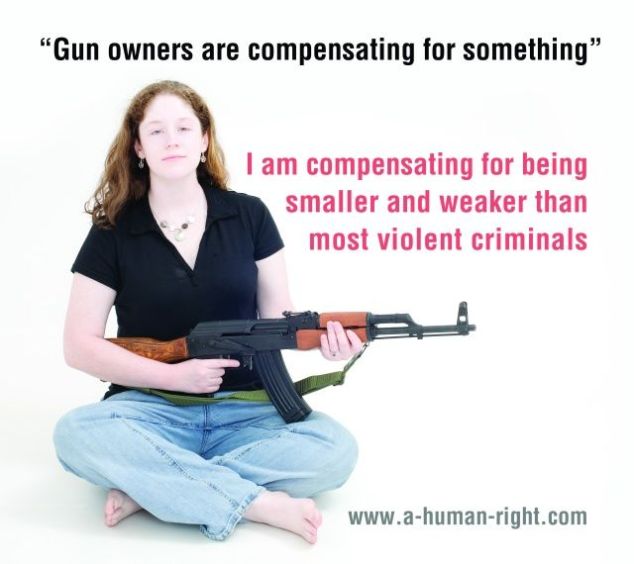 I don’t feel safe going anywhere after dark.  That’s not necessarily Obama’s fault, because the neighborhood where I work has been going downhill for years, so I will give him the benefit of the doubt on that one. I don’t feel safe going out after dark because there are crazy people out there. If the crazy people have guns, then why do I want to be unarmed?  Doesn’t it make more sense not only for me to be armed, but also for me to know how to use a firearm correctly?

This morning there was a shootout just down the road– in the WalMart I’m afraid to set foot in, no less.  The shooter shot a little kid, a woman while she was sitting in the dentist’s chair, (?) and a cop.  Shooting the cop got him killed- and saved the taxpayers some money- at any rate.  I don’t like to see people get killed, but shooting a cop is just plain asking for it.

I don’t blame the firearm, or even the fact that this guy had access to one.  I blame him and him alone.  Triggers don’t pull themselves.

Gun control is holding on with both hands.  Psycho control is what we need in this world, and unfortunately in the trees of civilization, there are more than a few fruits and nuts. 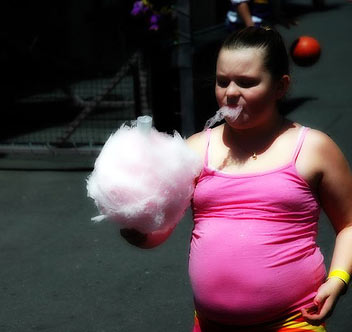 Really?  Where’s your mother?  In the rhino cage?  That explains it!

When I was growing up (in a rural, poor area…) there were no fat kids, except one.  That was Scottie-Scottie Two By Four.  You know the rest of the rhyme- “couldn’t get through the bathroom door/so he did it on the floor/licked it up and did some more/Fatty-Fatty two-by-four”  In middle school he was well over 200#.  This poor kid was harassed so relentlessly that the summer between seventh and eighth grade he went to football camp, as well as he went on a crash diet and lost well near 7o#.  By the beginning of eighth grade he was still big, but it wasn’t fat any more.  The coaches had ran it all off of him.  His parents were lard asses, which probably explains how he got so large- Daddy was about 400# and Mommy wasn’t far behind.  Yes, the kids made some serious jokes about Scottie’s Mom and Dad having to do the wild thing on a steel reinforced mattress.   There was also much speculation that they had to go out in the garage to do it because the floors in their house couldn’t take it.  I don’t know if that was true or not.  Some things are just not worth finding out.

The apple usually doesn’t fall far from the tree.

But most of us kids were thin according to today’s standards.  Even though I was never allowed to play organized sports after I had rheumatic fever, (and nobody wanted me to before, because I sucked,) I still got lots of exercise.  Self preservation is a good workout motivator.

My Mom liked to lock us outside and turn up the TV when she’d had enough, or just when she was spaz, which was a good deal of the time.  Although I was never a fast runner, I was good at hiding. I had to work to avoid getting my ass kicked.

One of my favorite hiding places was with the Rottweiler down the street.  I wasn’t afraid of him, even though he wasn’t always terribly clean, and his fleas had no problem biting me too.  The other kids were terrified of him.  Ass kicking or flea bites?  Most of the time I took my chances with the unauthorized insect life.  Mom really didn’t like it when I came home eaten to death with flea bites, and smelling like dog shit, but at least it wasn’t blood and broken bones. I did manage to get through childhood without breaking anything.  I did get blood poisoning from scrapes, cuts, splinters and so forth, a few times though. 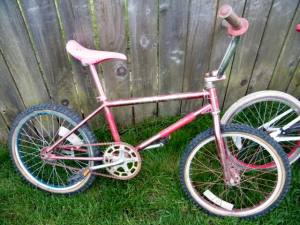 You put it together with whatever pieces you could scrounge.

Your bike was your transportation.  Mom didn’t get a driver’s license until I was 12 years old, and even though the state of Ohio thinks she’s cool to drive, I’ll beg to differ.  Riding a bike was safer on many levels than riding with Mom, even though there is a good deal of comic relief to be gleaned from her chronic road rage.

It’s sad but true- my son learned how to fly the one finger salute (age 5) by watching my mother road rage.

Now people don’t let kids ride their bikes unless they have so much protective gear on that they look like the freaking Transformers.  And then they can only ride their bikes on the designated bike path, never on makeshift BMX trails in the woods or back along where the railroad tracks used to be. 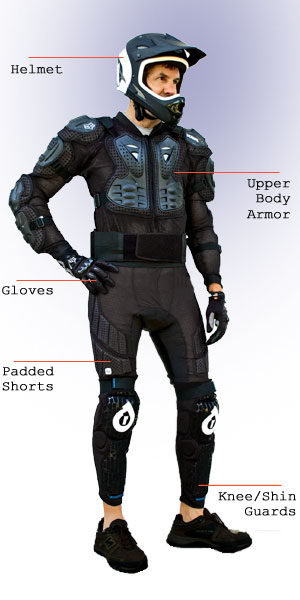 Welcome to the Thunderdome!  Oh, I was just riding my bike down to the carry out?  Really?

I think part of the reason why kids of my generation got plenty of exercise is that we were pretty much left outside to fend for ourselves most of the time.  Most of our families were poor.  Most of our families had two or more kids, so if one went missing, it’s one less mouth to feed.  Oh, well.   Now people treat their kids in much the same way as some of the poor dogs I see in the vet’s office.   They mollycoddle, indulge and literally “love” them to death. 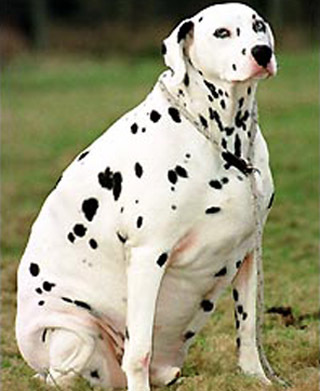 It is cruel to let a dog get this fat.

Science is on my side here: obesity kills dogs.  It’s a proven fact, and since a dog lives about 15 years give or take, it’s easy to see what happens when dogs are allowed to be hugely fat.  But there are people out there who just can’t see the correlation, that overfeeding and under-exercising their dogs takes years off their dogs’ lives.  Every time I take one of my girls to the vet’s office, I see obese dogs suffering from preventable health problems.  The vet sees it too and it has to really bother her.

Perhaps people are viewing their kids not as liabilities or money pits, but as pampered pets.  I don’t know which mindset is worse- leaving kids to their own devices and out to the wolves, or mollycoddling and indulging them.

Kids have to get out and get dirty.  Kids have to have limits.  One Klondike bar once a week is fine.  Three after dinner is way too much.

Maybe if we could worry less about the psychos in our midst, we could let kids go out and play and be kids and not feel as if we have to indulge their every whim.