While intelligence has its own rewards-

Unfortunately, most men are not attracted by intellect.

I should know that I should be more involved in my women’s Bible study group’s study choices before I decide to get into the study.   I probably would not have suggested our current study-even though it involves areas where I really need work, because it is hitting on some sore nerves.  This go-round it’s a book called Captivating: Unveiling the Mystery of a Woman’s Soul by John and Stasi Eldridge.

The study starts off with asking those touchy-feely questions about feeling desirable as a woman, and by going on with definitions of femininity.  I’ve pretty much assumed that I was haphazardly plopped into a female body and pretty much had to make do with being hopelessly uncoordinated and proportioned like a mutant troll.

I never really gave the whole idea of femininity much rational thought (much less to relate being feminine to spirituality)  other than to know, a.) I am a woman, b.) I am physically attracted to men, and c.) It’s hard to be successful at fishing when you really don’t have bait.

I’ve said before that I consciously choose to be involved in a women’s group precisely because I am generally not comfortable in friendships with other women.  It is a challenge for me to muster up the courage to dredge up and analyze and discuss anything to do with feelings- especially with women.  I get along better with men as long as the conversation stays on things concrete and/or technical, and with them it usually does.

When I have conversation with men, I am not subjected to someone going on and on about horrible fictional TV dramas, or being told how to do my makeup or hair, or having to care about what the Kardashians are doing.  Of course, the guys never really look at me as a woman either, until they are dateless and desperate and are scouting about for a twisted Ann Landers to give them some advice.  Asking me for relationship advice is about as ill-advised as taking driver’s ed from Ted Kennedy, but hey, you asked me.

It’s confusing and awkward enough to be wired the way I am- with the disconnect I have between having emotions and being able to express them- but even more so to be female with that disconnect.  Everyone expects women to be all emotional and touchy-feely, which I most assuredly am not.  I am definitely female, and a straight one, but not an emotional one.  From what I can see being wired to think more like a man than to emote like a woman is an odd conundrum, but then, I’ve never been “normal,” and really don’t know apart from observation what “normal” is like.

This is an interesting test.  Mine came out as INTP…surprise?  Not!

There are “thinking-dominant” women-people for whom thought is more natural than feeling- out there (even some who are not autistic) but most women tend to be “feeling-dominant,” where feeling is a more natural process than thinking.    According to the Myers-Briggs assessment, I am most definitely thinking-dominant.  I get (intellectually at least) that some people are feeling-dominant, but I don’t get that. It doesn’t make sense. For me “heart” doesn’t even enter the scene until “mind” has had a chance to process things first- and not always then.  I miss a lot of subtle nuances of expression because I just plain don’t see them unless someone points them out.

There are feeling-dominant men too.  Jerry is one, which might be the only reason why I put up with him.  He has that reptilian gut instinct about things and people that I absolutely don’t have.  I can only go with what I observe and with what makes rational sense. 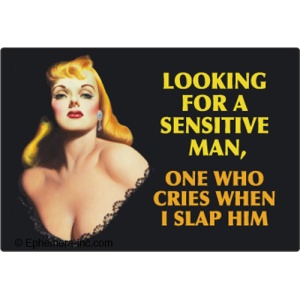 So this study into “being made in the feminine image of God” is proving to be more than a bit uncomfortable.  I’ve always felt sort of inadequate and inferior as a woman because I am neither physically attractive nor emotionally attuned.  Then there’s always that nagging, ongoing tension of thinking it necessary to validate my existence at all times, even though I know that’s if nothing else, bad theology.

I am not a believer in happily ever after, or fairy tales, or even that any man would ever look at me as more than a designated driver and/or Fetcher of Beer.  So I don’t know what good it might do me to pick open old wounds, but I guess I’ll find out.