I can’t help it.  But if the cars/owners involved were Camaros or Corvettes, that would be even funnier.

With the exception of rare genetic or congenital anomalies, gender is male or female.

Pick one.  Preferably the one that matches your plumbing.

I can’t say that I am celebrating in the streets or bathing my profile pic in a rainbow colored filter on Facebook. Nor am I shouting doom and gloom and proclaiming the end of the world because now Adam and Steve (or Annie and Eve) can get “married.”  Personally I believe that same sex relations are wrong in any context (and to me, positively vile)- but so are opposite sex relations out of their proper context (but I’ve been there with the heterosexual fornication and done that, hypocrite that I can be.)  I am not the Judge, nor do I want to be.  I’m guilty of “doing it wrong” too, just in a different way.

Two dudes.  Wonder who will clean up the piss splatters around the john?

However,  I don’t make a hobby of rubbing my straightness in everyone’s face and Making Them Like It.  I even use the term straightness almost lightly, as “asexual” is probably closer to what I am now.  I really don’t have any desire for physical contact with anyone.  I don’t like strange people touching me, and it’s been more years than I’d like to admit since I did anything other than sleep (or watch TV) in bed. The older I get the more averse to such things I become.

Even so, if you have found your “soulmate,” and you want to have at it like rabbits in heat, whether it be male, female, mechanical, inflatable, or gerbil, I don’t care.  Maybe I am a bitter, old, frustrated bitty, but I just don’t want to hear about it.  That’s in the same category as wondering whether or not your grandparents still have sex.  Some things should remain a mystery.

I don’t care if you have the hots for a ’93 Ford Escort.  I really don’t care how people get their jollies for the most part, or who they choose to land in bed with, or why.

It only bothers me when you expect me to call it normal.

You celebrate your holidays, I’ll celebrate mine.

I do have to wonder about the World Rabies Day thing.  Is this observation a call to inform people about rabies and to prevent the spread of rabies?  I can’t imagine anyone wanting to celebrate Rabies, but there are some real freaks out there.

In all seriousness, I don’t believe anything good or healthy is going to come out of legalizing same-sex marriage.  I don’t think it’s healthy to teach children that this an acceptable lifestyle.  I don’t want my grandchild witnessing gay groping and make-out fests in public.  Celebrating same-sex attraction to me is sort of like celebrating heart disease or cancer- or getting excited about rabies.  We know things like heart disease or cancer or some things that some people do in the bedroom (gay OR straight) are not good for you, and eventually any of those things can kill you- but then human beings can be destroyed by things that society has traditionally condoned.

For instance, overwork can kill you- (been really close to that one) but nobody has ever gone to great lengths to morally condemn those who live to work even though that can be just as much idolatry- and positively poison to your physical, spiritual and mental health as anything else.  Nobody really puts up an argument to exclude or demonize the addicted-to-work.  Especially when that work-addicted person is doing your work for you.

Overeating can kill you- and gluttony is a sin- but do we actively seek to exclude and shame the fat?  If fat shaming really worked, we would be a nation of Calista Flockharts, and I don’t see that happening.

Fanny is allowed to experience the feline lifestyle.  Fat and lazy is OK- for cats.

Perhaps the silver lining in the gay marriage movement is maybe the whole gay pride in-your-face attitude will become passé and less “trendy” now that it’s legal. Nothing serves so much as a buzz kill than making something once forbidden legitimate.

Maybe that’s why I pretty much gave up binge drinking by age 23. 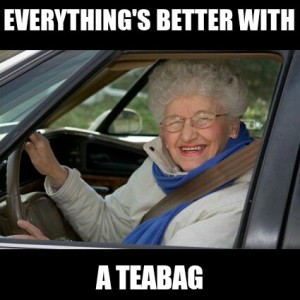 Sometimes Mom does not realize the absolutely horrendous double entendre she brings up.