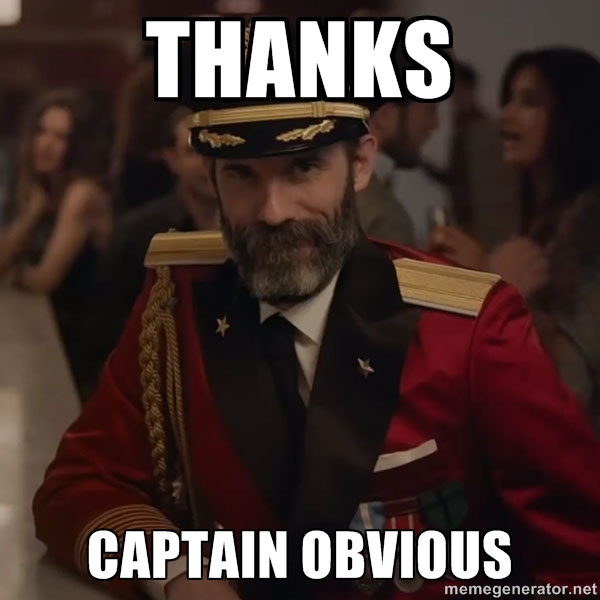 It’s sad that in this politically correct world, that young adults are encouraged to cling neurotically to “safe spaces” where they won’t be hurt by cruel (though often true) words.  It’s bad enough that these poor kids grew up believing that everyone gets a trophy, but to believe that everything is OK just because you can’t or won’t face reality is simply cowardice and stupidity.

Ignoring the present Muslim invasion is ignoring history.  Of course, history isn’t taught as it should be, for if it were, the Western world would  not have forgotten the lessons of the past.  One would think that the relatively recent rise and fall of Nazism and the end of Soviet Communism would serve as stout warnings against totalitarian and/or collectivist movements, but apparently stupidity dies hard.  Islam, in spite of being a false and counterfeit religion, has been around much longer than either Nazism or Communism.  It’s been in the death and deceit business a very long time.

As the world has witnessed over the past few decades of so-called Arab liberation, Islam is anything but peaceful. Islam does not seek to co-exist with other value systems, nor does it seek for its adherents to hold hands and sing about living in harmony with everyone.   It is more of a brutal and archaic socioeconomic system than it is a religion, even though in its barbarity it hides behind the worship of an ancient Arabic moon-god idol.  Islam deifies a false god that is most certainly NOT the One True God that Jews and Christians worship.  At best, Islam should be considered a nihilistic death cult that should be shunned and condemned by the civilized world.  Until just the past few decades, this was the position of the Western world.  Why we have felt the need to defend or protect those who belong to value systems that want anyone outside of that value system dead is beyond me.

I never want any female relative or descendant of mine to have to be enslaved by Islam- hidden behind a burqa, and beholden to the whims of “men” who think it perfectly acceptable to behead anyone they disagree with, and to fornicate with anything that has a hole in it.  Unless perhaps that something is a pig or a dog?  In a way I find it interesting that Islamic law considers dogs unclean.  There’s something about calling something good evil that smacks of irony here.

Clara is actually very clean for a dog.  And she doesn’t wipe her ass with her bare hand.

I can’t help but see a very clear lesson from the past.  Neville Chamberlain thought that if he appeased Hitler that appeasement would bring peace.  Nothing could have been further from the truth.  Ann Coulter has her usual catty and spot on insight on this here.

Obama (and with far less noble aims than Chamberlain) either thinks that he can buy peace from radical Islam by allowing their invaders to settle here freely, or he knows full well that he is opening the door to a foreign and hostile army by settling “refugees” in this country.  Considering Obama’s actions and affiliations in the past, he is most likely aiding and abetting Islamic terror with full purpose and intent.  Either of those above choices is a bad choice, because there is no brokering peace with an ideology hell bent upon war.  Inviting them in only makes the war all the more inevitable.  One does not appease alligators by feeding them.  Feeding alligators only makes them stronger and hungrier, as we should have learned from Hitler.

This is not the time for civility.  It is the time for blunt honesty no matter who gets butt hurt about it.  There are people who follow an ideology- Islam-  that calls for the death of everyone outside of that system.  Even though this ideology hides behind the façade of religion, in truth, we ignore the evil of radical Islam to our peril.

This is as good as anti-smoking propaganda gets- from 1870, no less.

Smoking was just as nasty then, it’s just everyone died from other stuff before they could live long enough for smoking to kill ’em.

The longer I’ve been an ex-smoker I absolutely hate the smell of tobacco smoke.  I don’t have much of a sense of smell, and I’m surprised I have that. Even so, the one thing I can always smell is cig smoke, even from far-off, which sucks.  Why can’t I smell peonies and lilacs in May, but I can always smell some inconsiderate bastard’s cigarette?

Perhaps it is cosmic payback for back in the day when I used to smoke at my desk- and it was perfectly cool to be inside, at work and hot-boxing smokes at the same time.   I’m sure I had to annoy someone with my two-pack-a-day habit of hot boxing 120 menthols down to the filters.  My car ended up smelling like a dragon’s colon- because the first thing I would do when I got in the car was light up.  The first thing I did when I quit smoking was pay the detail guys- dearly- to get the cig smell out of my Celica.  It was nasty, and the inside of the glass on a 2000 Celica is not the easiest in the world to get clean- especially the back glass. 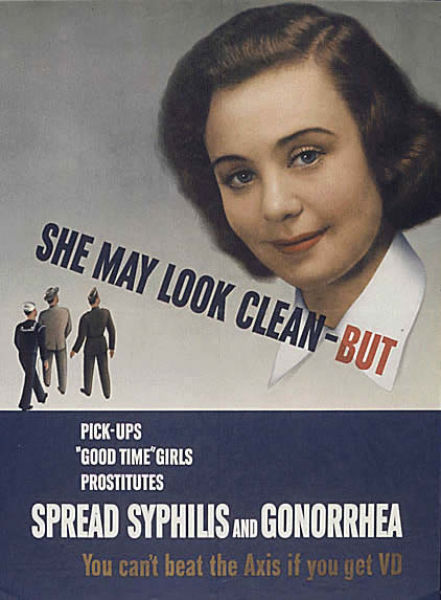 She just might be Hitler in drag, spreading the clap.  You never know.  Had to throw that in there. Public service announcement from 1943.

Yes, I am still fascinated with Victorian death art which is macabre, and I should find another hobby, but there is so much cool stuff out there – and not always dealing with the subject of death- which is public domain and is a lot better artwork than I could ever come up with.  I can scribble with Sharpies and that’s about it.  But the Victorians not only did some awesome artwork, there was some pathos there.  It was more grandiose than it should have been, and just plain treacly sweet, which made it cool.

You could get in trouble big time for displaying this in a public school.  You could offend the Muslims, the Jehovah’s Witnesses, the militant atheists, the Hare Krishnas, and who knows who else.

The irony here is that kids can go to public school and have this kind of drivel shoved in their faces and that’s perfectly okee-dokie:

As long as it’s not “Christian” or “Moral” in any kind of way, then we tolerate it, kids!

Then again, “tolerance” (especially as it’s defined in regard to political correctness and its associated idiocy) is the wrong word.  Tolerating something doesn’t mean we like it, and it doesn’t mean we encourage it.  I used to tolerate long-assed car rides in 70’s era cars (with no A/C, mind you) pinned in the center of the back seat between two sadistic siblings for hundreds of miles.  I didn’t like it.  I certainly didn’t encourage it.  But, being too weak to end up with any other position besides squashed in the middle, I had to tolerate it.

Tolerance- as it’s framed today- is actually appeasement, which is a very different concept.  Appeasement is the wussy position.   It’s the equivalent of feeding alligators.  No matter how much you feed the alligator he will always be hungry.  Just see how well it worked for Neville Chamberlain.  My oldest sister didn’t stop harassing me and stealing my stuff and kicking my ass just because I sat back and let her keep doing it.  She just did it all the more, until one fine day,  she took my car without permission and ran it out of gasoline and ran it low on oil.  I saw red, and took 17 years of retribution out on her in five minutes.  I don’t approve of physical violence, but something had to give somewhere, and I couldn’t keep on appeasing her any more.   Appeasement just let her know it was OK to keep on kicking my ass and stealing my stuff.  Kicking her ass taught her that it wasn’t OK anymore.

I bet Hitler got a lot of rides back in the day, at least in a figurative way. Carpooling still is a creepy thought though.  It would be my luck I’d end up with a serial killer or someone who insists on cranking up the country music. At least Hitler liked opera.

Hitler wasn’t a role model by any means, but he did have a taste for Wagnerian opera, and I can appreciate that.  I can’t say I approve of Nazism, genocide, or anti-Semitism, but Wagner did write some cool operas.  The only thing difficult about opera is that there aren’t too many operas written in English.  If you plan on going to an opera, or even plan on listening to a recording or watching a DVD, if you can get your mitts on a translation of the libretto first it makes a lot more sense.

I found a Victorian death card (these are common, and I will need to troll for some more good ones) that lent itself quite well to shall we say, electronic embellishment: 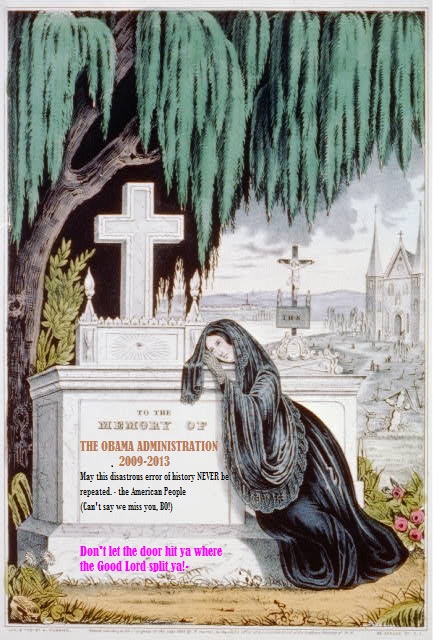 Should our current president fail to be re-elected, I’ll be printing these out and passing them out like party favors.