Winter can be beautiful as well as dark and lonely.

I can’t say that I’m sad or even melancholy.  I’m more in a sort of dark and pensive mode, which for me is a familiar, almost comfortable place to be.  My deep preference for solitude and quiet might be hard to explain to those with an extraverted personality, but for me it’s the mental equivalent of a warm fire and a relaxing easy chair.  The gardens of memory, like real gardens this time of year, are subdued and don’t appear to be as active on the surface.  Dormant, maybe, but not dead.

Of course it’s not as easy to turn off the world as it probably should be.  I am better at it than most, but I still have to deal with the practicalities of living and communicating with other people.  It would be nice to be able to tell a few people to go hang (or to just plain get bent) but I can’t shut down completely.  I’m afraid if I do that I won’t be able (nor will I want) to turn back on.

For me, every day is an act of the will to choose to interact with the world beyond my very restrictive sphere.  I don’t want to most of the time.   Today I would much rather prefer to take a trip to the Main Library in downtown Columbus and peruse and read and think in the quiet.  Unfortunately I don’t see a day coming where I can do that, unless I stop off there for a bit on my way to the Paper Nightie Appointment tomorrow.  I scheduled tomorrow and Friday off (I will pay for that one, but I need a little time away and I have the vacation time) so tomorrow I don’t have to scramble about and then have to endure the Paper Nightie Appointment.  I dread it enough as it is.  Friday I hope to finish getting Steve-o whatever Christmas gifts I want to get him- or better yet, meet him somewhere so he can pick out what he wants.

Most of my relatives have way too much crap to begin with, so I have to be creative.  Dad is quite enamored of the Angry Birds game, and he likes those men’s lounge pants that geezers wear around the house.  It should work.  What else can you buy for the man with the taxidermied squirrel on a skateboard? 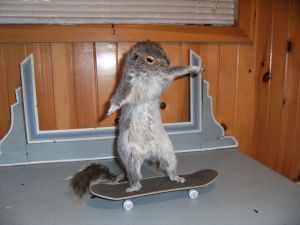 Yes, Dad really does have a taxidermied squirrel on a skateboard.

I learned a new word from the infomercials that pollute the airwaves from 2-4 AM.  Insomnia must have some advantages, if only to enlighten me to the wonderful world of such invaluable products such as the Pos-T-Vac, the Nu Wave, and the No-No.

I always thought that area that’s not your neck, not your tits and not your shoulders was simply the not-neck-not-tits-not-shoulders area.  Then I discovered the French actually have a word for the not-neck-not-tits-not-shoulders area.  It’s always good for me to expand my vocabulary.   They call it the décolletage or décolleté- meaning “sort of around the neck area,” and you’re supposed to slather expensive cream on it so it doesn’t end up looking all wrinkled and birdy.  One infomercial suggests you should blast this area with a radio frequency device you can also use on your face to ward away the birdy wrinkles.   ‘Kay….

All I could think of when I came upon this device was Oh. Holy. Shit.

If I feel the need to hook my face up to this, I have deeper issues than a few birdy wrinkles.

I can just imagine if I’d found this when I was five years old and had to use the bathroom in the middle of the night at Grandma’s.  Seeing Grandma’s and Grandpa’s dentures sitting next to the sink, glaring out at me from their soaking cups of Polident as I was taking a midnight whiz was enough to give me nightmares for a month.  It was bad enough that Grandma could remove her teeth at night. I could just imagine the insane terror my five year old mind would have gone through if I thought Grandma took her face off at night.

At first glance I thought the above alien face mask was some kind of device intended to turn someone into Lieutenant Commander Data from Star Trek: 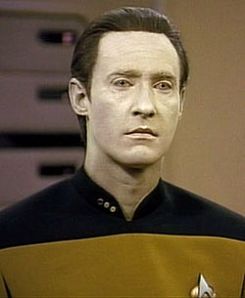 Of course women have been doing bizarre things to themselves to attempt to stem the inevitable tide of aging since the beginning of time. The truth is that entropy is always going to win.  Live long enough and your tits will bounce off your knees.

At least most women don’t still wear these awful things:

I bet they itched, too.

I have discovered many interesting things online that I can’t imagine anyone would have any sort of real practical use for, but people will buy anything on Amazon. Even this: It’s a model to practice doing prostate exams.  And you can have it in time for Christmas if you order it by December 23! 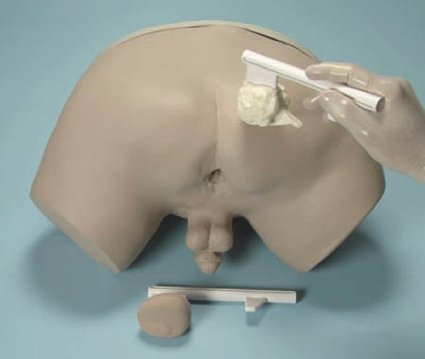 I have an idea for a new party game based on this: “Pin the Prostate on Bob”?