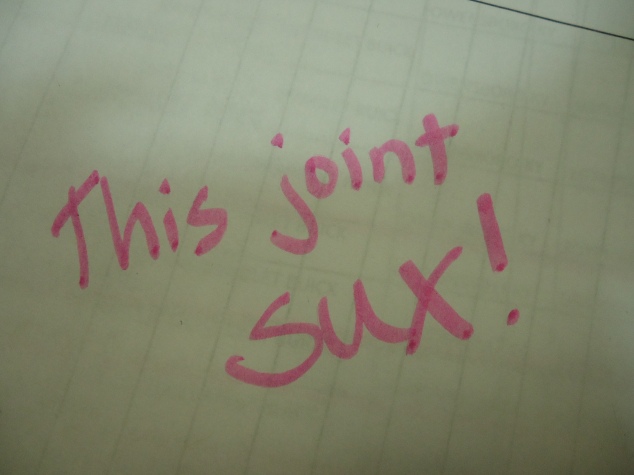 I admit I’ve never been a Walmart fan.  While I am cheap and I like saving money, I don’t like standing in line for hours (or trying to find a cashier when all the checkout lanes are closed) and I don’t like surly help.  I see their side of the issue- either you want it cheap or you want it with a smile, but you can’t have both.

I don’t blame the Team Members at Walmart.  Minimum wage with no benefits really sucks and is only one step up from being homeless and living under the bridge.  That I do understand, and it bites.  My only counter to that predicament would be that one will never get out of the minimum wage, part-time no benefits hole unless you do what’s completely counterintuitive.  Smile and be the best freaking Walmart stockboy you can be.  Or at least, learn English.

In a way it was a bit fortuitous that on my last visit to Walmart- the 6AM Quest for Pennzoil- my receipt included a survey/ sweepstakes entry.  I don’t think I will win their $1000 gift card, especially if they toss out all of the unfavorable surveys.  However, I don’t see that Walmart location ever getting a favorable survey.   I simply told the truth.  The place wasn’t clean.  The Team Members I encountered were downright surly. I don’t care if it’s 6AM, if you’re a 24 hour joint you at least have to have one or two people at the register, preferably somewhat motivated English speaking people.  The only ones who would remotely consider rating it favorably likely can’t understand enough English to complete the survey.  Maybe they would have liked it better if I had scribbled it out in crayon on a page from a Hello Kitty coloring book instead of submitting it online.  I know I would never give me the option to fill in the blank and comment on a survey.  That’s just asking for me to give it to you with both barrels.  Case in point- here is my commentary I gave on the Walmart survey when asked, “How may we serve you better?”

I have to say my visit to Walmart was highly disappointing.  I made the mistake of thinking I could avoid the rush by shopping at 6AM since you are a 24 hour establishment.  I understand that 6AM is not the busiest time of the day, but it might help if some of your team members on duty actually spoke the English language- that is, the ones that I can find who aren’t actively ignoring me.  It would be nice if I could buy a jug of Pennzoil in less than 45 minutes, 40 of which were spent trying to find a cashier available and willing to check me out so I could finally pay you and leave.

On a brighter note, while Martha Stewart might not have approved of the general squalor in your establishment, I am glad that I didn’t discover any feces or corpses on the floor, which was a plus. Then again, I didn’t look very hard for those either.  Perhaps the dead bodies and dookie are back in the grocery section or something.

Given my usual irreverence, I thought, for my own amusement, that I’d conduct a little non-scientific Walmart survey of my own.

Usually when I get surveys of any sort I try to be honest and I try to be complimentary if the compliments are due.  I remember all too well how seriously Toyota takes their dealer surveys.  If a Toyota dealer gets even a neutral survey, the district rep will be in the dealership and on the “offending” department like white on rice wondering what you did to make so-and-so’s experience anything less than “completely satisfying.”  If Walmart takes their surveys as seriously as Toyota does, (which I have to doubt,) someone there is in serious shit, and in my humble opinion the whole damned place should be.  It’s one thing to offer discounts on virtually everything, (I understand there’s a big difference between Nordstrom’s and Walmart,) but there’s no excuse for a complete lack of customer service to the point of not having one available cashier during business hours.

Now I should be reprimanding myself for being so derisive.  I have to admit not all Walmarts are this dismal, and I should know better than to think anyone has anything but illiterate and comatose help at 6AM.  I am grateful that my weekend didn’t end as badly as it started.

I have spent more time than most people in hospitals and Dr.s offices.  While I don’t enjoy it , I do have a certain comfort level in medical facilities that most people don’t have.  I understand a good bit of the terminology.  I know a good bit about common procedures- how they’re done and why.  I have to remember that poor Steve-o is not nearly as acclimated to such things and he freaks easily.  So when they had to take the baby to Children’s last Wednesday he was climbing the walls.

I have to admit that it was most unsettling to me Wednesday night to hear that my month-old granddaughter was barely responding, was dehydrated, had a high fever and had just been transferred to Children’s.  What Steve-o in his distress didn’t understand was that her mother and other grandmother took exactly the correct steps and got her immediate treatment.  If not for their quick thinking and fast action I shudder to think of the consequences.  Because she got treatment immediately – the cultures revealed that somehow she had gotten salmonella poisoning- she will recover completely and be quite fine.  Even so she was in the hospital from Wednesday night until Saturday afternoon.  Very few things are more distressing than such a tiny little one having to undergo IVs, blood draws, and worst of all, a spinal tap.  I never went through anything this serious with Steve-o.  He had a bad ear infection when he was 6 months old, chicken pox when he was a year old, and strep throat when he was 7, and that was about the worst of his infectious diseases.

Apparently salmonella is fairly common in the general environment and most adults have some immunity to it, but infants and small children don’t.  Even a very tiny bit of contamination would have been enough.  They threw out all her bottles and nipples and whatever formula and bought all new.  I hope that was sufficient to keep this from coming back.  I don’t like doing the hospital thing with adults,but there are few things more pathetic than a nine pound newborn strapped to an IV.   The good thing is she won’t remember a thing.  The bad thing is that I will.  I’m one of those people who does what needs to be done and for good or ill deals with the attending emotions later.  I stayed with her through the blood draw and helped keep her still and distracted enough to let the nurses do their job.  I never knew that the only way to find a newborn’s veins is with a bright red light shined under the arm.  Weird.

Yesterday I pretty much came home from church and the grocery and slept the rest of the day.  I hope next weekend that everyone is well -and that I can stay out of Walmart.